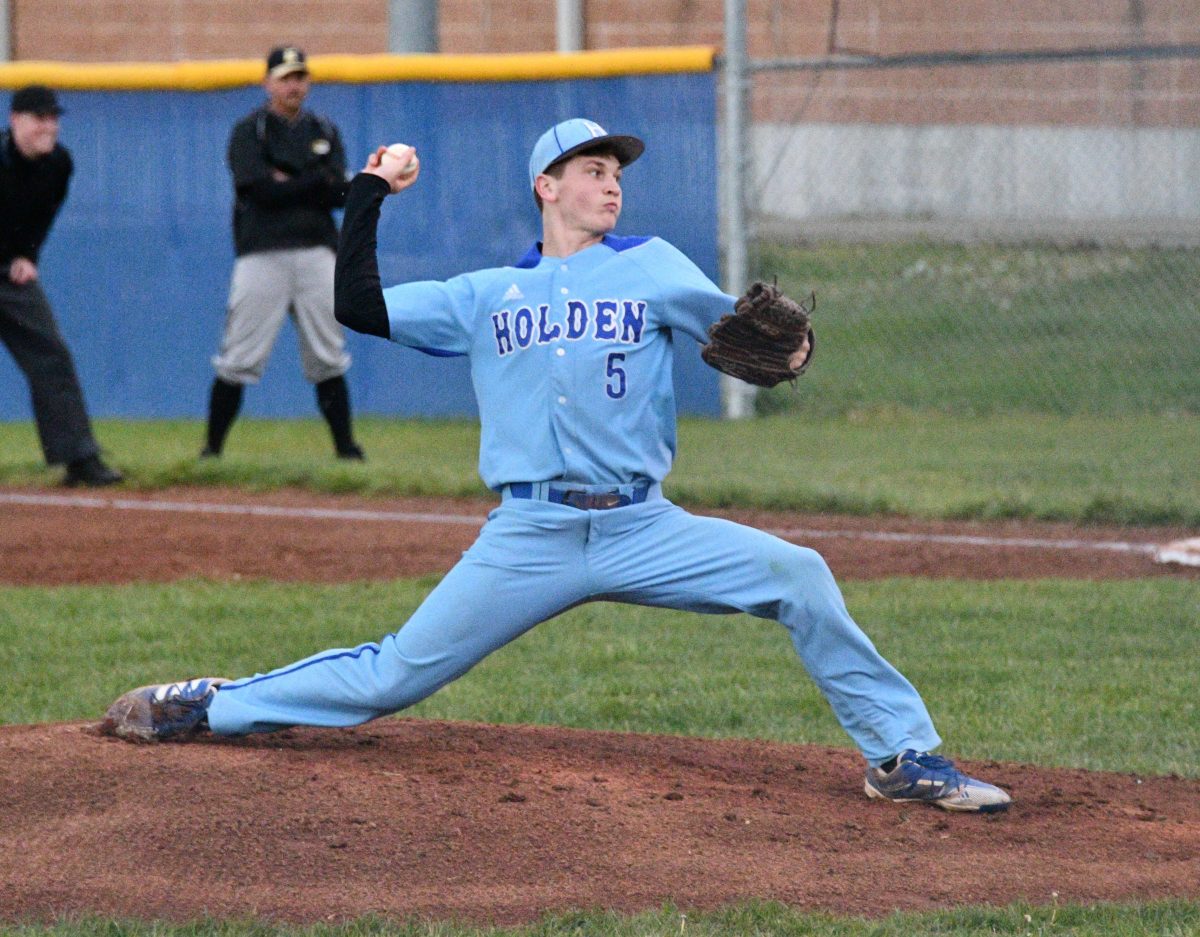 Season Starter… Eagle senior pitcher Danny Hartzler delivers a pitch to the plate during Holden’s home game against Excelsior Springs on April 23 last season. Hartzler got the call to start on the hill for Holden’s season opener at Reeds Spring High School on Saturday, March 19. Hartzler recorded three strikeouts in 3 1/3 innings. At the plate, Hartzler had three hits. The Holden baseball team won both games of a doubleheader versus the Wolves on Saturday to start the season with a 2-0 record. Photo by Steve Edwards

The Holden baseball team opened the season by collecting two wins on the road in a doubleheader at Reeds Spring High School on Saturday, March 19.

Game one of the two-game set went to Holden by the final score of 15-6 in a back-and-forth contest.

In the second game, Holden took the win by the final score of 17-9.

“Great way to start the season,” said Holden baseball head coach Charlie Castle. “We did a lot of good things, and saw some things we need to work on. Overall, our pitching was very solid, and we battled at the plate against a solid team.

“Defensively, we had a few lapses early in both games, but the kids responded to the aversity and stayed positive, hopefully a sign of things to come.”

“It was much closer than the final score as we scored seven runs in the top of the seventh,” said coach Castle. “We took a 2-0 lead only to give it up in the bottom of the first as they went up 3-2.

“We trailed 6-5 entering the fifth inning when we scored two runs, and then added one more in the sixth.”
Senior pitcher Danny Hartzler got the start on the mound against the Wolves with Aiden Morarity pitching in relief.
“Aiden Morarity picked up the win in relief,” reported coach Castle.

Morarity pitched 3 1/3 innings in which he allowed just one hit, no runs, and one walk while recording five strikeouts.
“Danny Hartzler started, and did ok,” said coach Castle. “He definitely got stronger as the game went on.”
Hartzler’s stat line shows six runs allowed, four of which were earned runs in 3 1/3 innings. Hartzler allowed five hits, and five walks while striking out three batters.

“Freshman first baseman Kale Tryon had a good game in his debut with a pair of hits, and a sacrifice bunt that led to a big inning when they threw it away,” highlighted coach Castle. “Morarity had four RBIs on a pair of hits while Carson Gard walked foru times, and ran the bases very well all night, scoring four runs.

The Eagles played from behind in their second game of the doubleheader for a comeback victory.
“We fell behind 7-1 after one inning as we had multiple errors, adn failed to close out the inning like we should,” noted coach Castle. “It was very frustrating.

“In the fourth inning, we scored 11 runs to go up 15-9 as we took advantage of several errors and walks.”
Sophomore pitcher Lane Siemer recorded the win on the mound.

“Lane Siemer pitched very well in getting the victory as he restored order to the game,” said coach Castle. “He went 3.1 innings, and I believe he just gave up one run. His stuff was good, and he was able to throw multiple pitches for strikes.
“He also hit well offensively. He had two hits with two RBIs.”

Multiple Eagle players put the bat on the ball in the comeback win.

“Offensively, Garrett Smith had a coule of hits with three RBIs,” reported coach Castle. “Gard also did well at the plate with two hits while making a couple of nice defensive plays, and adding a scoreless inning on the mound to close out the game.

“Freshman catcher Aiden Christian did a lot of positive things in his debut,” highlighted coach Castle. “He walked two times, and nailed a Reeds Spring baserunner attempting to steal. Christian caught all 14 innings.”