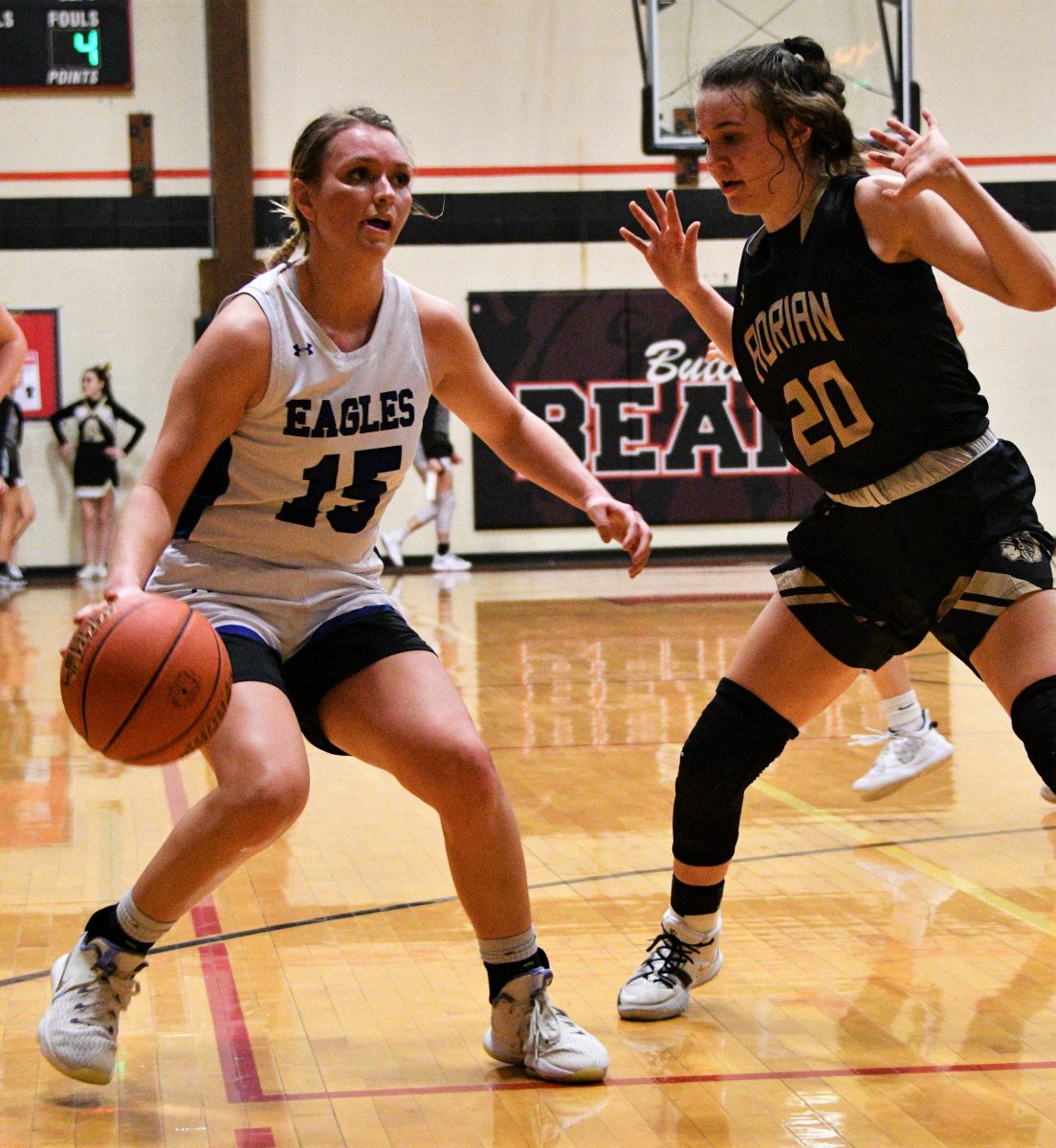 Wamsley’s milestone moment came on a two-point field goal late in the fourth quarter of the game to give the four-year Lady Eagles basketball team member 12 total points on the night.

Entering the game, the shooting guard stood 11 points shy of the 1,000-point mark. Though aware of the fact she was nearing the 1,000-point mark, Wamsley was a little surprised when her name was announced over the gymnasium loudspeaker in recognition of her accomplishment.

“During my trying to get 1,000 points, I never really wanted to know the exact number because I felt like if I got that in my head, I would just get too caught up with it,” said Wamsley after the game. “So I never really knew. I just knew I was close, and I just needed to execute and everything.

“My family, and everyone told me that I needed 20,” said Wamsley with a laugh. “They’re like, you need to get 20 points this game. I’m like okay.
“When they turned on the announcement, I wasn’t really expecting it.”
A two-point basket made by Wamlsey after two missed free throws put her one point away from 1,000 career points.

With an unplayed conference game against Carrollton still up in the air as far as a reschedule date at the time, Holden girls basketball head coach Ben Kiger hoped Wamsley would reach the 1,000-point mark in the Adrian game.

“I told her when she missed those two free throws, and actually when she missed another shot, ‘Please don’t score 10 points,’ because obvioulsy, there’s always that chance that we don’t play that game,” said coach Kiger who went on to describe the senior all-district player’s work ethic during her career which was aided by the teammates surrounding her.

“I told the team it’s a great individual accomplishment when somebody scores 1,000 points, but I’m going to quote Bob Knight,” said coach Kiger. “I think he had a guy by the name of Andre Emmett who scored a ton of points. A reporter asked him about that. He said, ‘Did he pass it to himself? Did he set himself screens?’

“So while that’s a great individual accomplishment for Abby Wamsley, and believe me, she has put in the work to shoot…that little step-back three she hit, it doesnt surprise me. She put in that much work.

“That’s also Valorie Slack, that’s Leah Robinson, that’s Camille Davidson, that’s all of these girls trusting her to score for us. It’s a great individual accomplishment for her to do that basically in three years, but it’s also a team accomplishment. Every girl on this team has passed her the ball, and said, ‘Hey, we trust you to hit this shot.’”

With her accomplishment in the books, Wamsley summed up the process which elevated her to that moment, and tipped her cap to the group of players she played with during her four-year career which began with a total of three varsity points scored during her freshman season.

“I think just putting in the work every single day as much as I could, and just really trying to work on my shot, perfect my shot…just really working on the basics, honestly,” said Wamsley. “But most of all, having my teammates there with me, like setting me up, giving me those drives that they gave me, and everything like that. I got 1,000 points because of them, and also my hard work.”

The Holden girls basketball team went on to play a make-up conference game at Carrollton on Monday, February 28.

The Lady Eagles won the game by the final score of 55-37 to finish as conference co-champions with Carrollton. Both teams finished with an MRVC-East record of 9-1.

Wamsley scored a team-high 20 points in the win over Carrollton to finish with 1,021 total points scored in her four-year Holden Lady Eagle basketball career.