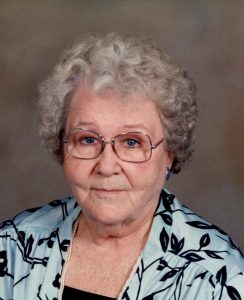 Dorothy M. Connell, 100, of Holden, Missouri, passed away Tuesday, February 16, 2022 at her home, surrounded by her loving family.

She graduated from Latour High School, Class of 1940.

She was united in marriage to Ralph Reidy Connell on April 10, 1942 in Latour.

Dorothy resided in Kingsville, Latour and Holden for the majority of her adult life.

She was a wonderful cook and enjoyed preparing meals for her family.

Dorothy was preceded in death by her husband, Ralph.

A Graveside Service was held at 2 p.m. on Monday, February 21, at the Medford Cemetery, south of Holden, with Pastor Dexter Snyder of Forward Community Church officiating.

Pallbearers were her grandchildren.

Memorial contributions may be left to St. Jude’s Children’s Hospital or the Medford Cemetery Association.

Arrangements were entrusted to Williams Funeral Chapel in Holden.