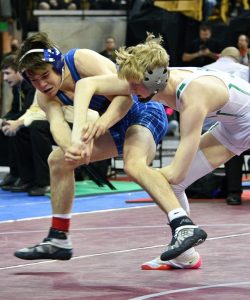 A Point Of Emphasis… Eagle sophomore wrestler Daylen Greene (left) escapes from St. Michael the Archangel wrestler Lucas Barry during the third-place match at the 2022 MSHSAA Wrestling Championships. The point scored by Greene on the escape in the second period stood as the lone point in the match as Greene secured the third-place medal on a 1-0 win by decision. Photo by Steve Edwards

Holden 120-pound wrestler Daylen Greene ended his sophomore season on the medal podium at the 2022 MSHSAA Wrestling Championships with the all-state third-place medal draped around his neck.

The sophomore Eagle wrestler finished the three-day tournament held at Mizzou Arena in Columbia on February 17-19 with a record of 4-1.

His third-place state meet finish is the second of his career after placing third last season in the 113-pound weight class.
Greene and senior wreslter Logan Yoder both represented Holden on the medal stand after Yoder took fourth place in the 132-pound weight class.

Greene began his second state meet apparance by pinning Lawson wrestler Laren Dietz in the first round on Thursday.
Greene backed up his first-round win with a pin against Higginsville wreslter Zach Conner.

Waiting for Greene in the 120-pound semifinals was returning state champion Brayden Dubes from Centralia who handed Greene a setback last year at the state meet.

The Centralia junior worked to a win by pin over Greene to put the Eagle sophomore in the consolation semifinals.

“Dubes especially was a heartbreaker,” said Greene after the tournament. “I had a couple good matches with him this year. He’s the same one that beat me in the semis last year. It didn’t go the way I wanted this year at all. I could have given him a better match, at the very least.”

Greene bounced back with a win by decision in his consolation semifinal matchup with South Harrison wrestler Mason Hamilton.
The third-place bout featured a rematch between Greene and St. Michael the Archangel wrestler Lucas Barry who had defeated Greene a week earlier in the district championship match.

In a strategically wrestled match, a point scored by Greene on an escape in the second period proved to be the margin of difference between the two wrestlers on Saturday as the Eagle grappler secured the third-place medal in a 1-0 win by decision.

“It was a dominating one-nothing win,” said coach Jones. “ It was complete domination. I know, you would think a score 1-0 isn’t much, but we dominated from neutral, we had every position that we needed from neutral. He could have scored more in neutral. Then on bottom, he easily got up, and then we rode him the entire third period.”

In regard to capturing the second medal in his two seasons of wrestling as he developed into a team leader, Greene noted, “It’s not the same approach coming in. It’s working harder every year…trying to make everyone around me better. It was great. Logan has always helped me with a lot with the leading aspect of everything. I just appreciate him for that.”

Greene finishes with a sophomore season record of 44-6.