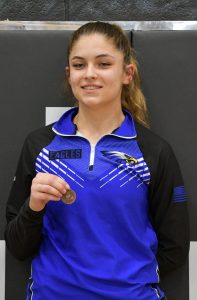 “Everybody had a goal coming in,” said Holden girls wrestling head coach Ron Franklin. “For the most part, most of the girls met their goal, and they were realistic goals.”

Gregg exceeded the number-five seed she held entering the tournament in the 130-pound bracket with her third-place finish. She led the Lady Eagles team on Saturday by recording four wins by pin while taking one loss.

The sophomore opened the tournament with two wins by pin. Gregg’s lone setback was suffered in the championship quarterfinals when she was pinned.

On the consolation side of the bracket, Gregg rebounded with wins by pin over Cassville wrestler Hailey Roark, and Branson wrestler Sarah King.

““I knew that I was going to have to wrestle Hailey Roark, which I had lost to her at Seneca, so I was like like pretty down, pretty discouraged,” said Gregg. “Then, I realized that a girl I beat, beat her, so then, was using that as motivation. I’m pretty proud of myself for getting this far, considering I had to wrestle her because she pinned me the last time I wrestled her.”
Gregg’s wins over Roark and King kept her in contention for a top-four state qualifying spot.

“I am proud that Charlie bounced back,” said coach Franklin. “She recovered. That girl she beat from Cassville has beat her (before). That’s the number-two seed.”

On Monday, Gregg won her consolation semifinal bout by fall in the first period to earn a spot in the third-place match.

“I was just thinking about wrestling well, not focusing on just winning, but fundamentally and mentally,” said Gregg.

In the third-place match, Gregg pinned Harrisonville wrestler Melaina Beacher in the second period after fighting through a near fall in the first period.

“She wrestled the perfect tournament,” said coach Franklin. “The one mistake she made on the first day, she recovered from, and she made up for it the whole time. She pinned six girls in this tournament. She’s the leading pinner in the entire district tournament.”

With her all-district finish, Gregg becomes Holden’s second state qualifier after Tasia Lee advanced to the state meet last season.
“It’s just exciting because last year we got quarantined, so we didn’t have the chance,” said Gregg. “It feels good to get back at it this year.”

Lee returned for the district tournament this year in the midst of recovering from an offseason surgery. The returning all-district medalist, and sectional champion from last season suited up for a couple of late-season dual meets, yet had no opponents to compete against in her weight class at those duals.

Lee recorded a win by pin on Saturday in this year’s district tournament before dropping two matches.

“It felt amazing,” said Lee. “I didn’t get to wrestle all through the season. Coming into districts my first match, it felt…I don’t know, like speechless. I was crying, believe me. I was pretty emotional. I just came in, and I tried my best…gave a hundred percent.

“It’s been amazing. I’m so happy that we have a total of eight,” added Lee in regard to the Lady Eagles team. “We used to have nine, but some stuff happened and we were understanding about it. Just watching them, and how the sport’s growing, it’s amazing how just everything’s coming along.”

Wrestling in the 149-pound bracket, junior GiGi Jones recorded two wins versus two losses to close out her first season of wrestling in which she gained the opportunity to wrestler for her father John Jones who serves as the Holden wrestling program’s head coach.
“This season, I thought I actually improved a lot,” said GiGi.

In regard to wrestling for her father, GiGi noted, “It’s actually really fun because at home we can talk about wrestling, and then he’s like, ‘Oh, you need to do this, this, and this.’ No matter what, home or at school he’s always helping.”

Second-year wrestler Aubree Castaneda turned in one win versus two losses in the 194-pound bracket.

“Honestly, this was a very good learning experience for me because I didn’t go to districts last year,” said Castaneda. “This year, I got to see a state champion my first match of districts, and I really learned a lot in that match on how to keep my stance and defend it.
“This year, I have learned a lot more moves per se, and how to be more mentally tough,” added Castaneda. “You have to be very mentally tough to wrestle because it’s all you, it’s not a team effort, it’s just all you.”

“Valarie got a win,” noted coach Franklin. “Valarie said that’s what her goal was, to get a win, and she got it. Alex met her goals, too. She got a win. She actually came in, and had some realistic goals and she met them both today.”

The Girls Wrestling State Championships will be held at Mizzou Arena in Columbia, February 17-19.