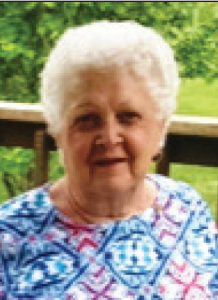 June was born June 7, 1929 in Holden, daughter of Tom and Mildred (Meade) Bradbury. She graduated from Holden High School, Class of ’47.

She was united in marriage to Clark Scrutchfield on December 11, 1948 in Warrensburg.

The couple made their home in Holden.

June was employed for several years at Holden Manufacturing, until its closure in 1993.

She enjoyed sewing and flower gardening.

She was preceded in death by her husband, Clark; two sisters, Marian Young and Dorothy Goodman; and two grandchildren, Aaron Lerda and Lane Elizabeth Scrutchfield.

Ryan Scrutchfield was an honorary pallbearer.

The family encourages everyone to wear face masks.

Memorial contributions may be left to the Elm Spring Cemetery Association.