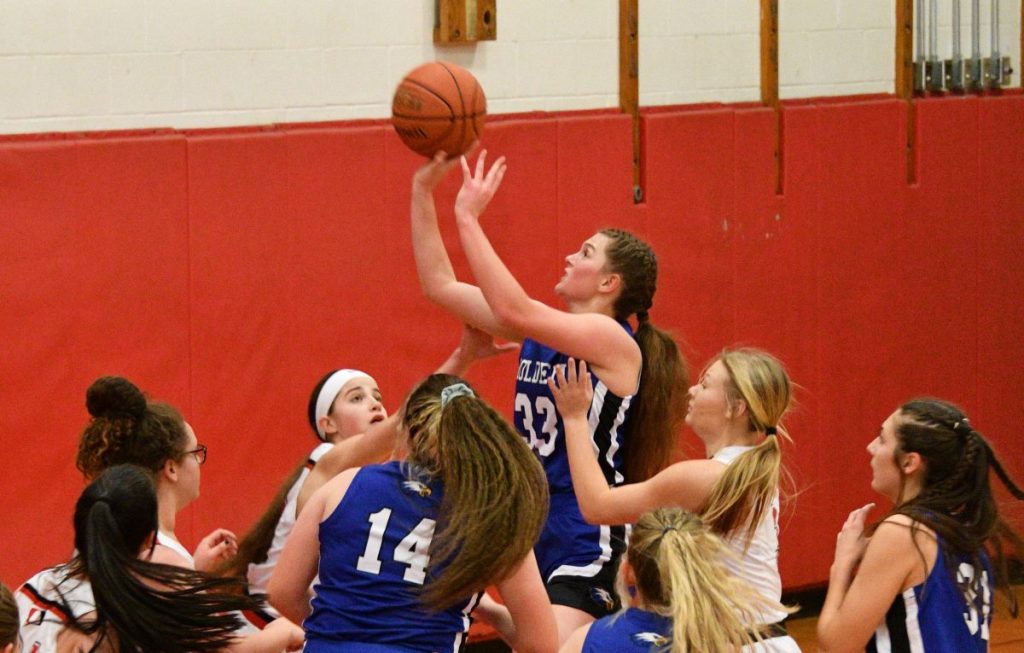 Coming off of a home loss to Warrensburg a week earlier, the Lady Eagles basketball team responded with a 46-34 road win over Odessa on Friday, Jan. 21.

Leading the Lady Eagle charge were Abby Wamsley with 15 points, and Millie Davidson with 14 points as Holden led throughout the contest to play the role of spoiler in Odessa’s Senior Night game. “It was kind of a long week,” said Holden coach Kiger. “It was good to get off that bad taste of the Warrensburg game. “I thought Millie had a pretty good game. She’s still a little banged up.

She was six-of-eight from the free throw line…not to bad for being banged up, and being out for a long time.” Davidson put up five points in the first period to go with four from Liz Stout, and two from Wamsley as the Lady Eagles took an 11-8 lead after one period of play.

Wamsley closed out the second quarter by draining a three-point basket from the right wing with eight seconds left.

Wamsley’s basket set Holden up with a 24-13 halftime advantage. “Abby hit two big, monumental threes,” highlighted coach Kiger. “The three in the second quarter, and she hit the three in the fourth quarter that kind of pushed us back up. “Her little sis Rachel goes out there, and hits a gigantic three in the third quarter when we’re kind of struggling to score,” added coach Kiger.

Following a field goal from Lady Bulldog Hailey Dukes, and a made free throw from Rylee Adams to cut Holden’s lead to six points midway through the fourth quarter, freshman Lilee Keller laid in a basket on a break.

Wamsley followed Keller’s bucket by draining the three-pointer mentioned by her head coach to put the Lady Eagles up by 11.

Holden’s lead would not fall below 10 points after Wamsley’s trey as the Lady Eagles closed out the game to avenge last year’s 51-40 home loss to Odessa.

“We fouled them too much, but my key was on the Moody girl,” said coach Kiger in describing Holden’s game plan which set its sights on Odessa senior Lexi Moody.

“Last year, she scored 26 points against us. This year she has 11, and that’s kudos to Marah (Klover), Brady (Hinton) guarded her a little bit, and then, Lilee came in and finished the job on her. “Lilee played a pretty good game for a freshman. “I thought there were a lot of good contributions,” continued coach Kiger. “Jaci Gower goes in there, and she had a couple of hustle plays. She gets a rebound, and a put-back. All the people who played in the game, I thought had a lot of really, really good contributions. “I’m just really proud of all of the girls. Marah stepped up. Her and Millie led us in free throw shooting. “I love that almost everybody who played scored. Even if you didn’t score…I mean, J’Lee Jones gets a huge rebound. There are all kinds of things that lead to us being successful. “This team has matured. We took some of our knocks last year, but this year, even though we’re going through some crazy lineups, they’re still staying with it…coming out with a victory.”

As noted, Abby Wamsley led Holden with 15 points. Davidson followed with 14 points. Stout had 7 points. Rachel Wamsley scored 3 points. With 2 points each were Gower, Keller, and Klover. Hinton scored 1 point on a made free throw.

After last week’s win over Odessa, the Holden girls basketball team held an overall record of 10-5, and stood at 4-1 in MRVC-East play.

This week, the Holden girls basketball team plays in the Crest Ridge Tournament.

Holden defeated Knob Noster by the final score of 53-20 in the first round of the tournament on Monday.

The Lady Eagles play Sherwood in a semifinal round bracket game at the tournament on Wednesday at 6 p.m. Final round games will be played on Friday and Saturday.

The time and opponent for Holden’s final round game is to-be-determined.

Lady Eagles JV Defeats Odessa The Lady Eagles JV team won a two-quarter contest against the Odessa JV squad by the final score of 19-9 on Friday, January 21. After trailing 5-4 in the first quarter, a made free throw by Lady Eagle player Lilee Keller tied the game.

Two successful free throw attempts from teammate Jaci Gower put Holden ahead 7-5 at the end of the first quarter.

Keller finished with a team-high 7 points in the junior varsity win over the Lady Bulldogs.

Young finished with 2 points. McHenry scored 1 point on a made free throw.

Lady Bulldog Brooklyn Wade scored all 9 of Odessa’s points in the game.