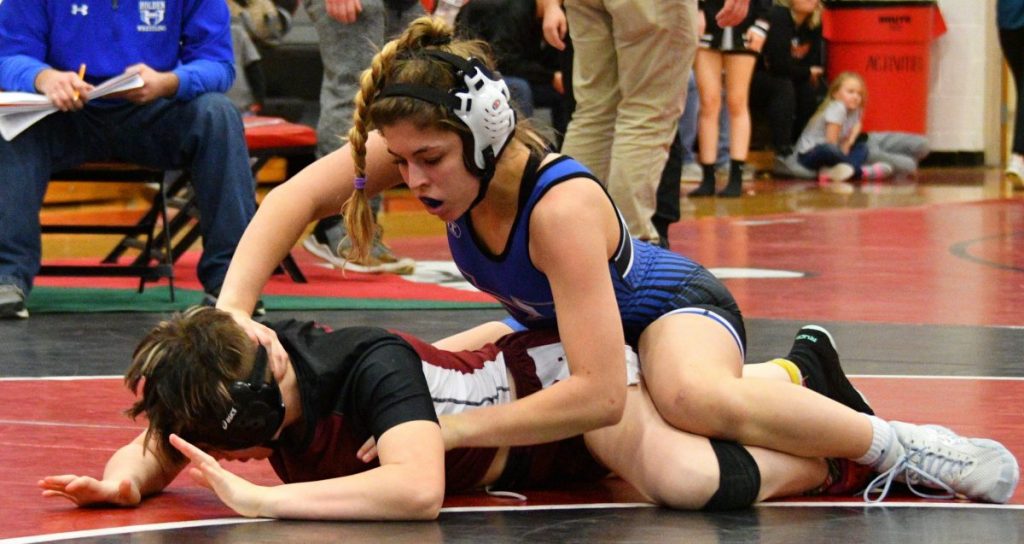 Lady Eagle wrestler Charlie Gregg led the Lady Eagles by totaling four wins versus one loss on the day in a third-place medal finish in the 130-pound bracket.

Gregg swept through her three pool matches with three wins by pin before falling by pin in the championship semifinals. “I kind of came in with the mindset of winning,” said Gregg. “It was pretty upsetting when I lost my semi match, but I feel like I definitely could have beat her. “There were just some things that are minor mistakes that I’ve got to work on.” In the third-place match, Gregg pinned Warrensburg wrestler Ari Brown. Gregg opened the second period of the third-place match with a quick reversal on Brown which led to a pin 45 seconds into the second period. “I just go in feeling for what’s there,” said Gregg of her early move that positioned her for the win. “I have a game plan for what’s there. I don’t go forcing moves. I just felt it there.”

In the 149-pound round robin competition, Jones recorded one win, and two losses. Jordan Sylvester placed fourth in the 159-pound bracket.

Sylvester opened her tournament with a win by fall in pool competition.

After dropping her bracket semifinals match, Sylvester fell by pin to Pleasant Hill wrestler Alana Thelin in the third-place match.

Lee placed second in the 142-pound weight class as a freshman at the inaugural Girls MRVC Tournament held on January 29, 2020.

This season, Lee is recovering from an offseason surgery.

She was on hand last Friday coaching, and supporting her Lady Eagle teammates at the tournament.