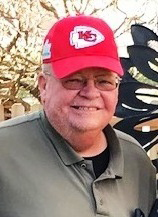 Shortly thereafter, he went to work for the Holden Water Department.

Russell was united in marriage to Deborah Sue Fitzgerel on September 9, 1989 in Holden.

The couple resided in Harrisonville prior to moving to Blue Springs.

Russell was employed with Cass Co. Water Dept., #5 at the time of his passing.

His passion was farming.

There will be a private graveside service held at the Medford Cemetery with Pastor Rob Allen of Holden United Methodist Church officiating.

Memorial contributions are suggested to Medford Cemetery Association or the charity of giver’s choice.