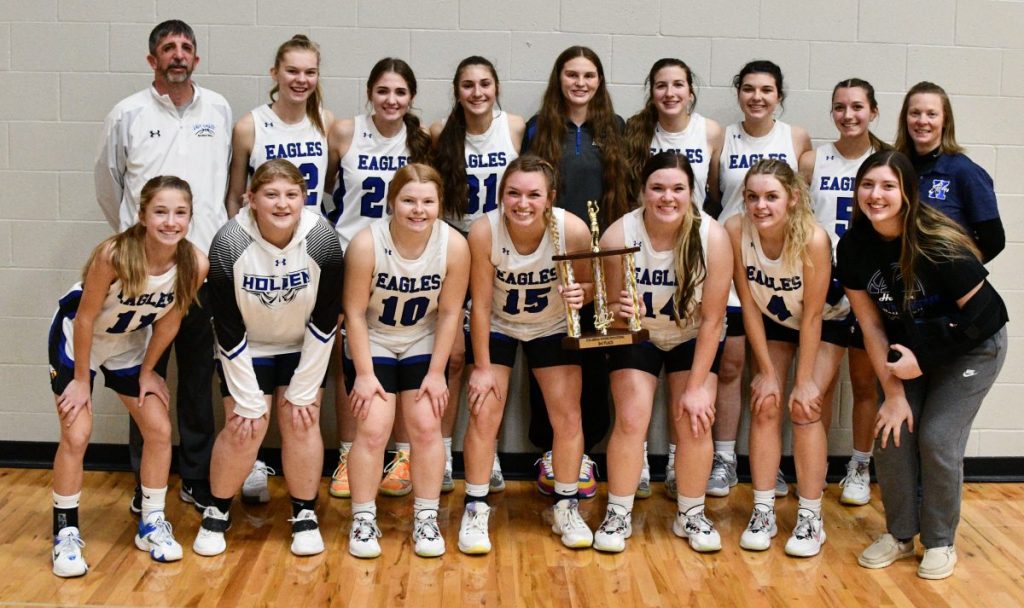 The Holden girls basketball team captured the third-place trophy at the Stover Tournament by defeating Jamestown by the final score of 43-24 on Friday, January 7.

An 11-3 advantage at the end of the first quarter eased Holden into the contest for the remainder of the game. “We got off to an 11-3 lead, and then I thought we kind of just coasted,” said Holden coach Ben Kiger. “Overall, it was a good win, and everybody pretty much got in the scoring book. When you can have seven girls score, that’s pretty good.”

Holden guard Alli Iles connected on two three-pointers in the second quarter to combine with Wamsley, and Lilee Keller for 10 Holden points in the period.

Jamestown posted eight points in the second frame to send Holden to the halftime locker room ahead 21-11.

Wamsley drained a three-point basket to open the fourth quarter.

Sophomore guard Rachel Wamsley joined her senior sister in the scoring column by following Abby with a two-point field goal.

The senior Wamsley finished with a team-high 17 points in the win. “Really my teammates just gave me all the points that I had,” said Abby. “It’s really just not a one person effort. It’s a team effort, so I’m really grateful for all my teammates.” Iles drained two free throws in the fourth quarter. J’Lee Jones connected on one charity shot for Holden’s final point of the game. “We had really balanced scoring,” noted coach Kiger. “I thought Alli Iles had a really good game.” Iles’ performance on the defensive side earned recognition from senior teammate Abby Wamsley. “Alli had a really good steal one time, and I was like that was all you Alli,” said the senior Wamsley.

Iles finished with 8 points in the game which ended a streak of consolation trophy wins by the Lady Eagles as they moved up to the third-place finish this year. “It felt really good because we usually never win the first game, so we’re always in the consolation bracket,” said Stout who last year scored nine points in Holden’s consolation game win over Versailles in the Stover Tournament. “So winning the first game as a team, especially as a senior was really good. This is going to boost our confidence for the rest of the season.”

Senior forward Brady Hinton summed up the Lady Eagles’ performance in the third-place win. “I think we started off kind of slow, but in the end we finished,” said Hinton. “That’s all that really matters because we got the W. It’s not how you start, it’s how you finish.” Klover finished with 7 points. With 2 points each were Rachel Wamsley and Keller.

Jones totaled 1 point on her fourth quarter free throw. Lady Eagles Edged By Eugene Prior to playing in the third-place game, the Holden girls basketball team fell to Eugene by the final score of 39-35 in the championship semifinals of the Stover Tournament on Tuesday, January 4. “We were very even,” said coach Kiger. “We missed a couple of shots late that would have given us that win. We just didn’t make enough shots to win that game.” Versus Eugene, Abby Wamsley scored 13 points for Holden.