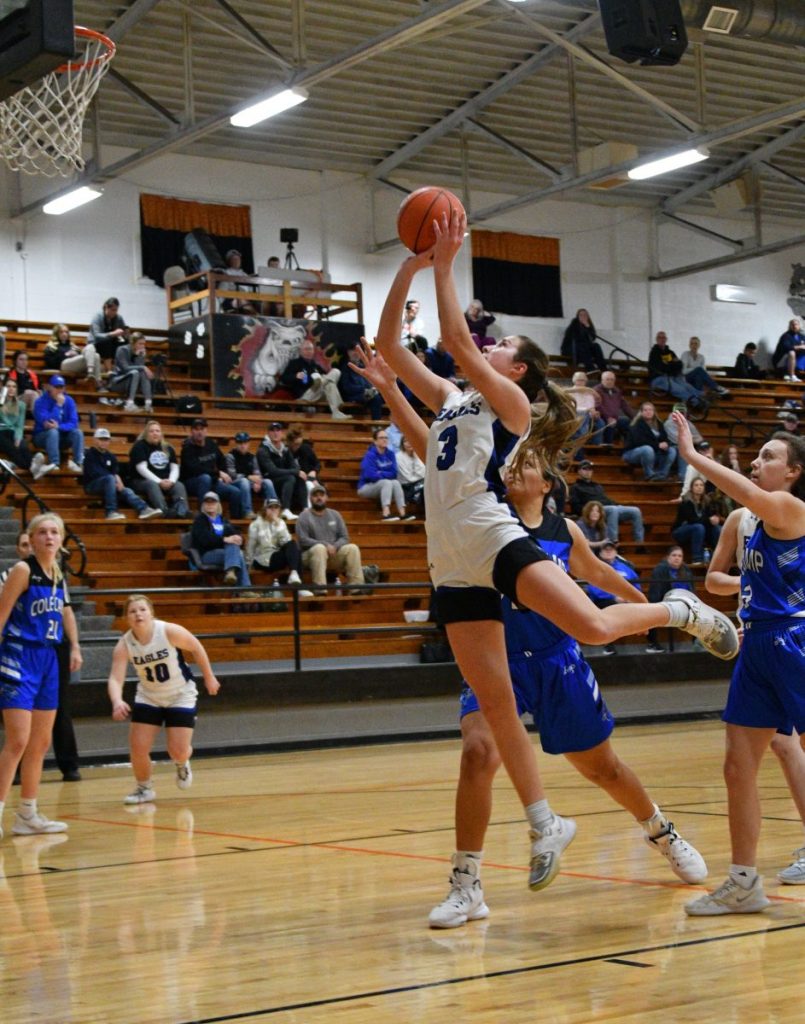 Fast Break Points… Lady Eagle point guard Alli Iles (3) takes the ball to the hoop for two points during the second half of Holden’s first round game in the Stover Tournament on December 29. Iles finished the game with nine points as the Lady Eagles defeated the Lady Bluebirds of Cole Camp by the final score of 40-31. Photo by Steve Edwards

The Lady Eagles basketball team gained a spot in the championship semifinals at the Stover Tournament by defeating Cole Camp in the first round by the final score of 40-31 on Wednesday, Dec. 29.

After playing to a 16-16 halftime tie, the Lady Eagles found a 12-3 advantage in the third quarter to separate from the Lady Bluebirds. “We didn’t move the ball in the second quarter,” noted Holden coach Ben Kiger. “In the third quarter, we started moving the ball.

Liz Stout got a couple buckets. She had a couple drives. It was really pretty even scoring. “We had 16 out of Abby Wamsley who hit a couple big threes to kind of push it to a comfortable lead. “Marah Klover had an absolute monstrous game,” continued coach Kiger. “She scored eight points, and she kept a lot of plays alive.” In the game, junior forward Alli Iles moved to the point guard spot to fill in for regular floor general Millie Davidson who is out with an injury. “Alli Iles had nine points,” highlighted coach Kiger. “We’re still down our point guard. I knew Alli Iles would be our back-up point guard, and sure enough, she’s filling in, kind of taking care of business now.”

Both teams closed out the game by putting 12 points on the scoreboard in the fourth quarter.

A two-point bucket from Iles that was followed by a three-pointer from Wamsley put Holden ahead by 11 points in the fourth quarter.

That lead was pushed to a 16-point advantage after Wamsley downed a shot from inside the arc, and followed that with a three-point bucket.

A late free throw from Harms set the final score at 40-31. “Defensively, I thought we had a really good game,” said coach Kiger. “Twenty-one (Kyla Harms) hit a couple threes there late, and we kind of knew who their shooters were. “Brady Hinton and Lilee Keller did an absolute monstrous job on number twenty-three (Desiree Heimsoth).

She is probably the best post player we have faced this year. We held her to five points.” As noted, Wamsley finished with a team-high 16 points.

Iles totaled 9 points that included a couple break-away lay-ups in the fourth quarter.

Klover had 8 points which included one three-point basket. Stout stacked 6 points in the scoring column.

Jaci Gower made had 1 point on a made free throw. The Holden girls basketball team was scheduled to play Eugene in the championship semifinals of the Stover Tournament on Tuesday of this week.

Game results were not available at press time. With a win over Eugene, the Lady Eagles would play in the tournament championship game this Friday, Dec. 7 at 8:30 p.m. in the Stover Dome.

With a loss to Eugene, the Lady Eagles would play in the tournament third-place game this Friday at 7 in the Stover Dome.