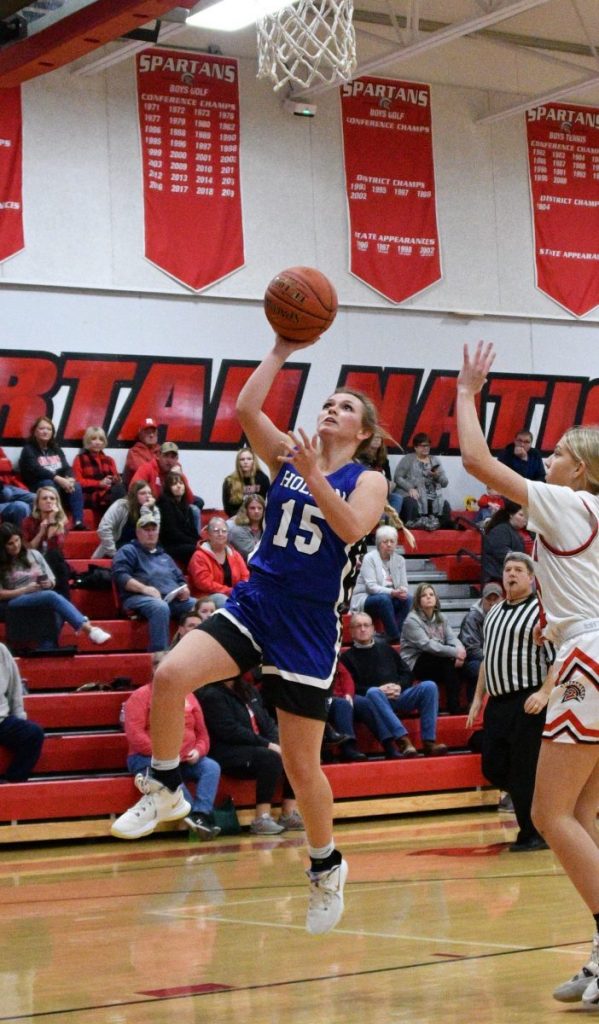 Career Game In Conference Win… Lady Eagle senior guard Abby Wamsley lays in a basket for two points in Holden’s conference road game at Richmond on Monday, December 20. Wamsley tied her previous career-high of 28 points in the contest as the Lady Eagles defeated Richmond by the final score of 47-29. Photo by Steve Edwards

Following a 5-0 scoring run by Holden to start the game, Richmond gradually worked back into the game to take the Lady Spartans’ only lead of the contest with the score at 6-5.

The Lady Eagles closed out the second quarter on a 10-0 run with points from Wamsley, Jaci Gower, and Millie Davidson as the Lady Spartans were silenced late in the second.

The second quarter surge that was closed out on a three-point basket from Wamsley, sent the Lady Eagles to the locker room with a 24-13 lead, and command of the contest. “The Richmond game was a good one,” said Holden coach Ben Kiger. “I think that 10-0 run at the end of the half took a little of the wind out of their sails, and put us in charge. “We came out in the third quarter, and outscored them 16-5. Our defense was really good! After a couple of threes by them in the first quarter, we locked down on them.”

Davidson sank a free throw for Holden late in the third before Wamsley hit back-to-back three-pointers to end the quarter with Holden ahead 38-18. “On offense, we moved the ball really well,” highlighted coach Kiger. “Abby just happened to be the one open in a lot of situations, and her teammates found her. “She scored 15 points in the third quarter. Historically, she has had good games in that gym. Twenty-eight ties her career-high. “It was another game where we shot 70 percent from the free throw line,” added coach Kiger. “Really good game all around from everyone.”

Marah Klover and Lilee Keller each made a free throw for 1 point apiece.

Career-High Note…Abby Wamsley’s first 28-point game occurred in a breakout performance during her sophomore season. In that game, Wamsley put up 28 points against Versailles on Dec. 30, 2019, in the consolation semifinals of the Stover Tournament.

Versus Versailles, Wamsley connected on three, three-point shots, and eight shots from inside the arc. She scored Holden’s first point of the game on a technical foul shot before any time ran off the clock when Versailles was issued a technical foul for a player jewelry violation. Wamsley converted one of her pre-game foul shots, and finished the game with three total free throw conversions.

Graduated Lady Eagle guard Leah Robinson with 9 points, and then-freshman Millie Davidson with 22 points also scored career-high point totals in Holden’s game against Versailles in 2019. In her 28-point performance versus Richmond this season, all of Wamsley’s points were scored in the first three quarters.