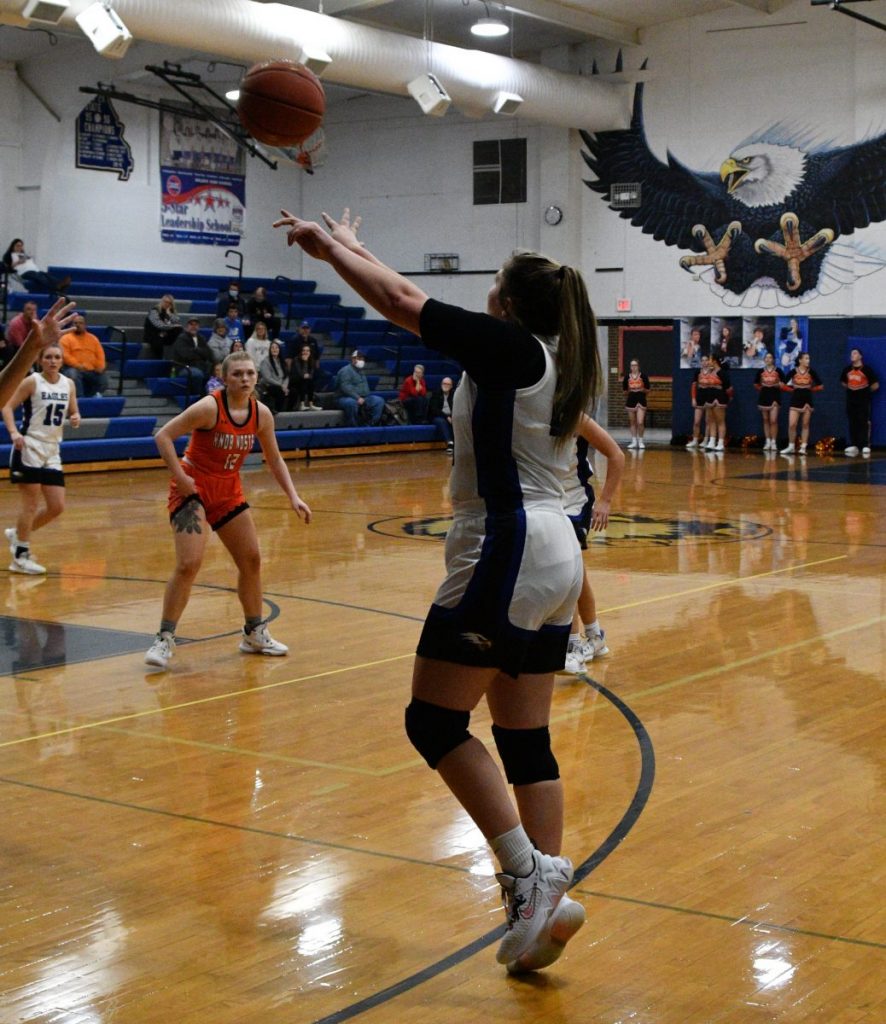 Displaying its most potent offensive performance of the season, the Lady Eagles basketball team defeated the visiting Knob Noster Panthers by the final score of 53-31 on Thursday, December 16.

“I told them one of the keys was we had to get out to a fast start, and I think we kind of did that,” said Holden coach Ben Kiger.
Six points from Abby Wamsley combined with two points each from Davidson, Jaci Gower, Alli Iles, and Rachel Wamsley with Marah Klover sinking a free throw, led to a 15-4 lead for the Lady Eagles at the end of the first quarter.

“That whole hodgepodge group that honestly hasn’t played much together are led by our captain Abby Wamsley,” said coach Kiger. “She did a great of communicating. Then she goes out, and scores 13 points. She set people up.

“You can see we’re balanced in scoring. That’s exactly what we need. Everybody contributes. Millie leads us with 15 points.”
The head coach listed the obstacles the Lady Eagles faced in picking up their first MRVC-East win of the season. “Millie’s injured. Alli Iles is sick tonight. Kayla Rokusek is going to have surgery on Monday.

In the second quarter, Abby Wamsley added a three-pointer, Davidson scored six points, and Klover sank a field goal for the Lady Eagles to take a 27-13 lead into the halftime locker room.

Holden weathered a 12-9 scoring advantage posted by the Lady Panthers in the third period.

“Third quarter, I kind of thought all year we’ve come out good,” noted coach Kiger. “In this third quarter, we really didn’t.”

Six players put points on the scoreboard in a 17-point fourth quarter for Holden with Lilee Keller and J’Lee Jones entering the scoring column.

“I told the girls in the locker room, ‘Sports is poetic,’” stated coach Kiger in regard to Rokusek’s final three-point baskets in her last game before a shoulder surgery scheduled for Monday following the Knob Noster game. “The fact that Kayla Rokusek in her last game hits two threes…that’s kind of what she did for us before her shoulder just failed her.

“It’s kind of an emotional thing for me because man, I love that kid,” added the head coach in regard to Rolusek. “I’ve had her since she’s a freshman. I know what she could have been. She just had some injury issues. It’s a sad deal.”

Rokusek finished the game with 6 points on her two fourth quarter three-point baskets.

As noted by coach Kiger, Davidson led the Lady Eagles with 15 points, and Abby Wamsley finished with 13 points.

Coach’s Corner
Coach Kiger assessed the season after the Holden girls basketball team’s 53-31 win over Knob Noster which left the Lady Eagles at 1-1 in MRVC-East play, and 4-2 overall on the season.

“It’s just a good win,” said the head coach, factoring in the difficulties the team overcame to secure the win, and the upcoming lineup changes the squad will face. “Rachel Wamsley hits a huge three in the third quarter, and I really think that’s where her game is. She’s a sophomore who is going to have to step up.

“Honestly, J’Lee Jones could have scored more than one point. She had more opportunities. We had opportunities. Jocelyn got some good minutes in there.

“Lilee Keller is a freshman. Lilee Keller has been sick all week. Again, she’s gritty, tough,” continued coach Kiger. “Alli Iles is covered up all day, and goes out and plays. It’s just a toughness.

“Alli does so many good things. She’s going to feel some pressure when Millie’s gone, and we’re going to be without Liz for a while. That’s an all-district player. There aren’t many teams that can absorb the loss of an all-district player, but when you’re led by seniors like Abby and Kayla, you get to do that. That’s just kind of what you do.

“I’m glad I got Kayla’s moment. We’re back to war on Monday.

“At this point, we’ve just got to stack wins. That’s what it’s about.

“It’s all hands on deck, for sure,” concluded coach Kiger.

On Monday of this week, the Lady Eagles defeated the Richmond Lady Spartans by the final score of 47-25. Look for the complete game article in next week’s edition of The Image.