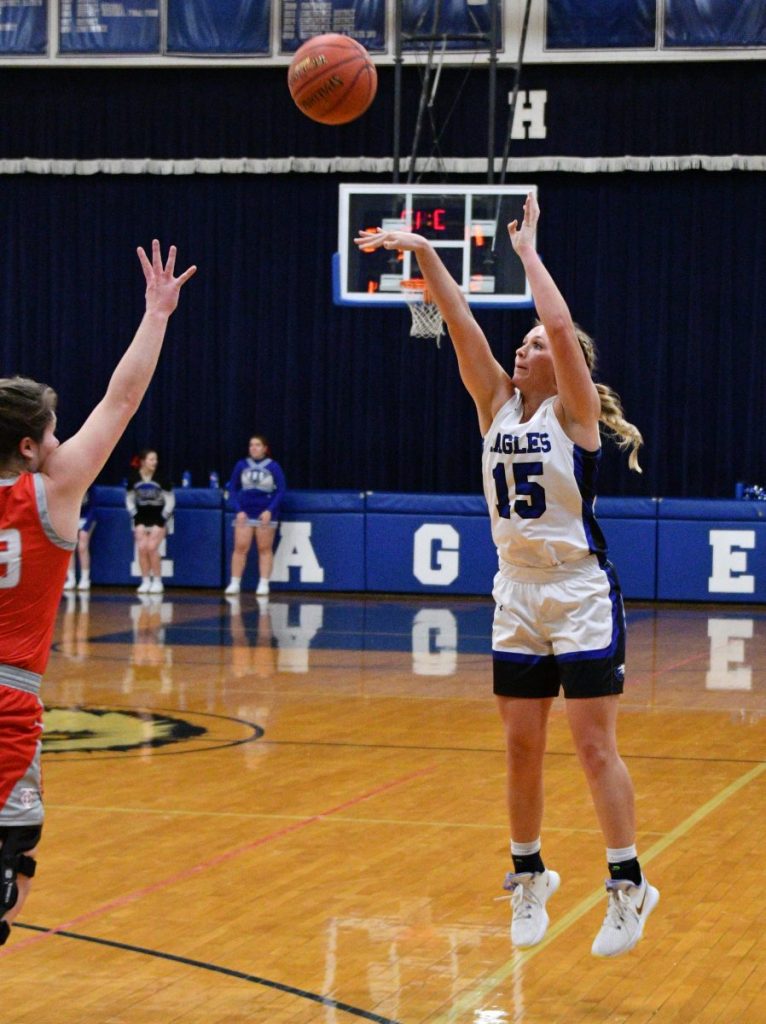 Playing in Holden’s Courtwarming game, and their first MRVC-East game of the season, the Lady Eagles basketball team fell to Carrollton by the final score of 44-37 on Tuesday, December 7.

A 7-3 advantage at the end of the first quarter for Holden was overtaken by the Lady Trojans in the second frame for a 17-14 Carrollton lead at halftime.

“The biggest thing was we went through a long drought where we couldn’t score, and we turned the ball over,” said Holden coach Ben Kiger, pinpointing Holden’s second quarter slump. “They hit four big threes during that drought, which got them control of the game.”

Holden temporarily regained the lead in the third quarter on a basket by Abby Wamsley, and two made free throws from Davidson to open the second half.

The two teams exchanged lead changes in the third quarter with Carrollton taking a 29-24 lead into the fourth.

Carrollton closed out the final eight minutes of the contest with one field goal, and 13 made free free throws for 15 points in the fourth quarter. Ochoa hit five charity shots in the final period, finishing the game as Carrollton’s leading scorer with 15 points.

Liz Stout, Wamsley, and Davidson combined for 12 points in the final frame as the Lady Trojans held on for the win.

“We missed 12 free throws in really a two-possession game,” assessed coach Kiger. “We also for the first time this year didn’t rebound well. We gave up too many second chance points.”

As Carrollton put two players in double digits, the Lady Eagles had one.

“Abby had 16 points, and was pretty consistent the entire game,” highlighted coach Kiger in regard to Wamsley’s season-high point total which included six of Holden’s seven first quarter points.

“We will need to buckle down in our road conference games to stay in the hunt,” stated the head coach after last Tuesday’s game which leaves the Lady Eagles at 0-1 to start the MRVC-East season.

This Thursday, December 16, the Holden girls basketball team hosts Knob Noster for a conference match-up. The JV game on Thursday starts at 5:30 p.m. The varsity game follows with a scheduled start time of 7.