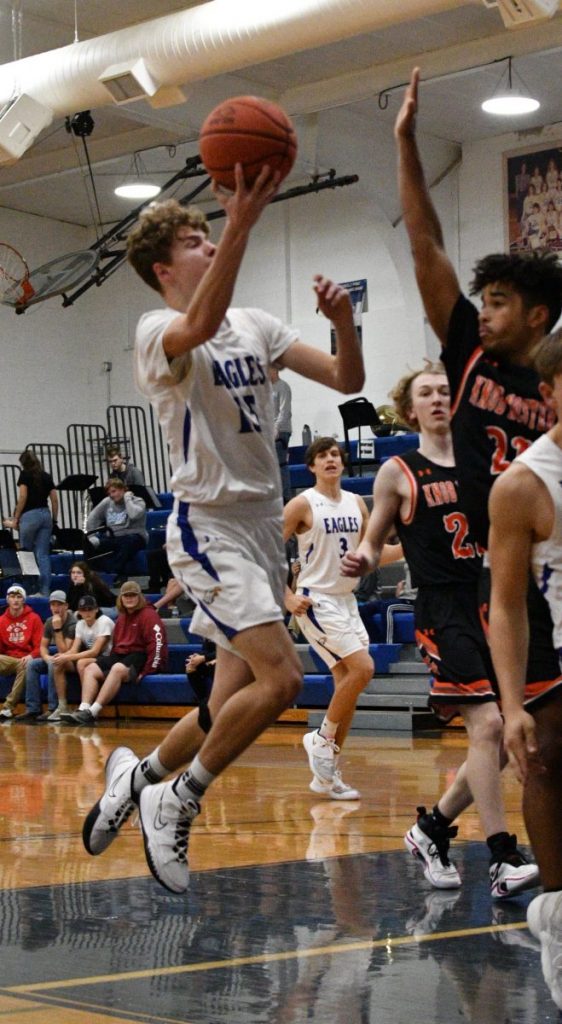 Senior Shot… Eagle senior guard Jarrin Brown drives to the hoop for a shot during Holden’s home conference game against Knob Noster on Friday, December 10. Brown finished the game with five points as the Eagles fell to the Panthers by the final score of 67-51. Photo by Steve Edwards

The visiting Knob Noster boys basketball team used an early advantage to work to a 67-51 conference win over Eagles on Friday, December 10.

The Eagles found themselves behind 25-13 at the end of the first quarter in an otherwise evenly played contest.

Holden threatened late in the fourth quarter by cutting the Panthers’ lead to eight points.

With the Eagles coming off of a loss to Carrollton three nights before in which Holden scored 29 total points, head coach Nathan Martin focused on Holden’s improved effort versus the Panthers.

“The energy was different tonight,” said coach Martin. “I think everybody could see it in the gym a little bit. The guys were more confident on offense, and we handled their press really pretty well. We were able to attack out of their press.

“Just way too many easy shots for them.”

“We always talk about helping the helper, and we have somebody step up,” described coach Martin. “Then today, we didn’t have anybody falling in, and helping the one who helped them.”

A one-point 14-13 advantage was displayed the Holden in the third quarter.

The Eagles closed the third quarter on a seven-point run. During the points run, Aiden Morarity scored a basket, Jarrin Brown connected on two free throws, and junior forward Garrett Smith converted a free throw after being fouled on a made basket.
The rally continued into the fourth quarter with Morarity scoring a two-point bucket. Josh Taylor followed with a two-pointer, and a three-point basket off of a steal to cut Knob Noster’s lead to nine points.

After a one-for-two trip to the free throw line for Panther guard Tim Williams, Smith scored a two-point basket to put Holden down by just eight points.

The Panthers posted their own late surge to pull away for the win.

The head coach credited the defensive press of the Eagles, combined with the attitude of the offense for the comeback attempt against Knob Noster. “Us being confident on offense…going to the bucket, and I think Josh hit a three in the middle of the run which helped us, too.

“That’s what we’re kind of looking for with telling them our defense is going to help our offense a little bit. Tonight in the second half, it did.”

“It was good to see,” said coach Martin of Smith scoring some solid inside points on the post. “Garrett was happy in the locker room. He came up, and said he finally played with a little confidence, which is good because we’ve been preaching to our guys…be confident when you’re out there.”

“Jarrin didn’t score a whole lot, but he did a lot of things on the ball…a lot of driving, drawing two guys, and passing to an open guy,” highlighted coach Martin. “So he did some good things.

“Hunter defensively has been impressive in our press. Before the Carrollton game he had 19 steals already in the season, which is a lot. I don’t know how many steals he got tonight, but he definitely got a bunch of deflections on the ball.”

The Eagles now stands at 1-5 overall, and 0-2 in MRVC-East play with no games scheduled for the team this week.

The Holden boys basketball team plays a conference game at Richmond this coming Monday, December 20. The boys C team plays at 4:30 p.m., the JV team plays at 5:30, and the varsity game closes out the evening with a scheduled start time of 7:30.