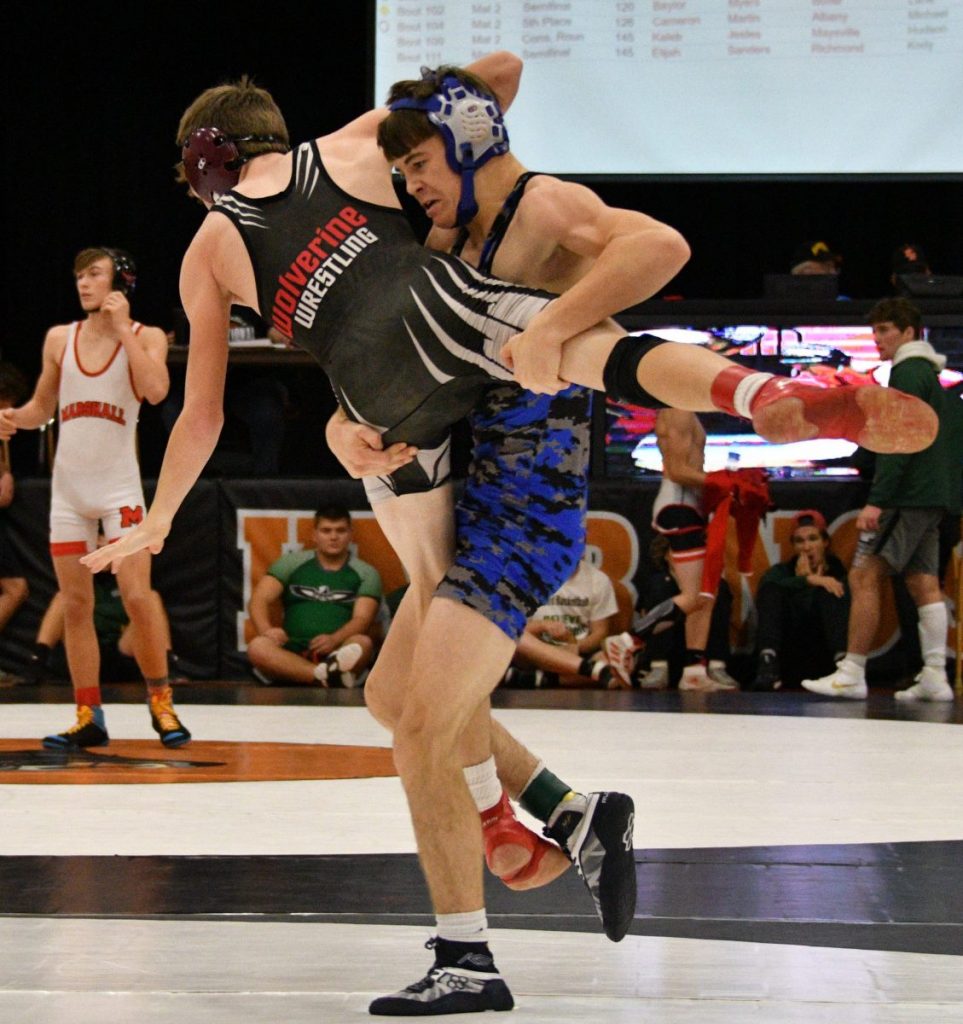 The Holden team flirted with a top-three team trophy finish throughout the day, settling for fourth place in the end.

“We thought we had a good showing,” said Holden wrestling coach John Jones. “We had some very exciting matches.” Eagles wrestlers Carson Moreno, and Daylen Greene placed first in their weight classes. “We wish we could have medaled,” said Greene in reference to the Eagles seeking a tournament team trophy. “It would have been nice. We had a lot of guys wrestle hard, wrestle smart. Everybody gave it their best effort as a team.”

Moreno recorded three consecutive wins by fall on his way to the first-place medal in the 113-pound weight class.

Moreno defeated Richmond wrestler Cayden Morris by fall in the first-place match. “Carson Moreno had a big match in the finals against a Richmond kid who has beat us in the past, and we beat him,” noted coach Jones.

Greene placed first in the 120-pound weight class by recording a first-round win by fall, and a win by major decision in the semifinals.

Greene defeated North Callaway wrestler Lane Kimbley by a 4-2 score in an ultimate tie breaker in the first-place match. “I want to highlight Daylen’s match,” said coach Jones. “What happened does not indicate the dominance Daylen had over the kid.”

Greene added, “It could have been a lot better, but I knew I had to win that match for the team…for myself.”

Yoder recorded a win by major decision, and a win by fall before falling in the first-place match. “Logan had a big match against Connor Teat from Richmond, and it didn’t go like how we wanted,” said coach Jones. “But it was good. It was a big match. Other than that, he wrestled well.” Yoder assessed the first tournament performance of his senior season. “My day started off really good, but I had kind of a disappointment in the finals,” said Yoder. “I think we had a great day for the team. We really went out there, and we did our stuff. “We did what we’ve been working on, and there’s a lot of heart out there.” CJ Reifsteck also recorded a second-place finish for Holden.

Reifsteck took the silver medal in the 170-pound weight class with two wins followed by a loss in the first-place match.

In the 285-pound class, Aiden Christian rebounded from an early loss by recording two wins.

In his final round robin match, Christian surrendered the match after suffering an injury.

He finished in third place in the heavy weight division. “Aiden’s match didn’t go the way we wanted, but he was a highlight of the day,” said coach Jones. “Aiden wrestled well.” Graysen Thieman at 106 pounds, and Kody Conard at 145 pounds each placed fourth.

Trent Stout recorded one win versus two losses in the 152-pound weight class with no official placing recorded.