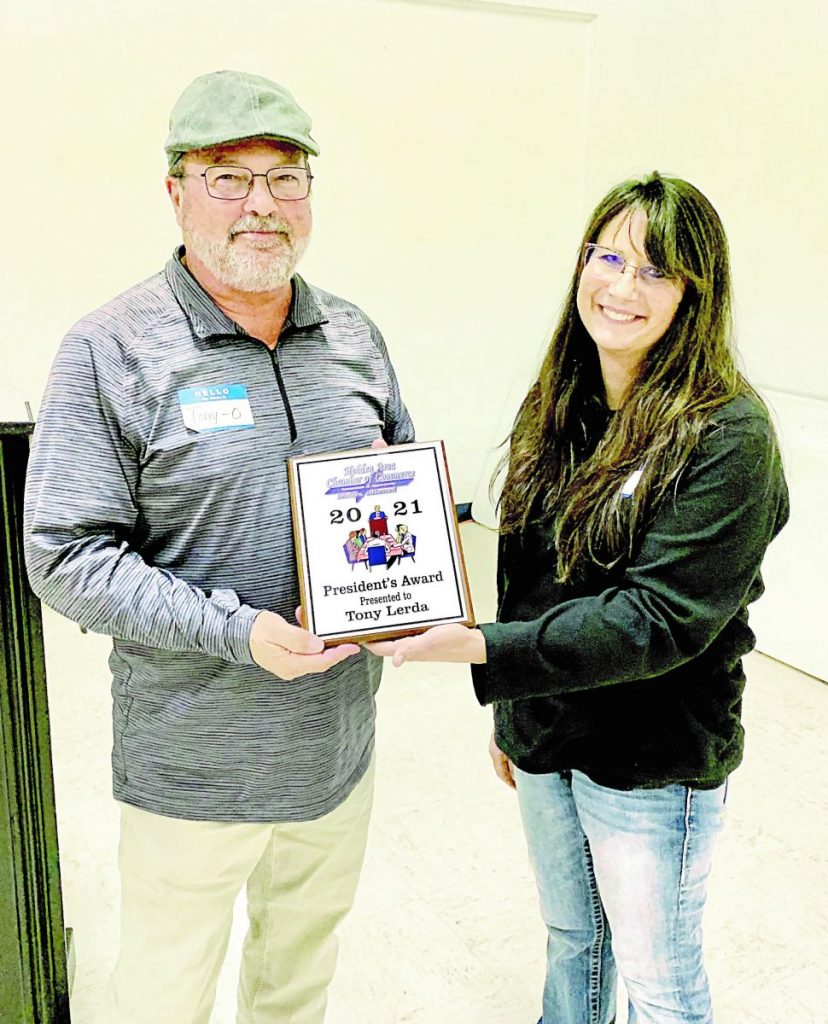 The Holden Area Chamber of Commerce hosted a Murder Mystery Dinner Theater as the entertainment for the 2021 Annual Chamber Awards on Friday, November 5, 2021, at the Hallar Building.

The entertainers came from the Kansas City area from a company called The Dinner Detective.

Aliases were chosen at the door as guests of the event entered.

The evening was challenged by sound issues due to the building acoustics, but it seemed that most everyone enjoyed the meal and community gathering.

Following the entertainment, Annual Awards were given.

Chamber President Jennifer Smithson made the award presentations on behalf of the Holden Area Chamber of Commerce.

In 2020, the Chamber board approved a new award to be given and have decided to continue this award – the Holden Hope Award. Recipients of this award have been noticed “Making a difference by giving HOPE to others in the community.”

The 2021 Holden Hope Award was presented to Holden R-lll Foundation.

Foundation Board President Sally Davidson accepted the award on behalf of the Foundation.

Sally said that the Holden R-lll Foundation couldn’t do what they do without the generous donations from the community, businesses, and organizations.

The Holden R-lll Foundation was started in 2004 and continues to promote learning, teacher grants and scholarships for the Holden R-lll School District.

Holden Main Street gives an award to someone that displays a true heart for the community.

The award this year was given to a couple that spends extensive amounts of time repairing, painting, watering, and beautifying the downtown area, as well as the Holden City Park and just about any other place they see the need.

David and Naomi Chastain were presented with the 2021 Heart of Holden Award.

The Horizon Award is given each year to any community member that has gone above and beyond to make something happen that broadens the horizons of our community and helps us to succeed into the future.

Phil Tevis was presented with the 2021 Horizon Award for his extensive service during the MoDOT Highway project and his role working alongside MoDOT to complete the downtown electrical project.

Phil gave up contracts, worked hard to get discounts on materials, and sold excess supplies to recoup funds for the Chamber on this project.

The President’s Award is given to the person chosen by the president as someone that has helped them throughout the year to better the community.

Someone who spent much of their time outside of normal work hours meeting with engineers, working out details and explaining what he had learned to the rest of us.

Tony Lerda was presented with the 2021 President’s Award for all the work he did to make sure the MoDOT highway project was completed and benefited the residents of Holden.