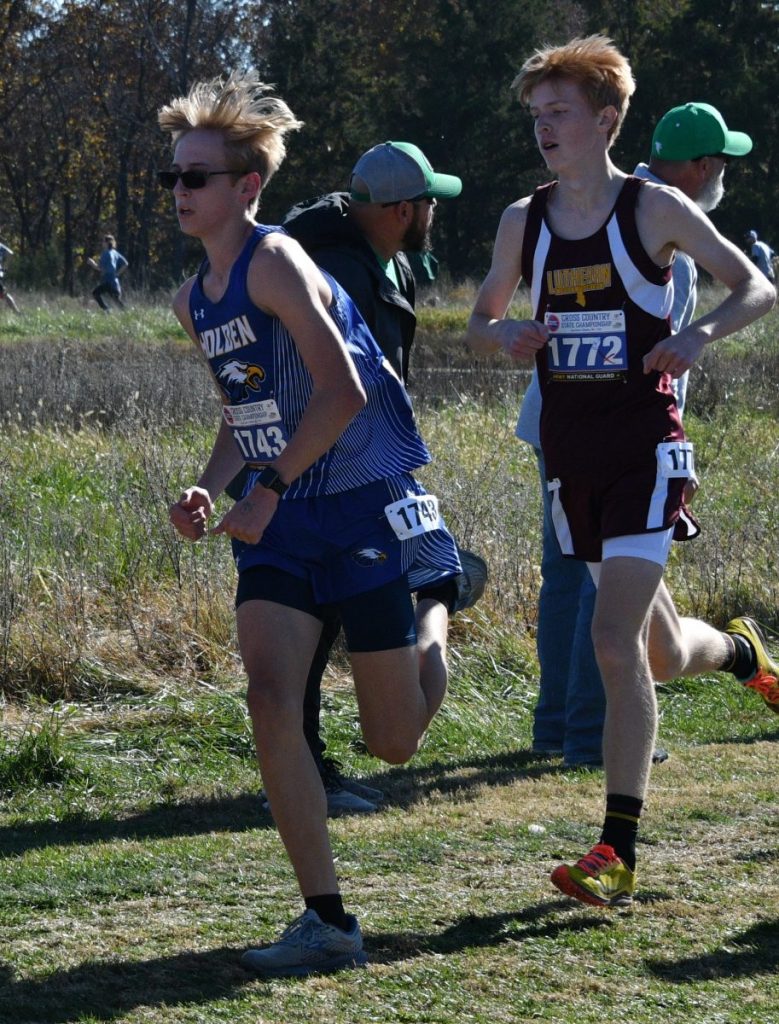 “All three of them are the first runners from Holden to make it to state in Class 3,” said Holden cross country head coach Dale Wescott with Holden moving up from Class 2 this season. “All three are also academic all-conference which says a lot about them.”

Willis finished the state meet with a 56th-place finish in a season-best time of 17:49. “Zach kept doing what he’s done all year,” said coach Wescott. “Zach clearly has become the number-one runner on the team. He was a good runner last year, and he turned into a true number-one this year.”

Willis worked through a tough starting position in the crowd of 170 runners as he jockeyed for position from start to finish. “We started out in a box kind of at the end,” described Willis. “We wanted to get out quickly, get at an angle, but it was kind of tough to do that. “Both me and Rett kind of got stuck at the beginning of the race, but as it spread out, it became easier to find our way.”

Willis compared the state meet experience to the Holden team’s early-season opportunity to run on the Gans Creek Course at an invitational meet in September. “When we ran here earlier, everything was more calm,” said Willis. “It wasn’t as big of a deal. Here it just seems like such a bigger stage. It was pretty cool.” Hankins worked through the state meet group of runners to place 127th with a season-best time of 18:47. “You look at what Rett has done, and he has been a real asset to the team,” said coach Wescott of the freshman who also is a member of the Holden football team. “He has a real high ceiling. “As usual, both those guys went out fast,” said coach Wescott. “The first mile was pretty good,” described Hankins after the race. “The second mile, I felt like I was going slow. Then, the third mile I was just pushing myself.”

Willis led the Holden boys team the entire season with team-high finishes all year. The boys squad just missed qualifying as a team for the state meet by finishing fifth at the district meet. “I really wanted to lead the team to state as a whole team,” said Willis after the state meet. “We couldn’t do that, but I’m really proud of the work that we put in, me, Rett, the rest of the team, as well. And obviously, Ava to get here. We’re really looking forward to next year.”

Lone Lady Eagles runner Ava Young ran to a 131st-place finish in a time of 23:30 to close out her freshman season. “What a great year for her,” said coach Wescott. “She had a tough year running by herself.” As the only runner to represent the Lady Eagles cross country program this year, Young fed off of the camaraderie, and friendships made with fellow runners.

Young described her approach to the race while waiting for the starting gun in the pre-race moments. “Very nervous in my head,” said Young. “But once you get in your box, and you talk to the people around you, then it’s fine, like I’m good…I’m chill.”

The freshman Lady Eagle pushed for a PR time, just missing it by seconds at the state meet. “My plan was to get out fast for the first 1k, because then it’s easier to pick people off,” said the lone Lady Eagle. “The first mile is always my worst because I’m like, I can feel everything, if that makes sense. “My second mile I’m in the zone, so I’m like mentally blank. That’s a lot better because you get to your second mile, and you’re just there, you’re just running,” described Young. “So that’s how it was today. Then, my third mile is always so close to the finish that I’m not worried about my third-mile time. I’m just worried about not losing.”

The freshman described her final mile of the season on the Gans Creek Course. “It went pretty good, I think,” said Young. “It was more about just setting a PR than moving up, so it’s a lot different than other races. I was about seven seconds off.”

Coach Wescott summed up the state meet. “Since none of them have been there, it’s really a learning experience.

It will really be an asset for the team next year.” Young, Hankins, and Willis all now look to next season with similar goals after this year’s learning experience at the state meet. Young simply hopes, “To not let the girls beat me. To be the first one.” Hankins hopes in his sophomore season he will, “Keep setting PRs.”

Willis is ready to put the work in for his senior season. “Next year, I definitely want to get all-state. I know what I have to do now. I know how big the stage is, and the work I need to put in to get there.”