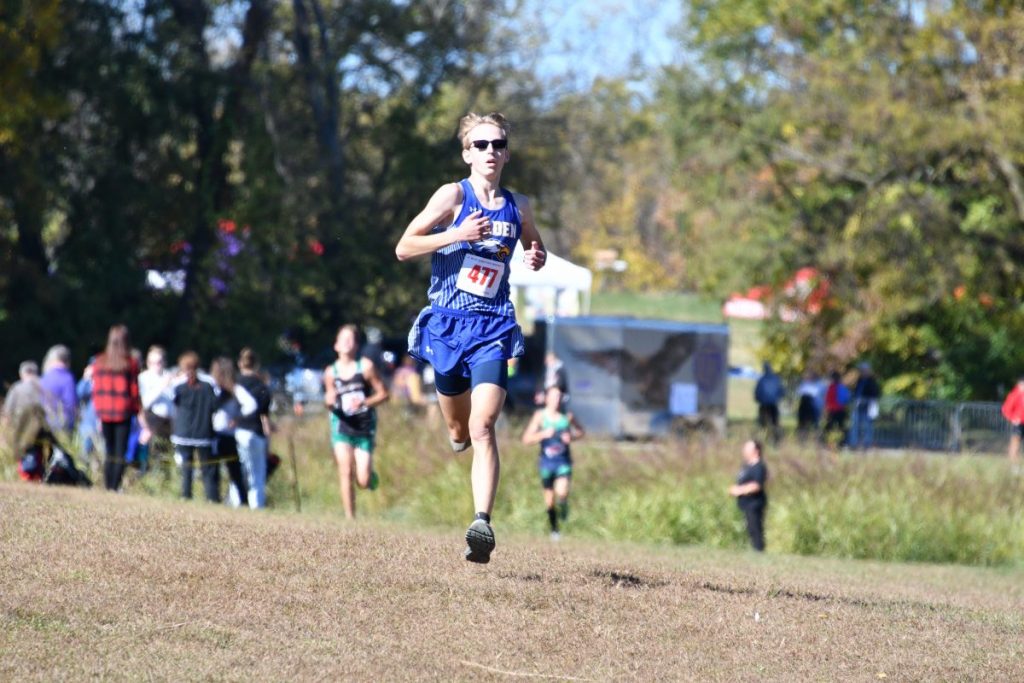 Young took a top-30 finish in the girls race to qualify for the state meet in her freshman season.

“I thought we got off to our best start of the year,” said Holden cross country head coach Dale Wescott of the runners’ pace down the first hill on the MWSU course. “This was a different course. It was hilly with a lot of curves.”

Willis, Hankins, and Young used the fast start on the challenging course to catapult all three runners to the first state meet appearances of their careers as Holden moved up to compete as a Class 3 team this season.

Coach Wescott highlighted, “These are the first three people in school history to get out of a Class 3 district meet.”

Willis built off of the MRVC-East individual title he ran to on October 20 as he grabbed a top-10 finish at the district meet. The junior placed ninth with a time of 18:35 in the field of 113 finishers with runners from 21 total schools competing in the boys race at the district meet.
“Zach has been Mr. Consistency all year,” said coach Wescott of the boys team’s number-one runner.

Hankins earned his spot at the state meet with a 20th-place showing at the district meet. Hankins timed out at 19:16.

“What a great first year,” said coach Wescott of Hankins who backed up an all-conference finish by grabbing an all-district medal. “He just attacked the course. He finished higher than we expected.”

With the district meets being reduced to four total districts, and the total teams in each district increasing this season, Young worked her way through the larger than normal crowd of runners to place 27th. The freshman timed out at 23:49 in her all-district performance in the field of 79 finishers.

“She really went out fast,” noted coach Wescott. “She really started quickly. I’m really glad to see her get out of a Class 3 district. State’s going to be a nice finish to the season for her.”

Running in their final district meet, seniors Michael Rinella and Brian Johnson placed 40th, and 53rd, respectively. Rinella timed out at 20:11. Johnson turned in a time of 20:38.

As the boys team held hopes of a top-four team finish entering the race, freshman Ethan Rice finished individually in 42nd-place, just ahead of Knob Noster runners Micah Rivera and Carson Zimmerschied. The Knob Noster team would edge the Holden boys team by nine points in the race with the Panthers totaling 141 team points, and Holden posting 150 points.

Rice ran the district course in a time of 20:17 as he edged out the two Panthers runners.

“Ethan was phenomenal in that race,” said coach Wescott. “He went over our expectations.

“They all ran good for their first district race,” added coach Wescott of the freshmen performances.

Sophomore Lukas Hunt turned in a 72nd-place finish in a time of 21:30 at the district meet.

Freshman Jackson Treece rounded out the boys team’s showing with a 78th-place finish in a time of 21:49.