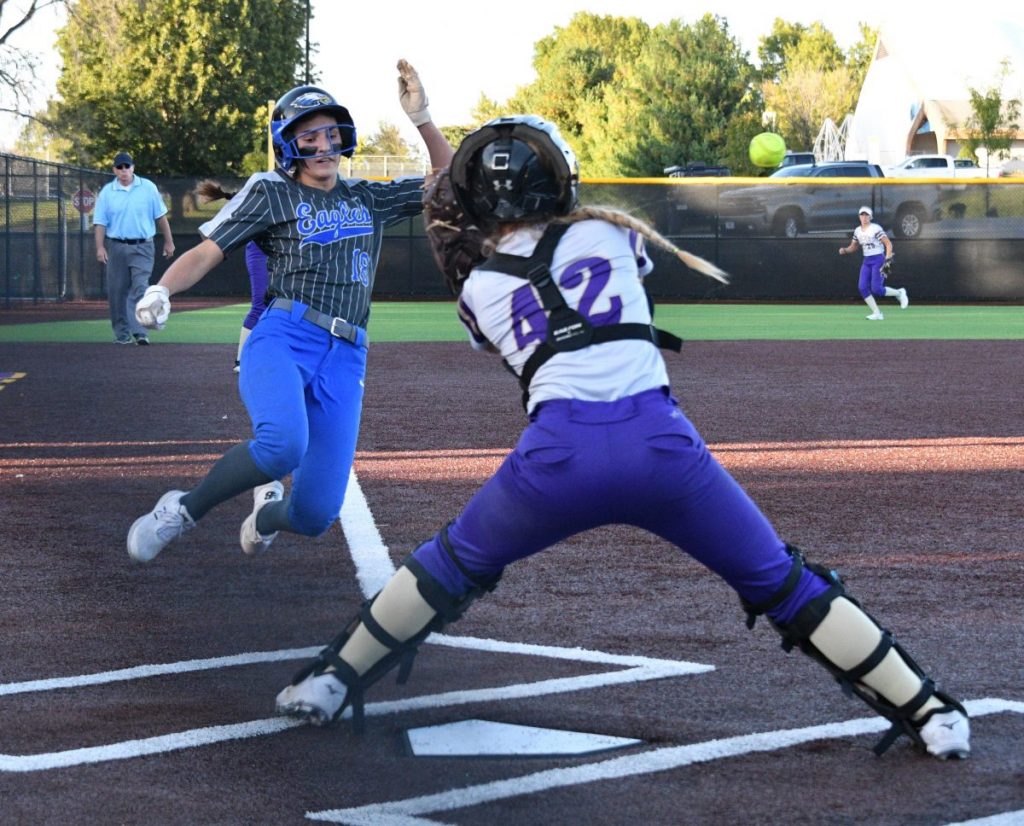 Soaring Into The State Playoffs… Lady Eagles center fielder Marah Klover (left) takes flight as she slides in for the winning run against Pleasant Hill in the Class 3, District 7 Tournament championship game. Chicks catcher Shaley Swaney awaits the arrival of the ball at the plate. Holden third baseman Liz Stout provided the hit that plated Klover for a 3-2 Lady Eagles win in the bottom of the eighth inning. Photo by Steve Edwards

On their path to the district crown, the Lady Eagles defeated Odessa in the semifinal round, and Clinton in the first round as tournament host school Odessa never actually held a game on its own field due to weather issues, and field conditions.

Playing on the all-weather turf field at Blue Springs High School on Thursday, October 14, the Lady Eagles softball team won the Class 3, District 7 Tournament championship game over Pleasant Hill with a 3-2 final score in an extra inning of play.

Senior third baseman Liz Stout provided the heroics by driving in junior center fielder Marah Klover in the bottom of the eighth inning for the winning run.

“We knew that this would be a low-scoring game,” said Holden softball head coach Jeff Smith. “As the game played out, it was obvious that it was going to be a dog fight, and come down to the very end.

“I was incredibly proud of the attitude, and effort the girls put into this game. They were down twice, and rallied back to get the win.”
Pleasant Hill took an early 1-0 lead in the top of the first inning when catcher Shaley Swaney scored on a single hit by Katie Meiries.

The Lady Eagles tied the contest at 1-1 on a ground out by shortstop Kimmie Spring that pushed first baseman Abby Sisk across the plate.

“Kimmie struggled at the plate in the championship game, but as always, her defense shined through,” said coach Smith. “She came up with some big plays at short, and was our motivator late in the game when we really needed it.”

In a bang-bang play that resulted in one run for Pleasant Hill in the top of the fourth inning, Stout tagged out Chicks baserunner Mack Montgomery trying to stretch a double into a triple for the third out of the inning. Kenna Woods scored on the play to give the Chicks the lead back at 2-1.

Sechrest and the Lady Eagles defense held Pleasant Hill scoreless in the top of the sixth inning before Holden tied the game in the bottom of the sixth.
Klover led off Holden’s side of the sixth with a bunt. Stout singled to plate Klover, and to tie the game.

“Marah came up clutch in the sixth, dropping down a bunt single on her own to reach,” said coach Smith. “Liz set back on a change-up, and drilled it over the center fielder to score Marah.”

Both teams stranded a runner for a scoreless seventh inning. With the game knotted at 2-2 at the end of regulation play, the teams headed into the eighth inning.

Shifflett singled for the Chicks in the top of the eighth, and would reach second base before being stranded.

The top of the Lady Eagles lineup awaited Shifflett when she took to the mound in the bottom of the eighth.

Leadoff hitter Klover singled to start the inning off for Holden, then stole second base with Spring at bat.

Following a strikeout by Spring, catcher Camille Davidson drew a walk to put runners at first and second.

With Stout at the plate, Klover advanced to third base on a passed ball, and Davidson moved to second base.

After two foul balls on a 2-2 count, Stout hit a ground ball to Mack Montgomery at shortstop with Klover running on the hit.

Klover slid in safely under Chicks catcher Swaney for the winning run as Montgomery’s throw to home plate glanced off of Swaney’s mitt.

“When the top of the lineup came back around in the eighth, and Marah led us off with a single, we were in good shape,” said coach Smith. “After a passed ball, and runners at second and third, all we needed was a ball in play, and preferably on the ground.

“Nobody wanted to get to that pitcher more than Liz,” noted coach Smith.

Stout ended the game with 2 RBIs, and 1 hit.

“Maddie has had many great games on the mound, but that was the best game that I have ever seen her throw,” said coach Smith. “I’m proud of the way that she stayed composed under pressure.

“Camille was absolutely solid behind the plate,” continued coach Smith. “She called every pitch, and let nothing by her.”

Semifinal Versus Odessa
The Lady Eagles traveled to the all-weather turf field of Blue Springs South High School where they worked to a 10-6 semifinal win over Odessa.
The game was marked by a four-hit day from Lady Eagles right fielder Faith Brown. Brown highlighted the first inning with a two-run home run that scored Liz Stout ahead of her for an early 3-1 Holden lead.

“Today, we came out swinging very well from the very beginning,” said coach Smith. “I think we put pressure on them all but one inning. We had runners in scoring position nonstop, and got some big at-bats from Faith.

“She had an absolute shot that helped us out. She’s on fire right now.”

Center fielder Marah Klover scored Holden’s first run of the game after drawing a walk. Klover scored on an errant throw during a sacrifice bunt attempt from Kimmie Spring.

Following a run from the Lady Bulldogs in the top of the third inning, Holden plated five runs in the bottom of the frame to take an 8-2 lead.
Kameryn Rehfeldt scored Camille Davidson and Stout on a double in the five-run third inning.

“All around, I think everybody contributed offensively,” said coach Smith. “And then if they didn’t contribute offensively, it seemed like they made up for it in the field.”

In the fifth inning, Lady Eagles second baseman Peyton Kilgore was lost to an injury, and was replaced by junior Tasia Lee.
“Losing Peyton’s going to be tough,” said coach Smith.

The Lady Bulldogs would put up four runs in the top of the fifth inning.

Lee reached base on a bunt in the bottom of the fifth inning, though the Lady Eagles failed to plate a run in the frame as Lee, courtesy runner Abby Wamsley, and Klover were left stranded.

“She did a great job,” said coach Smith of Lee. “She was on base one time, and put another one in pretty good location in the outfield, just happened to get caught. I put her at second base knowing that no matter what happened, she would have a great attitude, and give 100 percent effort, which she did.”

Brown plated Stout on a single in the bottom of the sixth inning. Brown would score Holden’s final run of the game on a ground ball from Sisk.
“We got a couple runs there in the last inning that sealed the deal for us,” noted coach Smith.

Quarterfinal Versus Clinton
Holden’s district first-round game against Clinton scheduled for Monday, October 11 was moved from Odessa to Holden, and pushed back to Tuesday due to field conditions after a heavy rainfall.

Starting pitcher Abby Sisk delivered a win on the mound, and hit a three-run home run in Holden’s 5-1 win over the Lady Cardinals.
Centerfielder Marah Klover added a two-run home run in the fifth inning to put Holden ahead 5-0.

Clinton scored its lone run in the top of the sixth inning.

“I think it was kind of one of those first entry level games at districts, and we got some of the nerves out which is a good thing,” said coach Smith.
Sisk’s home run in the second inning scored Kameryn Rehfeldt and Peyton Kilgore.

“She pitched really well on the mound, and came up big,” said coach Smith in regard to Sisk. “She’d kind of been struggling most of the season, and she’s just really started getting confidence at the plate.”

At the plate, Kimmie Spring and Faith Brown each had 1 double to go with Sisk and Klover’s home runs.

Holden held an overall record of 20-7 after its three wins in the district tournament.

Playing in a home game in the state quarterfinals against Chillicothe, the Lady Eagles fell by the final score of 11-0 on Wednesday, October 20. Look for the complete state quarterfinal game article in next week’s edition of The Holden Image.