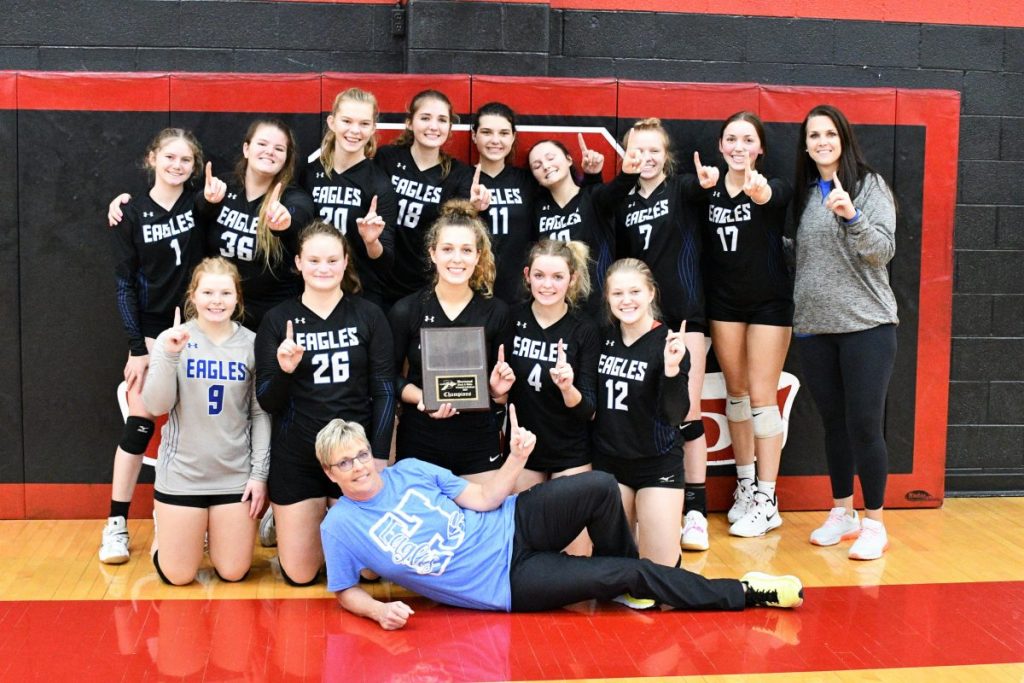 The Holden volleyball team captured the first-place trophy at the Sherwood Volleyball Tournament by sweeping through pool play with three wins, and winning two championship bracket matches on Saturday, October 9.
“I’m super proud of the girls for playing really well all day long,” said Holden volleyball coach Julie Carver. “They played together as a team, and were really consistent all day. We only dropped one game all day. Going 10-1 was very good.
“I am super excited that we brought home the first-place trophy.”
In their semifinal match-up with Knob Noster, the Lady Eagles took a 2-0 win over the Lady Panthers.
The Lady Eagles secured the tournament first-place trophy by defeating the Drexel Lady Bobcats two sets to one in the first-place match.
“J’Lee (Jones) and Gracie (Carver) had good, solid days at the net,” highlighted coach Carver. “They lad us in blocking and hitting efficiency.
“Kalie (Slack) has really stepped up, and is serving really well and leading us in the back row.”
Slack chipped in 6 total aces in the tournament. Alex West added 4 aces. Slack contributed 38 digs.
“Emma (Lohe) led us with 33 kills, and played good all-around volleyball,” noted coach Carver.
Lohe and Carver finished the tournament with 5 block apiece.
The Lady Eagles setters also drew praise from the head coach. “Brady (Hinton) and Tristyn (Powell) are going a great job distributing the ball, adn controlling our offense, along with picking apart the other teams’ defense with dumps.”
On the day, Powell totaled 43 assists. Hinton set for 33 assists. Hinton also recorded 32 digs.
Senior Laila Seiz served for a team-high 8 aces.
“Laila led us at the service line with eight aces, and did not miss a serve all day,” stated coach Carver.
Jaci Gower matched Seiz in total aces with 8.
“Jaci has been contributing all the way around, serving well, stepping up on defense, and been a factor at the net,” pinpointed coach Carver.
Lohe and Gower each posted a team-high 51 digs in Holden’s five matches on the day.
“It was a good, solid day from all of the kids, and I’m very proud of their efforts and victory.”
After their Sherwood Tournament championship performance, the Lady Eagles held an overall record of 16-4-2, and an MRVC-East mark of 7-0.
This Thursday, October 14, the Lady Eagles close out both the regular season, and the conference season with a home match against MRVC-East opponent Higginsville. The JV match starts at 5 p.m. The varsity match starts at approximately 6 p.m.
Posted in Sports