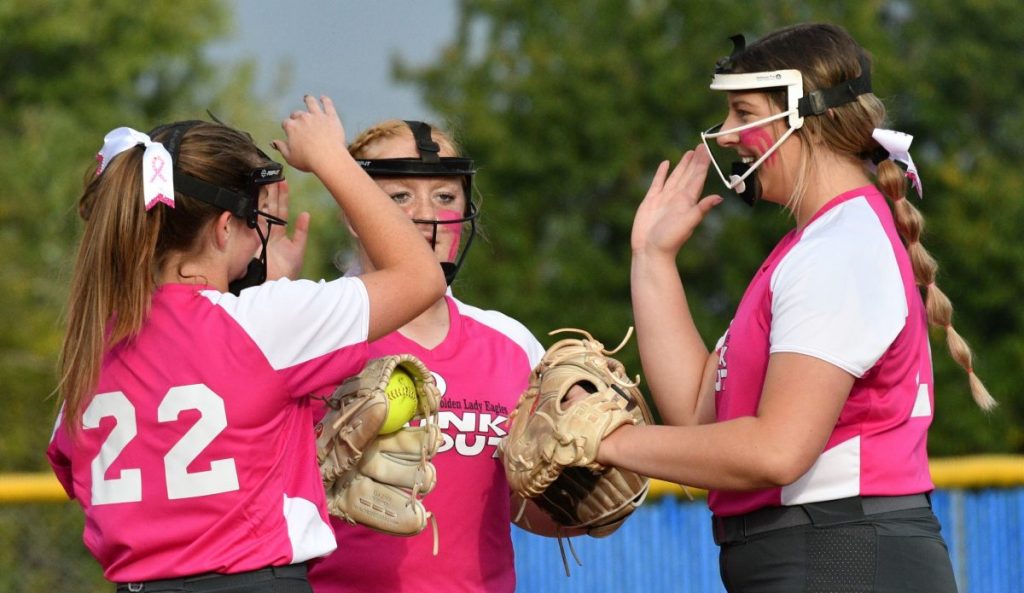 Meeting At The Mound… Lady Eagles junior pitcher Maddie Sechrest (22), and seniors Peyton Kilgore (center) and Kayla Rokusek break from a huddle on the pitcher’s mound during Holden’s Senior Night softball game against Richmond. Sechrest pitched a shutout in the Lady Eagles 1-0 victory. Rokusek returned from an injury as she, Kilgore, Abby Wamsley, Jocelyn McHenry, Sarah Dunbar, and Liz Stout played in the final regular season home softball game of their careers. Photo by Steve Edwards

The Lady Eagles softball team served up a 1-0 win over Richmond in Holden’s Senior Night game last Tuesday, October 5 as the Lady Eagles also featured the contest as their Pink Out Game.

Senior left fielder Abby Wamsley scored the deciding run in the game on a hit by junior Kimmie Spring.

Last Tuesday’s win gave Holden a season sweep over the Lady Spartans as the Lady Eagles defeated Richmond by the score of 15-0 in their first meeting on September 16.

“We knew it would be closer,” said Holden softball head coach Jeff Smith. “They ended up missing a couple girls last time we played them.

“We had a rough first time through the lineup, and we didn’t make many adjustments the rest of the way through it.”

Wamsley’s path to the plate to score the lone run of the game began with two outs in the bottom of the third inning.

Wamsley reached base on a slap-hit single, then stole second base to set the table for Spring.

Spring singled to plate Wamsley from second base.

“He’s kind of cautious about that a little bit, but I was going to go. I felt like I was going to go, but yeah, I had to book it,” described Wamsley.
“Coach Smith knows her speed, and he sent her,” chimed in senior second baseman Peyton Kilgore.

The Lady Eagles would record four hits in the game versus Richmond’s two hits.

Wamsley had two of Holden’s hits.

“Luckily, Abby Wamsley got on base a couple times for us, and one paid off,” said coach Smith. “Her speed really paid off on that one, and got us the one run that we needed.”

Spring finished the game with the game-winning RBI on one hit.

Starting pitcher Maddie Sechrest had 1 hit. In collecting the shutout win on the mound, the junior Sechrest racked up 11 strikeouts while walking one batter, and holding Richmond to two hits.

“Maddie pitched a heck of a game, as usual, and kept us in the ballgame even when we weren’t hitting,” said coach Smith. “The defense behind her made some good plays, also.”

Stout, who leads the team in home runs this season, and has played solid defense at third base reflected on the opportunity to play one last regular season game on Field 2 at Stub Memorial Sports Complex.

“It was just good to play with all my friends, and just getting the feel of like playing one last time on this field,” said Stout.

For Rokusek, the game represented not just the final regular season home game of the seniors’ careers, but it marked the first time she had the opportunity to take to the field this season after recovering from an injury suffered early in the basketball season during her junior year.

“It was hard kind of just being on the sidelines my whole season, but I was going to play at least one game with them so it meant a lot,” said an emotional Rokusek.

“They all got to start, and got to play the majority of the game,” noted coach Smith. “That was good for them, and they got the win on Senior Night.

“I’m really proud of the girls, and thankful for all the hard work they’ve put in over the past four years to contibrute to the team.”