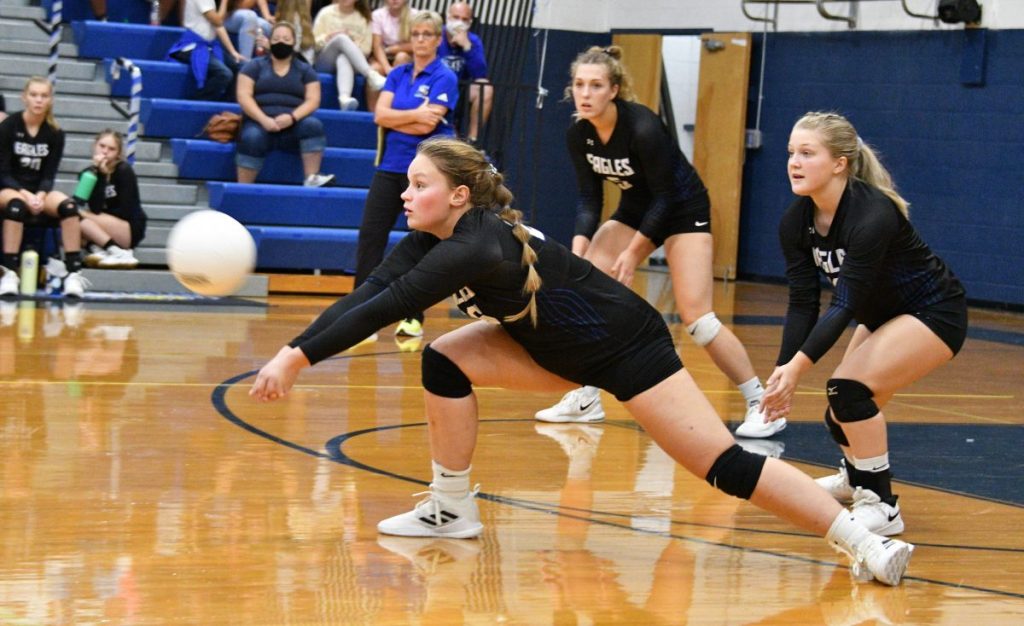 “Senior Night was awesome,” said Holden volleyball coach Julie Carver. “We had a great group of seniors to celebrate tonight.
“They have had a great career at Holden. They have been conference champs the last two years. We have a ways to go, but that is one of our goals again.

“They really are a great group of kids with bright futures that I have had the honor to coach,” said coach Carver.

“They took care of business on the court, and totally controlled the match,” said coach Carver of the Lady Eagles’ romp to victory. “Kalie Slack is really stepping up at the service line.

“Elaina Young stepped in, and played a nice match. Alex West came in, and provided us some spark at the net.

“Emma was excellent attacking, mixing up placing the ball, putting the ball down with kills,” described coach Carver of the team effort.

Lohe led the team with 12 kills, had a perfect 3.00 serve receive rating, posted 7 digs, set for 6 assists, and served for 2 aces.

Slack recorded 6 digs, served for 4 aces, and chipped in 1 kill.

Lady Eagles Capture Volleyball Conference Road Win
The Holden volleyball team returned from its road match at Higginsville with a 3-0 MRVC-East win over the Lady Huskers on Tuesday, September 28.

A first set win by Holden was hard earned in an extra-point game that was settled in a 29-27 win by the Lady Eagles.

In the second set, the Lady Eagles dismantled the Lady Huskers during a double digit points streak midway throught the set on the way to a 25-11 Holden win.

In a back-and-forth third set, Holden emerged with a 25-18 advantage to clinch the match.
“Great win tonight,” said Holden volleyball head coach Julie Carver. “Serving struggled in the first game, but overall it was very good. It was much better in the last two games.

“I thought our attacking was also pretty good. The girls were pretty focused, and showed some really good leadership tonight,” noted coach Carver.
Senior Emma Lohe led the team with 14 kills, and 12 digs. Lohe served for 3 aces, and had 2 blocks.

Senior Brady Hinton put up a team-high 15 assists, had 8 digs, and provided 2 kills.

“I thought Brady stepped up as a vocal leader in our huddle, and that was great to see,” said coach Carver. “Kalie Slack had a great service run in the second game that really captured the momentum for the rest of the night.

“Emma is starting to be much smarter with the ball which is making her much harder to defend,” added coach Carver.
Slack finished with 2 aces, and 9 digs.

With the win, the Lady Eagles improved their conference record to 4-0, and their overall record to 6-3 at the time. Higginsville stood at 5-9-3 after taking the loss that evened their conference mark at 2-2. The Lady Husker would defeat Knob Noster on Thursday to go to 3-2 in league play.

“They are a solid team,” said coach Carver of Higginsville. “We came out and played well to win in three. Great solid team effort. That is what we need, everyone to do their job, and contribute.”