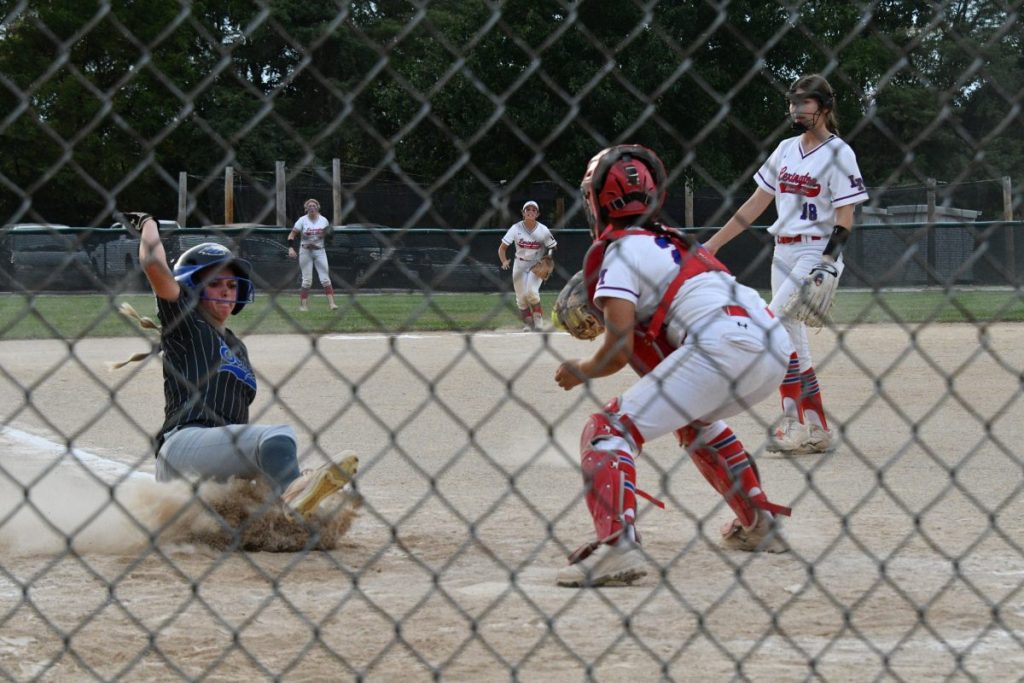 Sherwood took the lead in the contest by plating a run in the second inning before an RBI single from Lady Eagles catcher Camille Davidson that scored Marah Klover tied the game in the top of the fifth.

“This was a big win for us, and a big confidence booster,” said Holden softball head coach Jeff Smith. “We have not been able to get past them for many years, and they have another very strong pitcher.

“We were able to make adjustments at the plate, and finally got to her at the end of the game.

“We had chances to score in multiple innings, but finally pulled away with a three-run home run by Faith Brown who has been on fire lately,” said coach Smith.

Brown’s third home run of the season, and Holden’s 10th hit of the game plated Kimmie Spring and Davidson for a three-run lead that stood for the win.

In a complete game performance, Lady Eagles starting pitcher Maddie Sechrest held the Lady Marksmen to five hits, and a lone run as she silence seven Sherwood batters with strikeouts.

“Maddie Sechrest pitched an amazing game for us, and our defense was solid most of the game,” said coach Smith.

Davidson, Brown, and Peyton Kilgore each finished with 2 hits apiece. Klover, Spring, Sechrest, and Liz Stout each had 1 hit.

Lady Eagles Defeat Leeton
The Lady Eagles softball team captured an 11-1 win in five innings on the road at Leeton on Tuesday, September 28.

Senior third baseman Liz Stout provided three runs on a home run in the first inning as part of nine runs scored by the Lady Eagles in the opening frame.

Stout added a two-run home run in the fourth inning for a 10-run lead to set up the run-rule shortened finish as the Lady Bulldogs plated a lone run in the third.

“Leeton has competed with a bunch of larger schools, but we put up nine in the first and really killed their confidence,” said Holden softball head coach Jeff Smith. “We somewhat failed to finish, only putting up two more runs in the next four innings, but it was definitely a big night for Liz and Kimmie both at the plate.”

Kimmie Spring drove in Holden’s first run of the game with an RBI single that scored leadoff batter Marah Klover who had drawn a walk.
Spring finished the game with four total hits, and one RBI.

Sisk recorded 3 strikeouts in the win on the mound while allowing 1 run on 4 hits, and 1 walk.

At the plate for Holden, Camille Davidson, Faith Brown, and Peyton Kilgore each had 2 hits. Davidson totaled 2 RBIs. Kameryn Rehfeldt had 1 hit.

The Holden softball team played the role of spoiler in Lexington’s Senior Night game in a 15-2 conference road win for the Lady Eagles on Wednesday, September 29.

Second-year Lady Eagles coach Jeff Smith saw his current team put up one run in the first inning, six runs in the second inning, five runs in the third, and three in the fourth against the team he formerly coached.

The Minutewomen plated two runs in the second inning.

“In this game, we actually took some time to get adjusted to the slower pitching at the plate,” said coach Smith. “We made some quick adjustments, and completely overpowered them with our bats.”

As part of Holden’s power displayed on the night, Marah Klover, Kameryn Rehfeldt, Kimmie Spring, and Liz Stout each had a double in the game. Rehfeldt also hit a triple.

Spring, Rehfeldt, and Camille Davison each totaled three hits in the game.

Also for Holden, Faith Brown had 2 hits, and 2 RBIs. Stout and Jocelyn McHenry each had 1 hit, and 1 RBI. Klover and Abby Wamsley each finished the game with 2 hits.

“It was great getting back to Lexington to see their four seniors who I coached for two years,” said coach Smith. “It’s a great group of student athletes, and it was good to see what their future ambitions were.

“Our Senior Night on October 5 is going to be an emotional one with losing six seniors that really mean a lot to the program, and the school. They will be hard to replace.”

The Lady Eagles hosted Richmond for Holden’s Senior Night game on Tuesday of this week. Game results were not available at press time.

The Lady Eagles softball team closed out last week by defeating the Lady Huskers in a final score of 14-0 on Saturday, October 2.
For Holden, Camilled Davidson led the team with 4 hits, and 4 RBIs.

After Holden’s win over Higginsville, the Lady Eagles softball team held an overall record of 15-6, and stood at 7-1 in MRVC-East play.

The next game scheduled for the Lady Eagles softball game is this Thursday, October 7 as Holden closes out the MRVC-East season on the road at Carrollton. The varsity game on Thursday begins at 5 p.m. The JV game follows with an approximate start time of 6:30.

MRVC-East Softball Note: The Holden softball team’s game at Carrollton on Thursday, October 7 will determine the MRVC-East Softball Season Championship with both the Lady Eagles and the Lady Trojans entering the game with identical records of 8-1 in MRVC-East play.