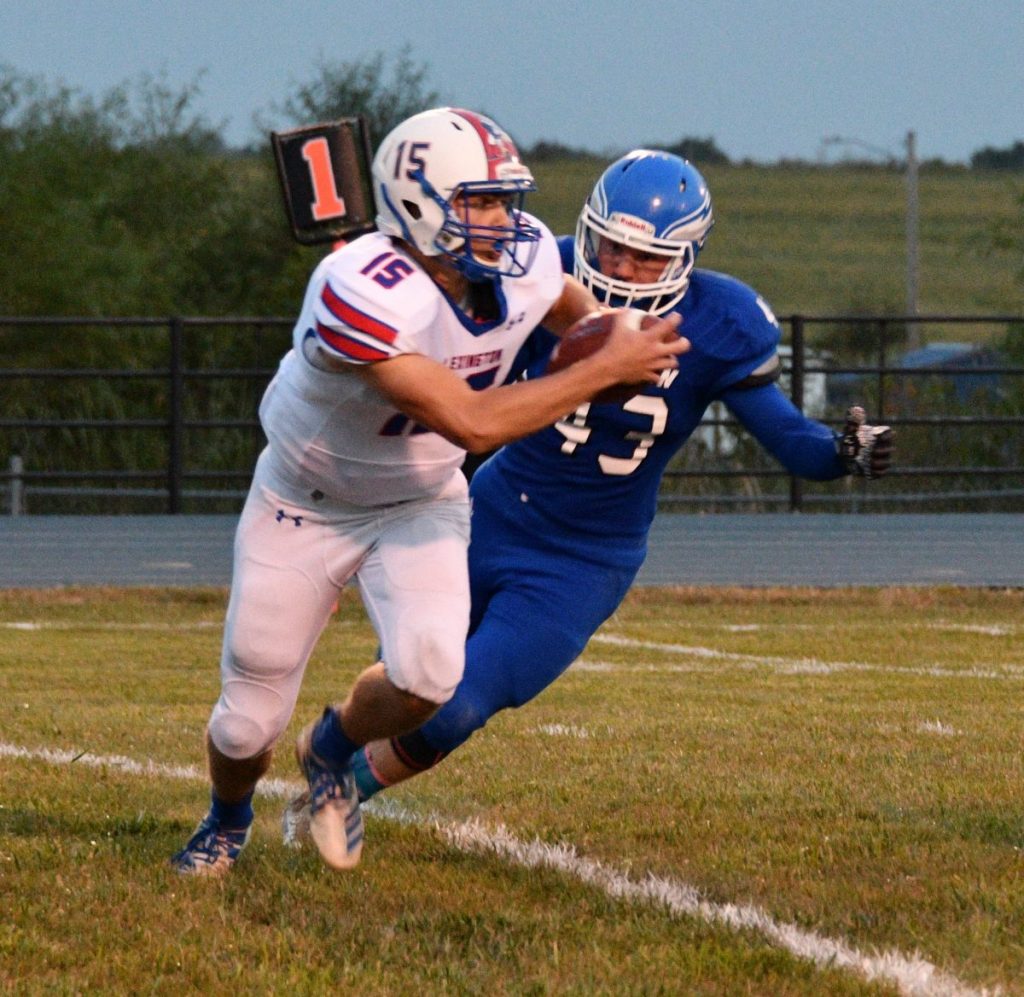 Nowhere To Run… Eagles defensive end Americo Mabrey (43) chases down Lexington quarterback Caden Hamilton for a sack during the first quarter in Holden’s Homecoming game against the Minutemen on Friday, September 24. A strong defensive effort from Holden led to a conference-opening win as the Eagles emerged with a 22-8 Homecoming victory. Photo by Steve Edwards

The Holden football team secured both a Homecoming victory, and an MRVC-East opening win by defeating Lexington by the the final score of 22-8 last Friday, September 24.
Quarterback Aiden Morarity found receiver Garrett Smith for the Eagles first touchdown of the game.
The Eagles’ defense provided points on a blocked punt recovered in the end zone by freshmen lineman Aiden Christian to allow Holden to take a 14-0 lead in the first quarter.
“Defense won it for us,” said Holdend football head coach David Diener. “There’s absolutely zero doubt about that.
“They ran things offensively that they had showed very little of, and our defense made really good adjustments getting to their spread,” noted coach Diener who emphasized that the Eagles had prepped to stop Minuteman running back Evan Gosnell in the number-six jersey.
“We were ready to stop six, and we were able to contain him pretty well at tailback,” said coach Diener.
Gosnell would finish with a team-high 81 yards for Lexington on 14 carries.
A 26-yard touchdown pass from Morarity to Smith on Holden’s first drive of the game put the Eagles on the scoreboard for a 6-0 lead after a failed two-point conversion.
“Offensively, we scripted out exactly what we wanted to, and we hit our opening drive,” recalled coach Diener. “Every play we ran we knew we were going to do, and we executed all of them…marched it right down the field.”
Eagles defensive end Americo Mabrey introduced Minuteman quarterback Caden Hamilton to the grass turf on a sack on Lexington’s first play of the game.
“Americo is so quick,” said coach Diener. “He’s a strong kid. He’s a little undersized, but we try to use that to our advantage, get him on the move, and try to give D linemen fits. He makes plays.”
Mabrey’s sack, and two incomplete passes from Hamilton left the Minutemen punting with their backs against their own end zone.
Mabrey blocked the Lexington punt. Freshman defensive lineman Aiden Christian jumped on the ball in the end zone for a touchdown. Reco Jenkins carried the ball on the successful two-point conversion.
“We knew we could block that punt,” said coach Diener. “We executed it, and we got it. That was our big special teams win.”
Eagles defensive back Josh Taylor came up with Holden’s next impactful defensive play by intercepting a Hamilton pass with Lexington marching in Eagles’ territory.
On first-and-goal from the nine-yard line, Taylor snatched Hamilton’s pass in the end zone, and made a short return.
“He stepped up,” said coach Diener of Taylor. “He read his keys, and he was downhill quick. He was right where he needed to be.”
Following an Eagles lost fumble in the second quarter, defensive back James Richard returned the ball back to Holden on an interception.
“Our defense answered the call every single time,” emphasized coach Diener. “Defense won the second quarter by far, and that could have easily gotten away from us really quickly. They stepped up, got turnovers of their own, and fourth down stops…we’re able to keep them out of the end zone for us to still have it 14-0 at half.”
Hamilton put Lexington in the end zone for the lone score for the Minutemen on the night with a 37-yard touchdown run in the third quarter. Gosnell ran for the two-point conversion to put the score at 14-8.
Following a good return by Matthew Reynolds on Holden’s kickoff return, the Eagles put together a scoring drive that was completed when Holden receiver Jarrin Brown entered the end zone on a 15-yard reception.
Morarity connected with Smith on a pass for the two-point conversion to set the final score.
“Aiden Morarity, after they had scored, coming up, and hitting his big passes,” identified coach Diener of Holden’s keys to holding Lexington at bay.
“We knew we had these plays ready, and when his number was called, him, and Garrett and Jarrin, they hit. Those are the reasons we won, but defense was absolutely outstanding.
“And Reynolds on his kickoff return that set up the scoring drive, was absolutely outstanding, too. A kid we’re not anticipating getting the ball there…he picks up up, makes the guy miss, and picks up another 10 yards. Those are big, tough yards that we are needing because yards were hard to come by.”
The Eagles football team opens the MRVC-East season at 1-0 with the win over the Minutemen in a Homecoming victory as Holden’s overall record improves to 3-1.
“It really means more to the players, and the community than it does to me,” said coach Diener of the Eagles capturing their first conference win since a 42-21 league victory over Carrollton on October 18, 2019. “I’m new. I want to win every game that I possibly can, and I knew I had a chance to win this one.
“But to see the enjoyment of the kids, to see the enjoyment of this community, means absolutely more to them than it ever could to me, even though it’s a big first conference win for myself. Ultimately, it’s all about them, and I’m so happy that we got to do that for our community.”
For Holden, Morarity finished the game with 6 pass completions for 131 total yards, and 2 touchdowns.
Smith totaled 4 catches, 98 yards, 1 touchdown reception, and a 2-point conversion.
Brown had 2 catches, 33 total yards, and 1 touchdown reception.
Hunter Higgins led the Eagles in rushing with 35 yards on 9 carries.
Reco Jenkins carried the ball 13 times for 17 yards, and a 2-point conversion. Danny Hartzler totaled 13 yards on 8 attempts. CJ Reifsteck had 5 yards on 4 carries.
Christian led the team with 6.5 tackles, and scored a touchdown on the punt block recovery.
Mabrey and Tyler Hankins each totaled 5 tackles. Reifsteck and Hartzler each had 4 tackles. Smith had 3.5 tackles. Higgins, Kole Shumate, and Keegan Daniel each had 3 tackles. Taylor totaled 2 tackles, and 1 interception.
Jayden Davis-Hacker had 1 kickoff return for 25 yards. Reynolds had 1 kickoff return for 16 yards.
This Friday, the Holden football team plays at Higginsville at 7 p.m.
Posted in Sports