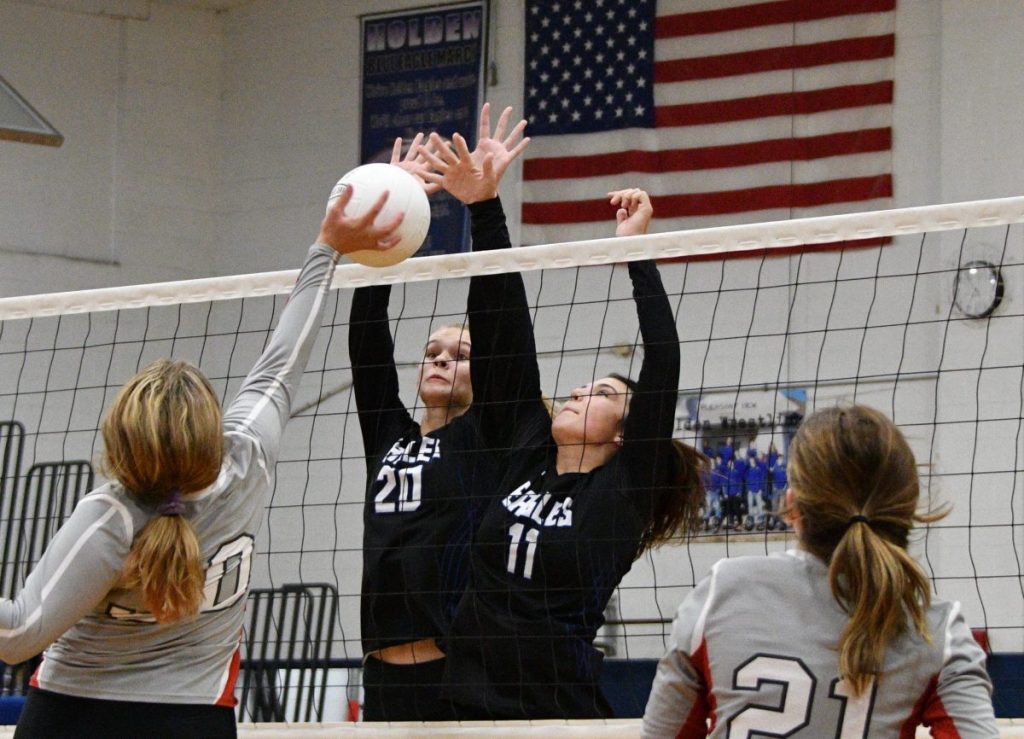 Newcomers At The Net… Lady Eagles freshmen Lilee Keller (20) and Jaci Gower (11) block at the net during Holden’s 3-0 conference-opening win over Carrollton on Thursday, September 16. Photo by Steve Edwards

The Holden volleyball team opened the MRVC-East season with a commanding victory by defeating the visiting Carrollton Lady Trojans by a 3-0 (25-13, 25-20, 25-6) score on Thursday, September 16.
With Holden’s full roster back in action for the second match in a row, and as the team worked to fine tune its rotation, the Lady Eagles’ efforts on Thursday kept the visiting team out of system most of the night.
“I thought we definitely controlled the match tonight, better than we have in a few recent matches,” said Holden volleyball head coach Julie Carver. “We served as good as we have served all year with 18 aces on the night led by Jaci, Emma, and Laila.”
Freshman Jaci Gower jump served her way to a team-high 8 aces. Senior Emma Lohe totaled 5 aces, and senior Laila Seiz delivered 4 aces. Senior Brady Hinton chipped in 1 ace.
“We also hit the ball very well which allowed us to control things, and not allow Carrollton to run their offense efficiently,” continued coach Carver.
In a balanced effort, Lohe totaled 7 kills on the night with Gower and Hinton each providing 6 kills. Seiz and junior J’Lee Jones each had 2 kills. Junior Gracie Carver contributed in 1 kill.
In her second game back on the season, junior Tristyn Powell had 8 assists, 4 kills, and 3 digs.
“We got Tristyn back this week which allows Brady to start swinging at the ball again, and Tristyn brings a competitive attitude to our court which is awesome,” highlighted coach Carver.
Hinton would lead the Lady Eagles with 13 assists versus Carrollton.
Lohe topped the team with 5 digs. Seiz, Gower, and Hinton would finish with 4 digs apeice. Kalie Slack contributed 3 digs.
“Overall, this was a good night for us,” said coach Carver who added, “I thought Alex (West) and Izzie (Guinn) had some really nice moments for the JV team.”
The Holden JV volleyball team defeated Carrollton 2-0 (25-8, 25-12).
Following Holden’s win over Carrollton, the Lady Eagles held an overall record of 3-3, and an MRVC-East mark of 1-0.
This Thursday, September 23, the Lady Eagles varsity team plays a conference match at Lexington at 5 p.m.
Next Tuesday, September 28, the Lady Eagles travel to Higginsville for a confernce match-up with a C match at 5 p.m., a JV match at 6, and a varsity match at 7.
Posted in Sports