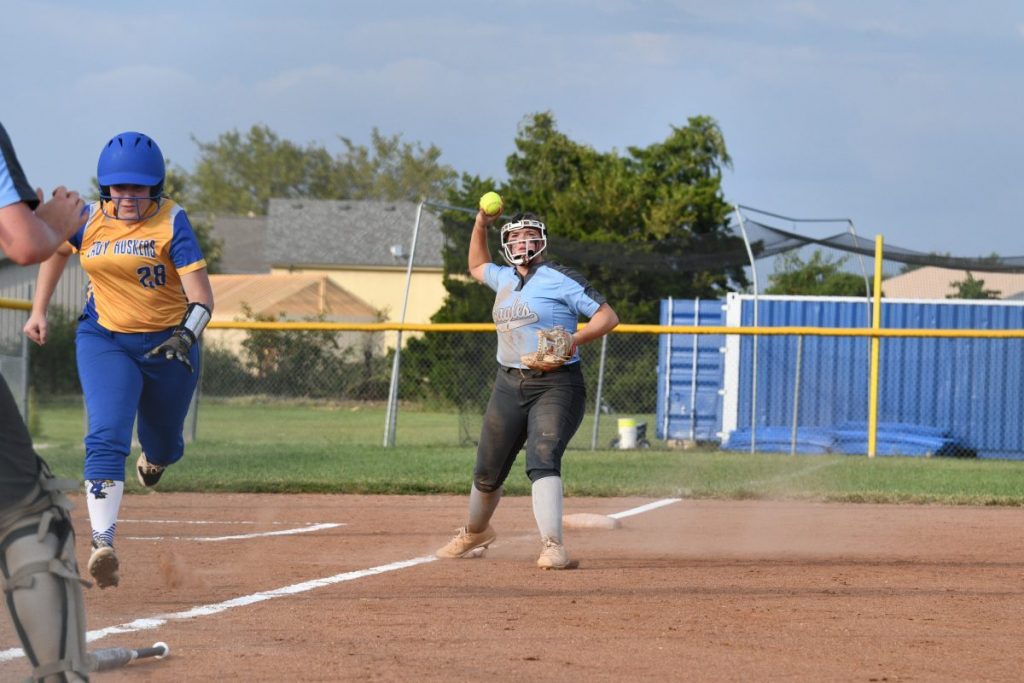 Solid Defense… Lady Eagles third baseman Liz Stout (right) fields a ground ball, and throws to home plate for an out with the bases loaded in the third inning of Holden’s home game against Higginsville on Tuesday, September 14. Stout handled the final two outs of the third inning for Holden, and had a hit and 2 RBIs as the Lady Eagles defeated Higginsville 12-2. Photo by Steve Edwards

The Holden softball team defeated the visiting Lady Huskers of Higginsville in a run-rule shortened conference contest by the final score of 12-2 on Tuesday, September 14.

The Lady Eagles plated runs in each of the five innings of the game.

“We capitalized on quite a few defensive mistakes and walks to put some runs up early,” noted Holden softball head coach Jeff Smith.

The Holden defense held when the Lady Huskers loaded the bases with one out in the third inning. Lady Eagles third baseman Liz Stout handled two ground balls for outs to silence Higginsville’s scoring threat.

“We started to hit better later in the game with a few infield singles from Camille (Davidson), and four big RBIs off of two hits from Kameryn Rehfeldt,” highlighted coach Smith. “Abby Sisk pitched really well in this game.”

For Holden, Rehfeldt led the Lady Eagles with 2 hits, and 4 RBIs.

Stout and Jocelyn McHenry each had 1 hit. Kimmie Spring and Peyton Kilgore each had 1 RBI.

For Holden, Sisk worked a complete game in the win for. Sisk allowed 2 runs (1 ER), five hits, and 1 walk while striking out 2 batters.