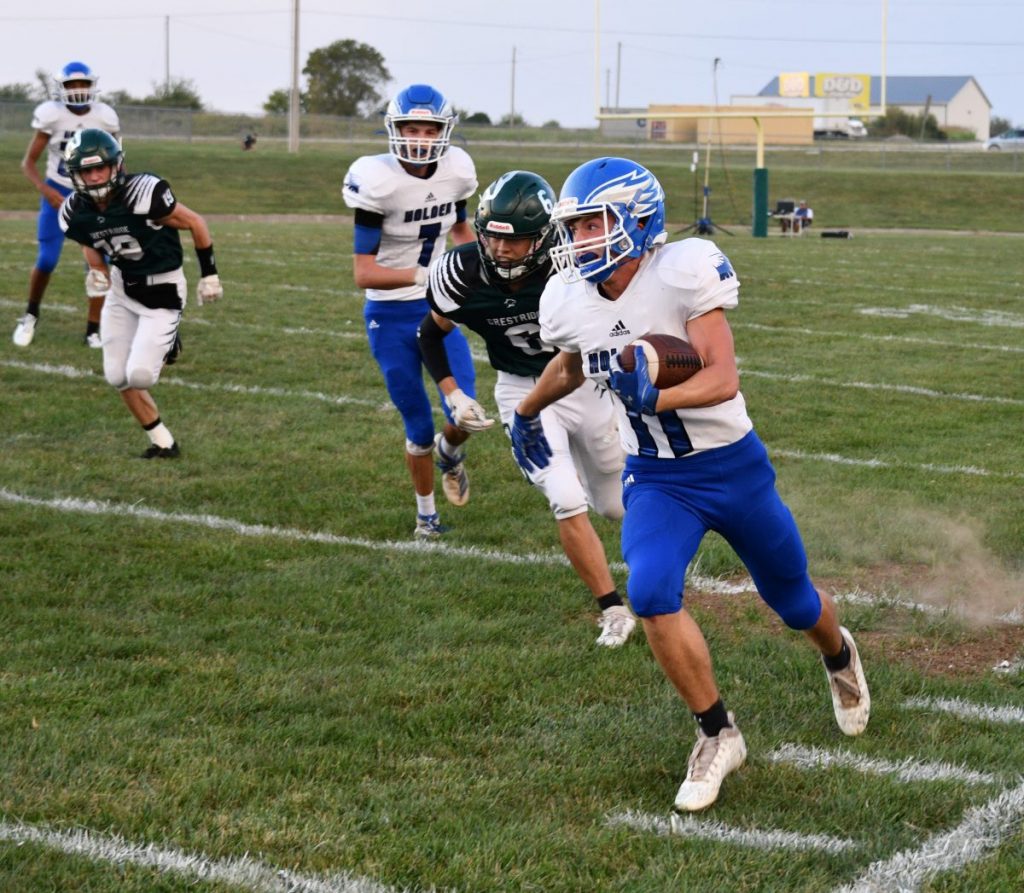 The Holden football team defeated Crest Ridge by the final score of 18-0 on Friday, September 17 in the Cougars’ Homecoming game.

The game featured two safeties scored by the Eagles linebacker Tyler Hankins, and two touchdowns from running back Reco Jenkins as Holden played its first game coming off of a Covid-19 quarantine.

“The situation is extremely unique, and our kids embraced it 100 percent,” said Holden football head coach David Diener. “We had a half-squad practice at 6 a.m. (today). We Zoomed every day since we’ve been put in quarantine. The mental prep they had was absolutely outstanding.

“The other thing that we did better than we ever have before is communicate up front because offensively, they (Crest Ridge) never lined up their defensive front the same way twice.

“Our guys talked, they blocked it out, they were on the same page, and man, they played hard,” described coach Diener.

“I can’t overemphasize that, and how proud I am because they deserve to play hard, they work hard enough that playing hard means something to them…just to see them get rewarded for their work.”

The Eagles capitalized on a Cougar fumble in the first quarter.

On Holden’s drive following the fumble, Jenkins carried the ball in for his first touchdown of the game. A failed two-point conversion left the Eagles ahead 6-0 with just over three minutes to play in the first quarter.

“I thought they were just way more physical than us,” said Crest Ridge football head coach Thomas Hotmer. “They showed a lot more pride and passion.
“We came out really flat, did not set the tone, and it was really hard to play cath-up from behind.”

The first half of the second quarter was marked by turnovers by both teams – an interception of a Cougars pass by Eagles defensive back Tyler Hankins, and a fumble by Jenkins inside the Cougars 10-yard line.

Eagles punt returner Hunter Higgins sparked his team with a burst for a long punt return near the end of the second quarter.
“He is a special teams oddity right now,” stated coach Diener of Higgins. “Right now he’s taking full advantage of that opportunity to get his hands on the ball. When he goes, he runs hard, and finishes runs.”

Higgins ended the game with 79 yards on 2 punt returns, and 41 yards on 2 kickoff returns for a net of 120 return yards on the night.

Jenkins would score on a seven-yard run following Higgins’s second quarter punt return. Jenkins carried the ball in on the two-point conversion to put Holden ahead 14-0.

Holden’s first of two safeties would be scored on a Cougars fumble that wobbled into the end zone, and was recovered in a scrum by Hankins.
The safety put Holden ahead 16-0 at halftime.

Following a scoreless third quarter for both teams, Hankins would put up two more points for Holden with a tackle in the end zone for the Eagles’ second safety of the game, and the final points of the night.

“I can’t say enough how great our defense is,” said coach Diener. “We’ve given up 13 points (all season) which is absolutely great, and we have those safeties. Those things don’t come around very often.

“Hankins stepped up, and did a great job at middle backer filling in for a spot.”

“I’ve been waiting for him to help us with the offense,” said coach Diener in regard to Brown. “We had a third-and-long, and we throw a hitch to him. He gets the first down.

“Hunter Higgins…we sealed the game on fourth-and-two, and we run a play that I know isn’t going to have good numbers,” continued coach Diener. “It’s a misdirection play, but right at that point, he was the kid who had worked the hardest who I knew would fight for the last two yards.
“It was fourth-and-two, and he got three-and-a-half yards. He absolutely sealed it for us at the end.”

Coach Hotmer summarized the game that leaves the Cougars 0-4 early in the season.

“This was actually our best week of practice,” said coach Hotmer. “We got our quarterback back, and I think that created a lot of excitement.
“The last couple weeks were close games. We felt like we left some out there. We were excited about this week, and I’m not sure what happened when we showed up tonight.

“It was a heck of a week, too. I thought the energy was great, and then it shifted tonight,” noted coach Hotmer. “At the end of the day, you’ve got to play the game. They came out, they were more excited and physical, and we were not…and it was from the start.”
Coach Diener noted the physicality of the game for both teams. “They were big, and liked to run downhill,” said the head coach. “I knew it was going to be a physical game. Every yard was earned.

“I’m so proud of my guys up front. I knew right away I was going to lean on them heavily.

“Trenton Day and Kole Shumate are the guys who mainly go both ways, and Aiden Christian. I’m telling you, those kids are absolutely outstanding with the effort they are giving.”

For Holden, Jenkins finished the game with 2 touchdowns, and 153 yards on 34 carries. Jenkins had 1 catch for 32 yards.

Eagles quarterback Aiden Morarity passed for 79 yards on 5 completions, and carried the ball 5 times for 7 yards.

On defense for Holden, Smith led the team with 6 tackles. Hankins totaled 2 safeties, had 4.5 tackles, 1 sack, had 1 interception. Reifsteck totaled 3.5 tackles, and 1 sack.

Brown totaled 3 tackles. Americo Mabrey and Kole Shumate each had 2.5 tackles, and 1 sack. Higgins and Koty Pugh each totaled 1.5 tackles.
For Crest Ridge, Dalton Wilhite rushed for 39 yards on 4 carries, and had 59 receiving yards on 2 catches.

After last week’s win over Crest Ridge, the Eagles football team holds an overall record of 2-1 with no conference games played.