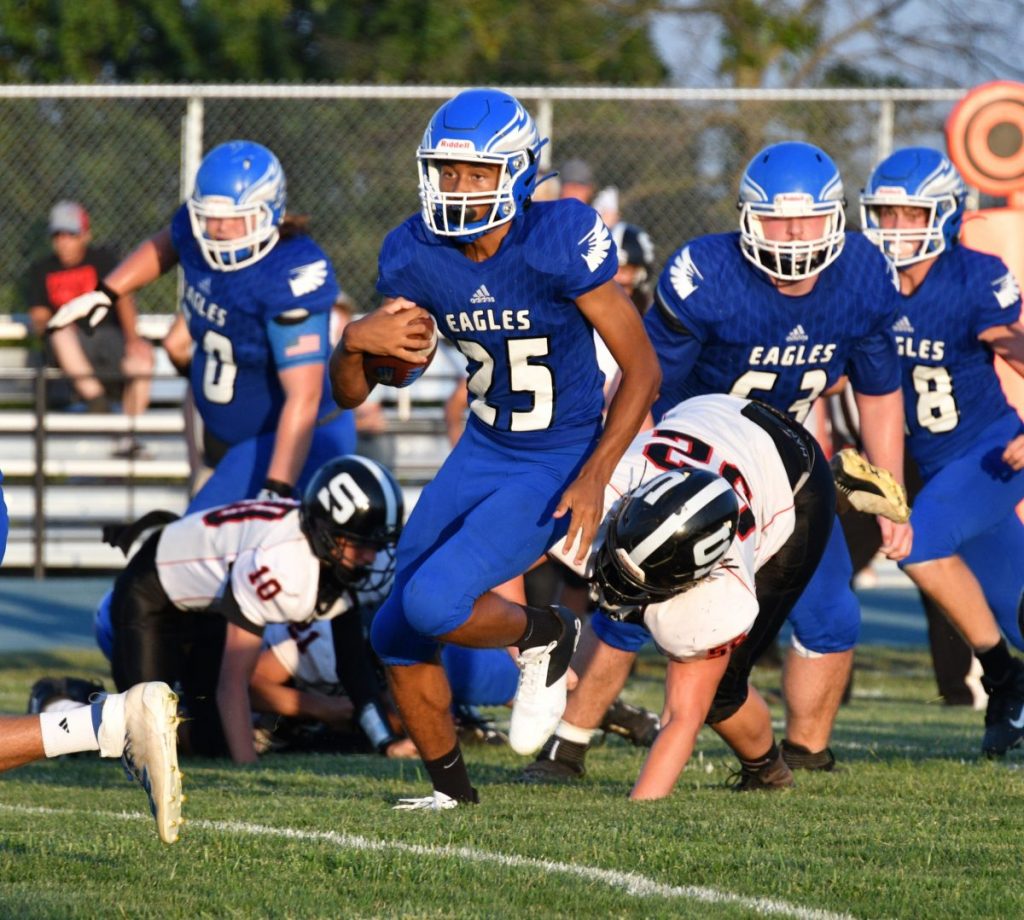 Running Riches… Eagles sophomore running back Reco Jenkins bursts to the end zone on a 37-yard touchdown in for Holden’s home season opener versus Sherwood on Friday, August 27. Jenkins would add four more rushing touchdowns in the game to finish with five touchdowns, and 116 yards on 14 carries. Holden defeated the Marksmen by the final score of 50-0 to open the season with a win. Photo by Steve Edwards

The Holden football team defeated the visiting Sherwood Marksmen in every phase of the game as the Eagles opened the season with a dominant 50-0 win on Friday, August 27. Reco Jenkins led the Eagles offense by scoring five touchdowns as defenders Hunter Higgins, Jarrin Brown, and CJ Reifsteck each recorded interceptions on the night.

Reifsteck returned his pick-off to the end zone as he put the icing on the cake for the final touchdown of the game.

Lane Inglis kicked the extra-point to set the final score with five minutes left in the game. “Before the game, I really pushed that this is a new start, and this is the first opportunity for us to show what we bring,” said first-year Holden football head coach David Diener. “They bought into everything that we were doing this summer, and this is the first opportunity. “They felt it, and took full advantage of it.”

The night’s scoring spree for the Eagles began early in the contest when Garrett recorded a safety against the Marksmen with just over 10 minutes remaining in the first quarter.

Jenkins would score his first touchdown a minute later on a 37-yard burst to the end zone. “Reco took huge strides carrying the football, as the game went on, too,” noted coach Diener of the sophomore running back. “He really got more confident with where seams are going to open up, and he’s starting to flash it up field.”

Danny Hartzler carried the ball in for the two-point conversion, and an early 10-0 Eagles lead.

Jenkins punched the ball into the end zone on the play after Higgins’s reception. Higgins snatched an interception near the end of the first quarter. On Holden’s first play after the interception, Jenkins scampered 23 yards down the Holden side of the field to pay dirt.

Holden’s defense continued to feed the offense in the second quarter when senior defensive back Jarrin Brown intercepted a Marksmen pass on Sherwood’s first drive of the period.

On first and goal from the eight yard line following Brown’s interception, Jenkins recorded his fourth score of the night.

Smith split two Marksmen defenders near the 10-yard line on his run after the catch. “The absolute best thing that I saw tonight out of our quarterback, Aiden, was his touchdown pass to Garrett, because Garrett was the fourth read on the play,” highlighted coach Diener. “For him to be able to go through that progression, and find Garrett and to deliver an absolute strike on the numbers that he can catch on stride was outstanding. “Garrett really wanted to score on the play, and took advantage of it. The last 10 yards was absolutely all Garrett.”

As the Eagles offense remained quiet for the remainder of the third period, the Holden defense kept Sherwood in check. Reifsteck’s fourth quarter interception finalized the scoring on the night.

In picking up the first win of his head coaching career, coach Diener noted the team effort in the victory. “First of all, we had three sophomores in the backfield, and for three sophomores to come in and take varsity action and handle it like they did is absolutely outstanding,” highlighted coach Diener of Jenkins, quarterback Aiden Morarity, and running back Jayden Davis-Hacker. “They stepped up. To come out and understand the offense and execute it and have as very few slip ups as we did with three sophomore backs is absolutely impressive on their part. “We knew that they had to grow up quick, and they did. “Jayden did exactly what we want him to do. We want him to be able to block, and then when he gets his carries, he has a big impact. His chunk plays were important for us.”

The full house in the bleachers gained notice from the head coach also. “The fans were outstanding. This whole town was hungry for a win. To produce, and produce as well as we did was a great step in the right direction.” Prior to last Friday nights win, the Eagles football team had suffered 10 consecutive losses.

Coach Diener took inventory of the team’s accomplishment coming off of last year’s season record of 0-8, and the team’s record of 3-15 over the past two seasons as the season moves on. “I told the kids you never forget number one, and this one, I won’t ever forget,” said coach Diener. “To be able to look in their eyes, particularly the seniors who have had very little success, for them to get this first opportunity is absolutely outstanding. “Man, it was good to see them play so hard, and just enjoy the game. “We’ll enjoy it, but we’ve got a big test next week. I genuinely think we’re going to come out, and going to be ready to go toe-to-toe with Boonville. They’re a great football team, a great physical football team. “They’re something that we want to be able to mimic as far as their downhill style of play, and down blocks. We do it a little differently, but we’re excited for the opportunity to see where we can go from this opportunity to a good challenge and see how we match up.”

Versus Sherwood, Jenkins totaled 5 rushing touchdowns, and 116 yards on 14 carries. Davis-Hacker gained 46 yards on 7 carries. Hartzler finished with 9 yards on 3 carries. Jacob Andes totaled 10 yards on 6 carries. Sauren Fulson had 1 yard on 1 carry. Morarity completed 3 passes for 125 total yards, and carried the ball 1 time for 7 yards. Higgins had 1 catch for 88 yards. Smith hauled in 2 catches for a total of 37 yards, and 1 touchdown. Smith led the defense with 7.5 tackles. Hartzler totaled 5 tackles. Americo Mabrey had 4 tackles.

Other tacklers included Tyler Hankins with 3, Wally Walker and Kole Shumate each with 2.5; and Higgins, Brown, and Trey Ransdell with 1.5 each. With 1 tackle apiece were Morarity, Davis-Hacker, Matthew Reynolds, and Koty Pugh. Those with assists on tackles were Reifsteck, Bryve Faust, Trent Stout, and Isaac Bell. Smith and Inglis each had 2 extra-point kicks. Higgins had 2 punt returns for 39 total return yards. Pugh had 1 kickoff return for 29 yards.

The Eagles host Boonville this Friday, September 3. Kickoff is set for 7 p.m.

By The Numbers…The Holden football team’s 50-0 win over Sherwood mark’s the Eagles’ first win after a streak of 10 losses…the football team’s last win prior to defeating Sherwood was recorded on Friday, October 18, 2019 in a 42-21 conference road victory at Carrollton…last Friday’s 50 points scored against Sherwood nearly doubles the team’s 29 points scored over the entire 2020 season.