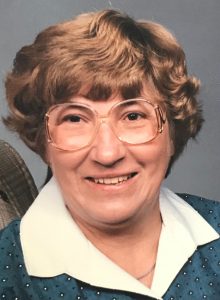 Agnes C. Logan, 86, of Parkville, MO, died peacefully on May 10, 2021, at Saint Luke’s Hospital, after a brief hospitalization.

She was born to Charles and Opal Burnfin on October 25, 1934, near Cross Timbers, MO. She attended several elementary schools and graduated from Latour High School in 1952, where she was valedictorian in a class of two.

She graduated from Central Missouri State College in 1955 and began teaching in the Park Hill School District that fall.

She taught second grade at Southeast Elementary for nine years and later taught as a substitute for many years.

It was at Park Hill that she met Francis E. Logan, who was working in maintenance at the school and later taught industrial arts.

They had four daughters. Agnes was a member of Park Hill Baptist Church. She loved flowers, gardening and quilting.

She sewed many clothes for her children when they were growing up, many of matching fabric, and sometimes including an outfit for herself.

Funeral services were held May 14 at Park Hill Baptist Church in Parkville with burial following at Rose Hill Cemetery.