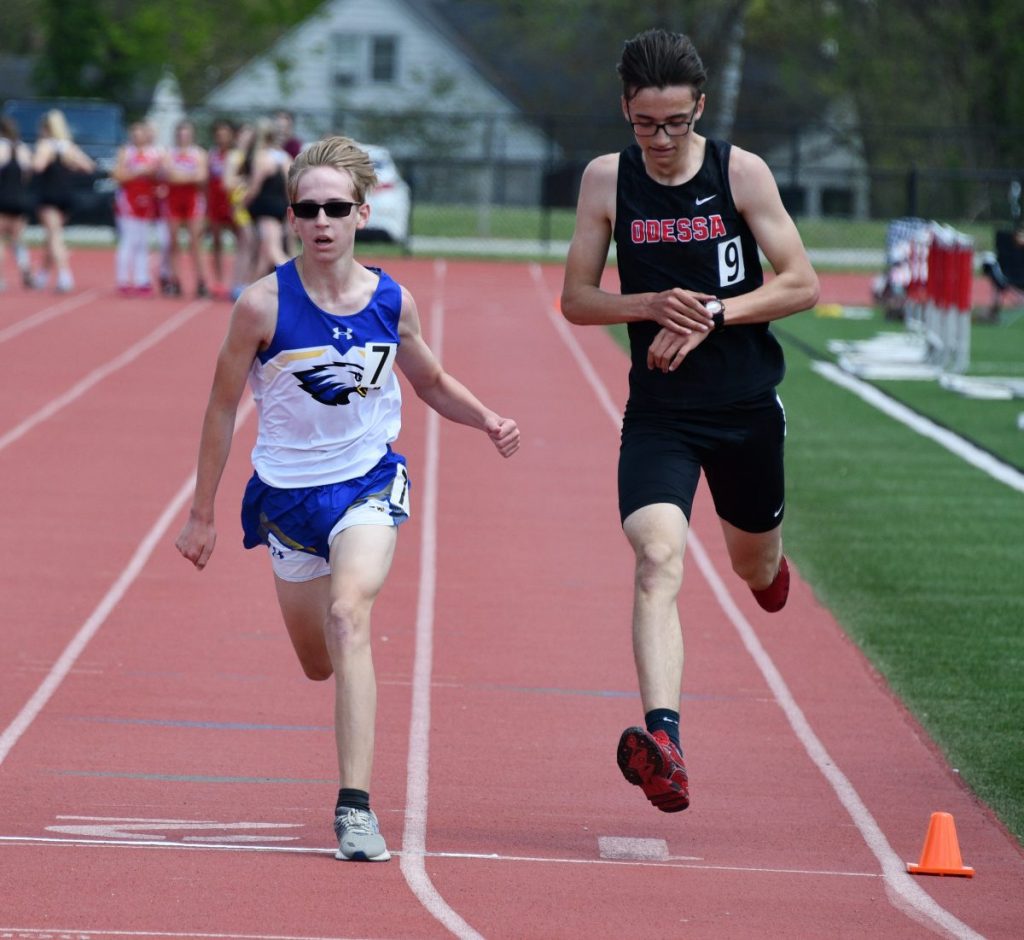 Photo Finish… Eagle distance runner Zack Willis (left) edged Odessa runner Gavin Zumwalt by eleven-hundredths of a second in the 3200m run at the Clinton Invitational Track and Field Meet on Saturday, April 24. Willis finished in sixth place with a personal record time of 11:29.58. Willis placed seventh in the 1600m run with a PR time, and ran on Holden’s 4x800m relay team in a seventh-place finish. Photo by Steve Edwards

The Holden track and field teams competed at the Clinton Invitational Meet at Clinton Middle School on Saturday, April 24.

After early morning clouds and cool temperatures cleared to sunny skies as the mercury rose, the Lady Eagles team emerged with an eighth-place finish among 11 teams with a handful of team members missing due to conflicts.

The Eagles boys found themselves in ninth place at the end of the meet. “It was great to actually have some sun and near perfect weather conditions after the last few meets have been so cold,” said Holden track and field coach.

In top individual finishes for the Holden girls team, and with the top eight placers in each event scoring team points, Sam VanHooser placed third in the discus, and fourth in the shot put.

Alli Iles turned in a sixth-place finish in the 1600m run.

Rachel Wamsley took a sixth-place finish in the 200m dash with a season-best time of 30.59 seconds.

Lady Eagle pole vaulters Sahara Tjardes and Elaina Young both posted a height of 2m with Tjardes taking sixth in the tie-breaker, and Young placing seventh.

The top relay team finish for the Lady Eagles came in the 4x100m race with Holden’s team of Abby Wamsley, Jocelyn McHenry, Rachel Wamsley, and Madeline Sharp placing fourth in a time of 58.40 seconds.

The Holden girls 4x200m relay team of Sharp, Natalie Moss, Rachel Wamsley, and Autumn Cantrell carried the baton to the finish line in a time of 2:04.14 for a fifth-place finish.

The Lady Eagles 4x800m relay team also finished in fifth place with team members Gabby Gard, Abby Wamsley, Alli Iles, and Gracie Carver toting the baton. “The girls did well,” stated coach Gudde of the team effort. “We will try to refine our relays, and shore up the handoffs.

Most girls already know where they will be in the open events, so we just need to solidify the relays. “We hope to be back at full strength by this Friday,” said coach Gudde with Holden’s Senior Night Meet, and second home meet of the season set for April 30.

In the long hurdles race, Powell clocked a time of 45.01 seconds.

In the short barriers race, he posted a time of 17.71 seconds.

Powell posted a seventh-place finish in the 200m dash with a season-best time of 25.31 seconds. “Masyn is looking good,” said coach Gudde. “He is dedicated to the hurdles, and does whatever he can outside of those two events to make himself better. I expect big things for him.”

Tyler Hankins and Tanner Atkins both posted a height of 1.6m in the high jump with Hankins taking fifth place in the tie-breaker.

Atkins’ height, which marked a season-best for the senior, placed him in sixth.

In a strategically run 3200m race, Zack Willis drafted off of Odessa runner Gavin Zumwalt through a majority of the race’s eight laps.

Willis edged Zumwalt by just over one-tenth of a second to give Willis a sixth-place photo finish. “Zack has been fantastic, and his times just keep getting better,” said coach Gudde. “He will be a leader on this team in the future.”

In the 1600m run, the sophomore Willis posted a personal record time of 5:20.94 to place seventh.

The top relay showing for the Holden boys team came in the 4x800m race with team members Michael Rinella, Tanner Atkins, Lukas Hunt, and Wills carrying the baton to a seventh-place finish.

As mentioned, the Holden track and field teams host the Holden Blue and White Invitational Meet this Friday, April 30, as the Eagles and Lady Eagles celebrate Senior Night.

Field events start at 3:30 p.m. on Friday with running events beginning at 4.