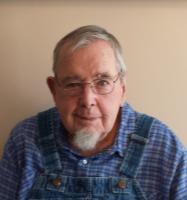 Preceding him in death were his parents, Carl Cates and Lilly Sisco-Cates; brother, Clifford; and sister, Manita Strawn.

After he graduated, he went to work for Sheffield Steel in KCMO and later joined the Navy, serving on the Battleship Iowa.

While serving in the Navy, he married Reva Thompson on November 29, 1952.

After serving in the Navy, he returned to work at Sheffield Steel.

In 1958, Garland accepted Christ as his Savior and was baptized into the Baptist Fellowship.

He and Reva resided in Independence, MO. and raised their two sons during the 30 years he worked for Sheffield Steel.

Garland retired in 1981 and returned to Alton where they farmed until 2013.

In 2013 they retired from farming and moved to Holden, MO.

Arrangements were under the direction of the Clary Funeral Home, Alton, MO.