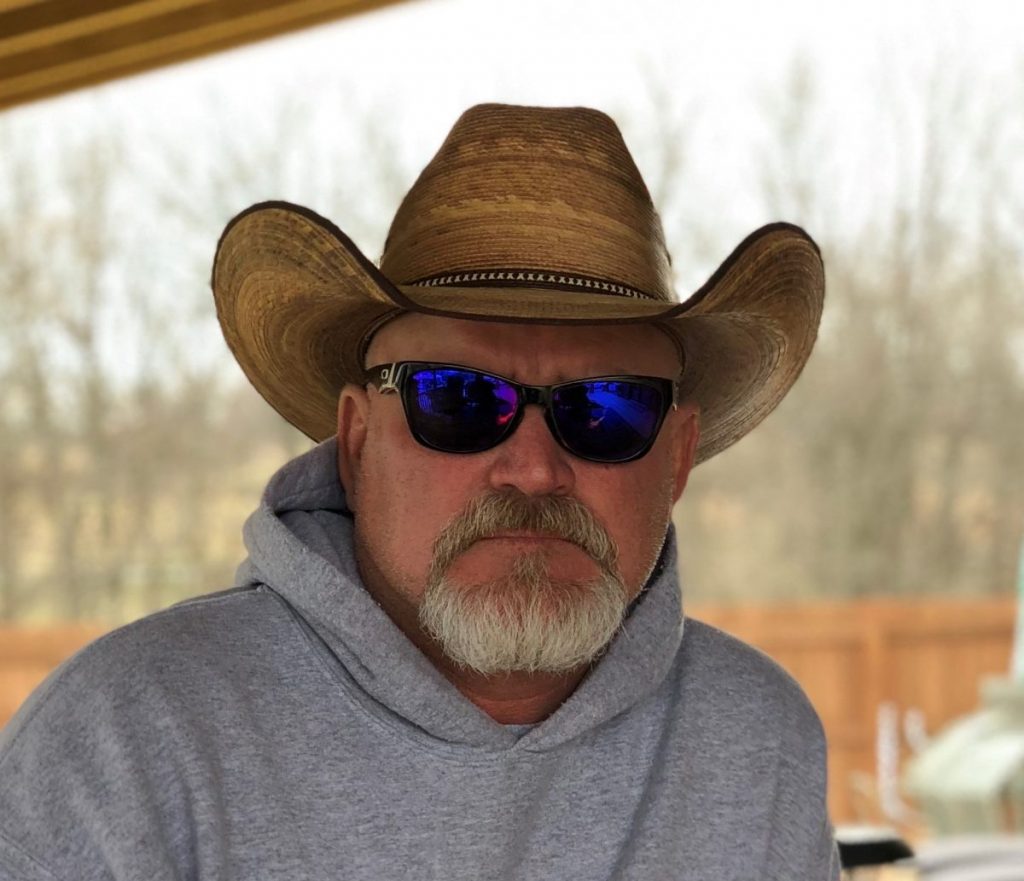 He was born October 6, 1963 in Independence, MO, the son of Walter and Shirley (Alley) Hutcherson.

He graduated from Oak Grove High School in 1982.

He loved playing football in high school and some of his best memories were talking about his football days as a Panther and how they came one game short of playing for the Missouri State Championship.

On May 19, 1990, he married the love of his life, Carrie Crawford, at First Baptist Church in Centerview.

Out of that love came three children that he adored and would do anything for.

Dalton, Whitney and Carlee were his pride and joy!

One didn’t have to be around Dennis very long before he would brag about his kids.

Dennis worked the majority of his years for his father-in-law, David Crawford, who he lovingly called “Bossman,” at Crawford Mechanical Contractors, until Dave’s death in 2015 and the business was closed.

He was a Local 101 Heavy Equipment Operator for 29 years and he loved to be challenged with jobs that allowed him to prove exactly how good he was with a machine!

Those who worked with him have often said that he was the best operator they had worked with and if there was a challenging digging job, they wanted Dennis on the job!

But Dennis never did anything half-way in his life.

He always had to be the best at whatever he did.

Dennis had a love of horses and learned how to rope in high school, and in 1982, he won the Missouri High School Rodeo Finals Championship.

He and Carrie made life-long friends as they traveled across the state of Missouri to rodeo after rodeo.

When they started their family, they traded in the horses for a camper and a boat and they loved nothing more than time spent with their family on the lake!

Dennis was a self-proclaimed wakeboard coach and he was in his happy place when he was pulling someone around Pomme De Terre Lake on a wakeboard!

Any tribute to Dennis would not be complete if it didn’t include his ability to make people smile.

He had a keen sense of humor and most of those who knew him can think of at least four or five “Dennis-isms” that made you wonder how someone thinks of things like that!

Close behind the love of his family was his love for visiting with people!

He never met a stranger and would often be seen making rounds at the lake on the golf cart visiting with anyone that he could strike up a conversation with!

His ability to talk to people drew them to him and his charismatic personality!

He loved fiercely and truly lived life to the fullest!

He never believed in waiting until tomorrow to do something that he wanted to do because he always knew that tomorrow is never promised!

He had a life-force about him that was the perfect combination of genuine and fun!

Dennis would tell you that the most important decision of his life was accepting Jesus into his heart and getting baptized.

Because of that decision, he and his family know that they did not say goodbye as they stood around his hospital bed.

It was simply “See you later!” His body is no longer in pain and he is in the arms of Jesus after fighting valiantly nearly 100 days in the ICU on a lung bypass called ECMO.

They will miss him greatly during their days on earth, but they are comforted in knowing that he will be at those infamous pearly gates to welcome them to their heavenly home!

Until then, they will strive to carry on his tradition of enjoying life to the fullest and make him proud!

Memorial contributions are suggested to the Carlee Hutcherson Scholarship Fund and can be left in care of Sweeney-Phillips & Holdren Funeral Home, or dropped off at F&C Bank in any of their locations in Holden, Warrensburg, or Lone Jack.