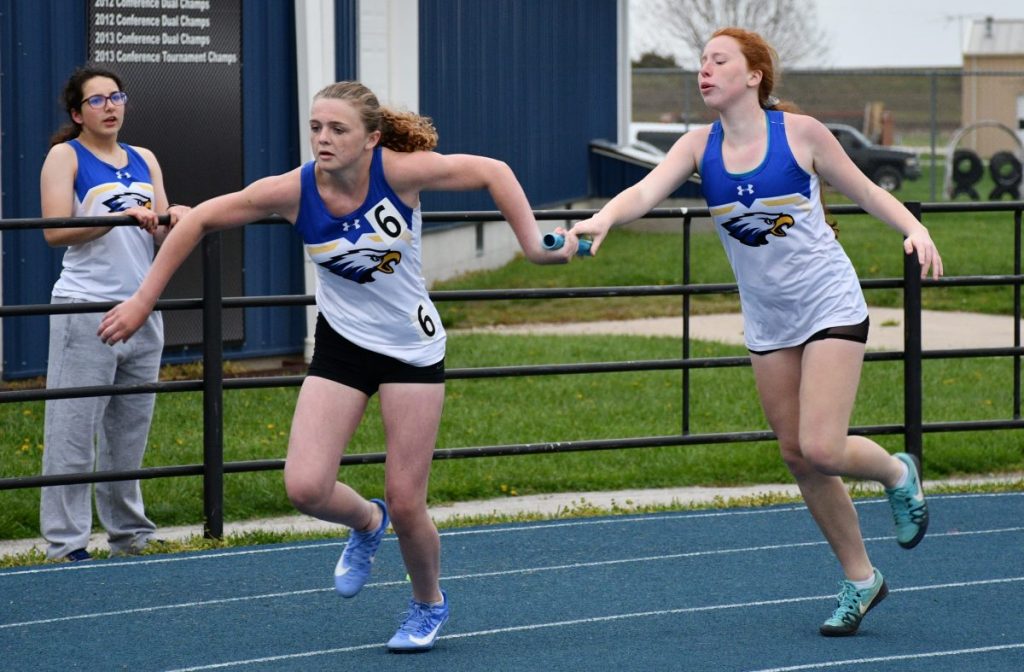 Good Handoff… Lady Eagle Natalie Moss (left) takes the handoff from Autumn Cantrell during the 4x200m relay at the Holden Eagle Invitational Meet on Friday, April 4. Moss, Cantrell, Kimmie Spring, and Rachel Wamsley carried the baton to a fourth-place finish in the race in a season-best time of 2:01.90. Photo by Steve Edwards

The Eagles and Lady Eagles track and field teams hosted and competed against 13 teams at the Holden Eagle Invitational Meet on Friday, April 9.

As head coach Spencer Gudde, meet officials, and meet workers worked to complete the meet before an incoming rainstorm in the forecast entered the area. Holden’s track and field athletes turned in several top finishes, and numerous season-best performances.

“It was good to get it in, and it was great timing with the weather,” said coach Gudde. “The boys team is coming along, and we are starting to find which boys will fill out spots as we get closer to the postseason.

“The girls are progressing as well. We will hopefully start lining out relays in the coming weeks, and make sure we have the best ones ready to compete when it matters most.”

As a team, the Lady Eagles placed second.

Davidson took first place in both hurdles races at the meet. The sophomore clocked a season-best time of 17.93 seconds in the 100m hurdles, and a season-best time in the 300m hurdles at 52.11 seconds. Davidson also turned in a sixth-place finish in the high jump with a height of 1.35m (SB).

VanHooser grabbed the gold medals in both the shot put and the discus field events. The senior’s put of 10.5m put her at the top of the leader board in the shot, and her discus distance of 33.53m proved to be a season-best distance.

Klover turned in a second-place height of 1.45m in the high jump, and timed out at 2:40 (SB) in the 800m run for a third-place finish.
“They are doing great, and their marks just keep getting better,” said coach Gudde in regard to Davidson, VanHooser, and Klover. “They will score lots of points when we get to the conference and district meets.”

Another top-six finisher for the Lady Eagles was Rachel Wamsley with a fourth-place finish in the 400m dash in a time of 1:10 (SB).
Peyton Kilgore placed fifth in the discus.

Sahara Tjardes, Elaina Young, and Natalie Moss each tied for sixth place in the pole vault with a height of 2m.

The top relay race showing for the Lady Eagles was turned in by the 4x800m relay team of Klover, Gracie Carver, Alli Iles, and Abby Wamsley. The team clocked a time of 11:34.80 (SB) to place third.

Davidson, Moss, Iles, and Klover placed fourth in the 4x400m relay with a time of 4:46.93 to close out the meet for the Lady Eagles. 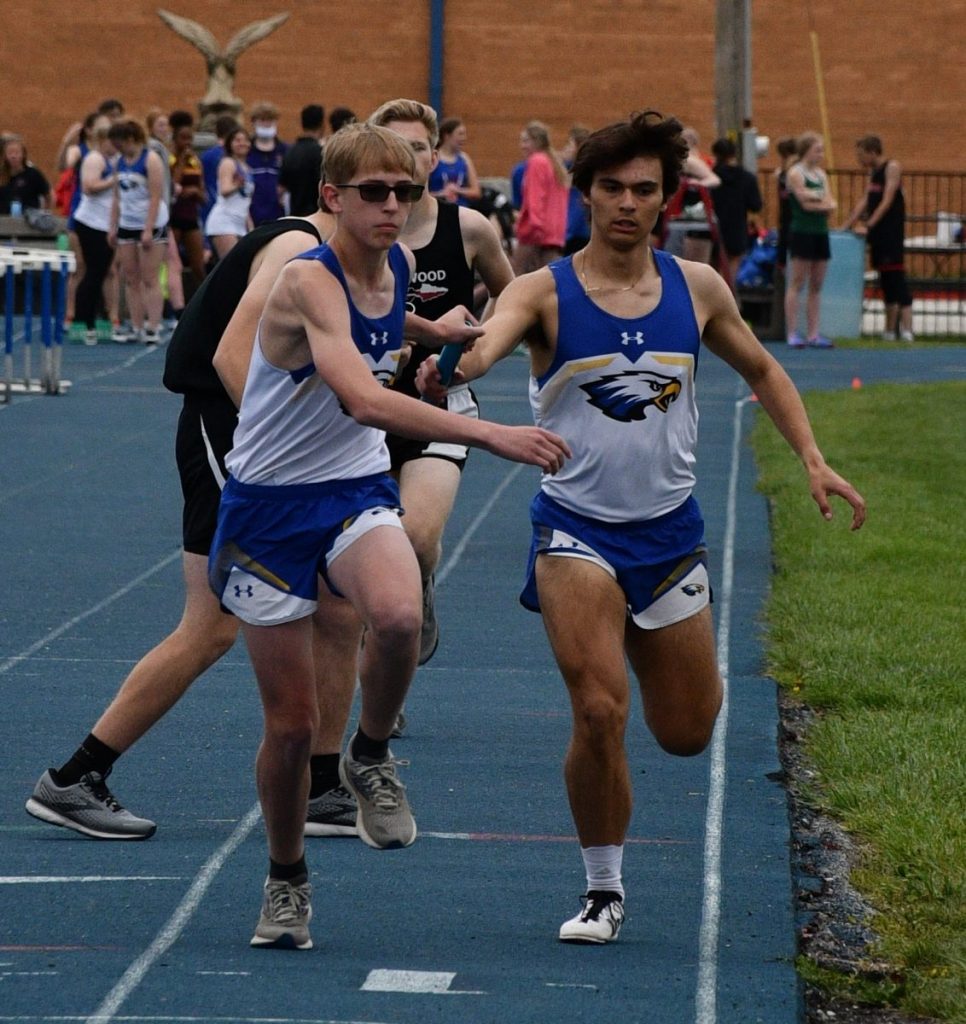 Distance Duo… Eagle distance runner Michael Rinella (right) hands the baton off to Zack Willis during the 4x800m relay race at the Holden Eagle Invitational Meet on Friday, April 9. Holden’s 4x800m relay team of Rinella, Willis, Carson Moreno, and Brian Johnson placed eighth at the meet. In the 3200m run, Rinella had a fourth-place finish, and Willis finished sixth with both runners posting season-best times in the race. Photo by Steve Edwards

Multiple top-six placings and season-best times were displayed by the Eagles boys team with Tyler Hankins turning in the top performance for the squad.

Hankins set a personal record height of 3.2m in the pole vault to place first in the event.

Distance runners Michael Rinella and Zack Willis both turned in season-best times in the 3200m run. Rinella clocked out at 11:51.45 in fourth place; Willis posted a time of 11:56.69 to finish sixth.

“They will hit their stride when it matters most,” noted coach Gudde of the boys’ team’s top placers at Holden’s home meet.

Keyghin Orcutt placed fifth in the shot put with a distance of 10.25m (SB).

The 4x400m relay team of Powell, Tanner Atkins, Johnson, and Wally Walker took a fifth-place finish with a time of 3:55.96.
As a squad, the Holden boys track and field team finished in sixth place on the day.

“We will just keep our focus on what we have been doing so far…work hard in practice, and compete in meets,” summarized coach Gudde’s of the track teams.