That is the amount of time that passed between the Holden baseball team’s final game of the 2019 season – an extra-inning 8-5 loss to Lamar in the first round of the district tournament on May 13, 2019 – and the Eagles’ 2021 season opener versus Sherwood on Monday, March 22.

The cancellation of the 2019-20 season due to the Covid-19 pandemic led to the baseball drought for Holden, and teams across the state.

In last Monday’s season opener, Eagle sophomore pitcher Garrett Smith provided 10 strikeouts in his career debut on the hill while Holden racked up 15 runs on the scoreboard for a 15-1 win over the visiting Marksmen.

With nine batters making plate appearances in the first inning, Holden produced four runs on no hits to initiate a unique game on the dawn of a unique season.

“You take what they give you,” said Holden coach Dave Riley. 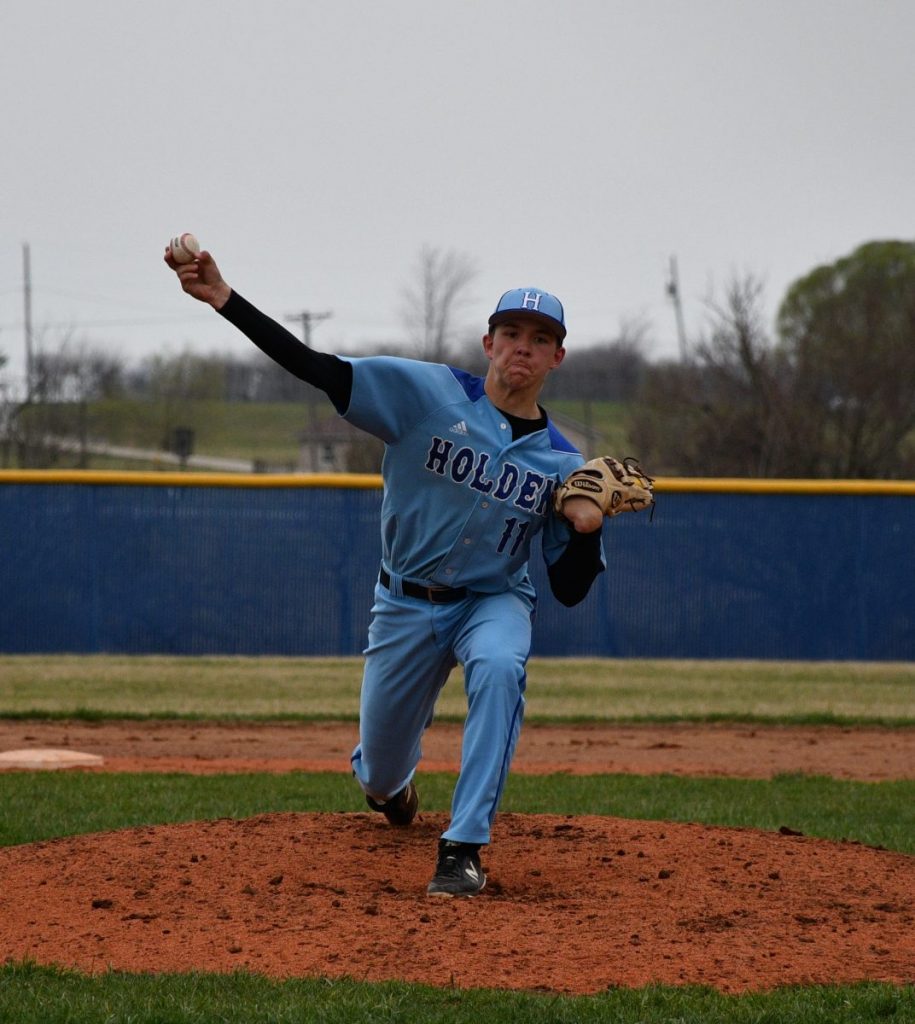 “We want to hit the ball. We want to get in, and get after it. We took what they gave us. The kids did a good job of not chasing bad pitches.” Eagle second baseman Lane Richardson provided Holden’s first hit of the game, and of the season – a single in the second inning.

Two batters later, Smith doubled to put runners at second and third base.

Richardson scored on a ground out by shortstop Aiden Morarity. Wyatt Barron doubled to drive in Smith. A hit by Andrew Catron scored Barron for Holden’s third run of the inning, and an early 7-0 lead after two innings of play.

“We took a lot of walks,” noted coach Riley. “We hit the ball pretty good. Wyatt Barron had a great line drive double. We made some good hits. “Lane Richardson had a hit down the first base line, our first hit of the year.

Holden added a run in the third inning before Sherwood plated its lone run of the game in the top of the fourth.

Seven runs scored by the Eagles in the bottom of the fourth, for which the Marksmen had no answer in the top of the fifth, ended the run-rule shortened contest.

Senior Avery Graves relieved Smith at the start of the fifth inning.

After allowing a leadoff walk, Graves recorded a strikeout, pitched for a pop-up out, and coaxed a ground out that was fielded by catcher Ryan Miller for the final out of the game.

“I knew he had a pretty good arm watching him in practice. “We were planning on him being a pretty big part of what we were doing last year. He was throwing good. Ten strikeouts, one walk, and only one hit,” cited coach Riley of Smith’s stat line.

“We’re super proud of that effort. We weren’t going to let him go a whole bunch of pitches because it’s early, and we’ve got other guys who need to see the mound. “That’s a great effort for his first high school baseball game. We’ll take that. “Ryan did a good job of controlling everything behind the plate,” noted coach Riley.

“The last time we were out here, I didn’t know if I’d ever be back out here,” said coach Riley who retired from teaching at the end of the 2019-20 school year with the hopes of returning to still coach the Eagle baseball team.

“I’m just thankful that the school gave me the opportunity, and we finally get to the place where we can get back out and do fun stuff for the kids.

“That’s what this is. This is fun. It was awesome to spend time at a baseball field, and play a game.

We have waited a long time to get back to this point, and soak it all in.” Holden’s performance on the field to start the season with a 1-0 record eases some tension resulting from entering the season with an entirely new roster.

“I was happy to see our guys make their pitcher work, and when they got on base they were aggressive,” said coach Riley.

“We did a pretty good job of that. “We had two freshmen, and three sophomores. We’re young. We’ve got guys pushing them. Without having anybody out there from before, it’s different.”

Coach Riley tipped his cap to Sherwood with most teams experiencing an adjustment to new lineups this year after having missed last season.

“Sherwood will get better. They’re young. They have a lot of guys who haven’t played like we have.” Picking up a 15-1 victory to start the season quelled some apprehension the Eagles had heading into Holden’s first game since the 2019 team’s season-ending district game versus Lamar one year, 10 months, and nine days prior.

Work still remains to be done as this year’s team adjusts to the field of play. “It was a pretty good day. It was enjoyable to get back out here to the field,” said coach Riley.

“We were happy with the start, but know that we have a bunch of things we have to improve on as the year progresses.” The season progresses this Wednesday, March 31, as the Holden baseball team hosts Crest Ridge for a varsity game at 4:30 p.m.

The JV game follows the varsity contest. On Thursday, April 1, the Eagles travel to Lexington for an MRVC-East contest.