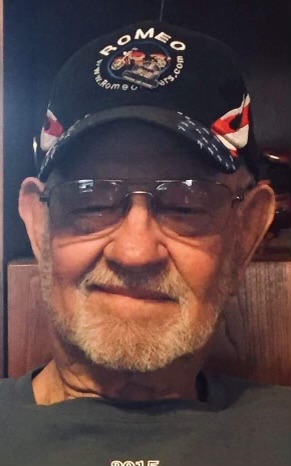 George was their fourth and youngest child, he was welcomed home to the family farm in Holden, Missouri by his brother William and his two sisters, Betty and Joan.

George grew up on the family farm and attended Stout School.

George was independent and hard-working from a young age.

Together, they lived in Holden for six short months, until George was drafted into the Army in December of 1956 at the age of 22.

George and Mary moved to Massachusetts, and then on to New York, at the orders of the Army.

After two years of service, George and Mary moved back home again and lived in a small house on the family farm.

It was there that they welcomed their first baby girl, Laura, in December of 1958. Laura was born only two weeks after George was discharged from the Army.

Over the next three years, George built a house on the family farm, and after moving into their new home, George and Mary welcomed their second daughter, Susan, in September of 1961.

George and Mary lived near Holden for seven years prior to moving to Lee’s Summit, Missouri, where they lived when they welcomed their third daughter, Tonya in May of 1967. After returning home from the Army, George returned to his job at Bendix, where he worked for 23 years.

After his time at Bendix, George worked for Crosby Vending for several years, and finally moved on to spend 13 years working for Apple Bus company.

George enjoyed driving his bus and made many friends during these years.

He was able to enjoy these friendships even after he no longer worked for the company.

He was a loyal friend to them until his death.

George enjoyed several hobbies throughout his life, most of which involved an engine of some kind.

George was a mechanical genius, he spent hours on end working on anything, from John Deere Tractors and classic cars to motorcycles.

Motorcycles were a true love for George, and he spent many, many hours driving miles and miles on end.

Through his love of motorcycles, he found many friendships in his local ROMEO group – “Retired Old Men Eating Out.”

George enjoyed his time with the friends he made, and he spent countless hours riding and visiting.

If you knew George, you knew that he lived his life a little bit on the edge, and he was able to successfully recover from numerous injuries sustained in many motorcycle crashes over the years.

There’s a rumor of one such crash he suffered while riding in a field, that ended in spilled gasoline and George running across the pasture with his pants on fire.

Even that incident couldn’t slow George down, and each time he returned to continue riding.

George loved his family, he found opportunities often to speak highly of and tell stories about his daughters and grandchildren.

George always had his wits about him, even during the bad times.

Just after his last motorcycle crash in 2017, he was lying in the back of the ambulance, visiting with the state trooper on scene about his family.

George was dearly loved by his family, many friends, neighbors and co-workers.

George was preceded in death by his parents; and his three older siblings, William, Betty and Joan.

He is survived by his three daughters Laura (Eric), Susan, and Tonya (Dan); and his 10 grandchildren and their families.

Funeral Services were held at 2 p.m. on Tuesday, March 23, 2021 at the funeral home, with Pastor Rick Friesen officiating.

Memorial contributions may be made to Campbell-Cast Funeral Home, in memory of George Lowe.

Online condolences may be given at www.castfuneralhome.com.