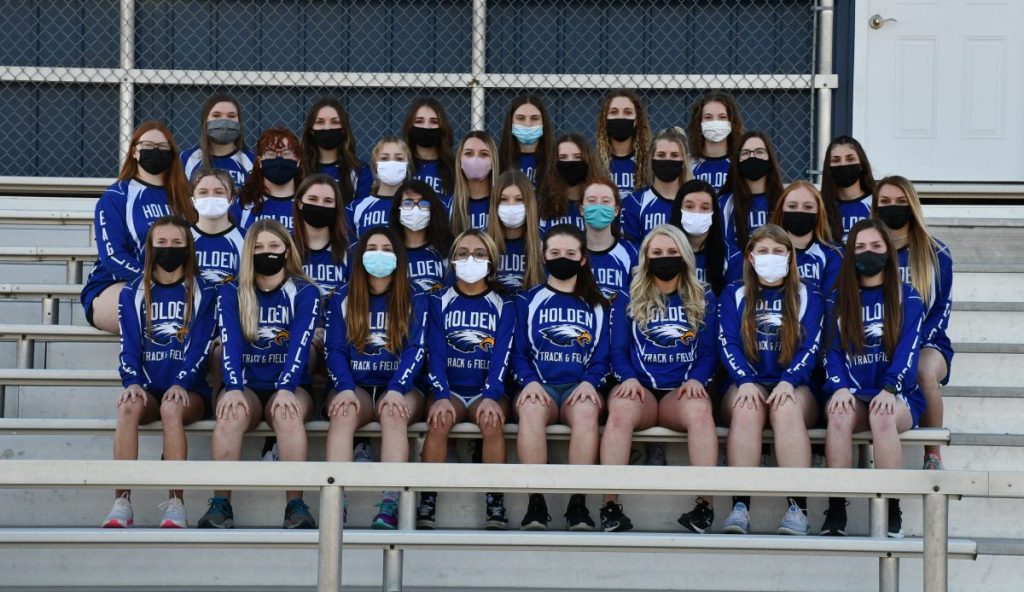 Practices are underway for the 2020-21 season of the Holden Lady Eagles track and field team with 33 athletes on the squad greeting ninth-year head coach, and first-year Holden R-3 Activities Director Spencer Gudde.

Coach Gudde and the Lady Eagles team members enter the upcoming season in a unique situation after the cancellation of last year’s track and field schedule due to the Covid-19 pandemic.

“I feel like everyone is new simply because we did not have much of a season last year, so I have to get everyone up to speed, my coaches included,” says coach Gudde. “So far, everyone has done a fantastic job, and I expect it to only get better.

“The girls team has good numbers, so I expect them to do well as a team.”

Seniors lined up to compete last year before the cancellation of the season, and now gone due to graduation are previous impact performers and team leaders Camille Gudde, Valorie Slack, and Lilly Spring. Coach Gudde guided daughter Camille through four cross country seasons, three years of track and field, and was poised with high expectations for all three of those seniors last season.

All three graduated seniors were all-conference, all-district, all-sectional, and all-state performers during their careers. They all three etched their names in the Holden track and field record books with Gudde and Slack running on the Lady Eagles’ fastest-ever 4x800m relay team, and Spring setting the school record in the 300m hurdles. Each of those departed Lady Eagles now compete in sports on the college level.

The freshmen members of this year’s team will be accepting the opportunity to contribute to this year’s Lady Eagle squad, as well as the sophomores, and many of the upperclass team members after the cancellation of last season.

“Most of them are new since we did not have a season last year,” notes coach Gudde of the team makeup. “I am excited to see what the newcomers bring to the table.”

Coming off a season that never was, and with Covid-19 restrictions in effect for most extracurricular school events, coach Gudde notes, “This season, my focus is to keep everyone as safe as possible, and to let the kids get a season in.”

Early-season preparation for the track and field season has been aided by favorable spring weather.

“It has been a blessing to get things started, and to improve morale for the team,” notes coach Gudde of the clear skies and sunshine greeting this year’s team in early practices.

With a string of four consecutive MRVC-East championships interrupted by the cancellation of last season, coach Gudde expects the Lady Eagles to soar back to the summit above the other top teams in the conference.

“I expect the girls to be competing for the top spot,” states coach Gudde as he finds himself in a unique situation of guiding the Holden track and field program while also performing activities director duties during a particularly unique school year.

The head coach states that his excitement for the upcoming season is based on, “Simply the fact that we get to have a season, and I get another chance to coach.”

The Lady Eagles track and field team opens the 2020-21 season on Thursday, March 25 with an invitational meet at California High School. The meet starts at 4 p.m.