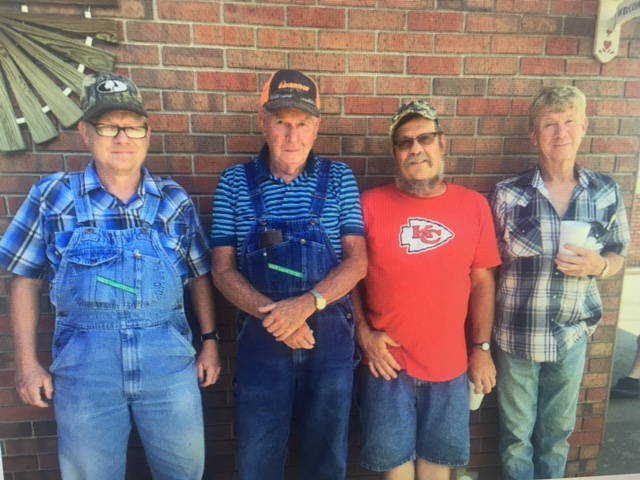 So long, old friend… Longtime Holden businessman and lifelong resident Wayne Carter passed away on January 28, 2021. He is pictured here with his sons, Neil, John and James. Wayne was a loving husband, caring father and grandfather, and a loyal friend to many. He will be missed. Photo submitted

He attended school in Holden all 12 years, graduating with the HHS Class of 1951. Wayne was united in marriage to Sandy S. Hetherington on March 9, 1981, in Oklahoma.

Wayne and Sandy owned and operated The Cowboy Inn, a beloved longtime business establishment, in the heart of downtown Holden.

Prior to working at The Cowboy, Wayne owned his own construction company, called Carter Construction, for many decades.

You can drive up and down the streets and country lanes of Holden and Kingsville and see many of the homes he built throughout his career.

Many say you could always tell which houses Wayne built, because they are all straight and true and of the best craftsmanship around these parts.

Before he graduated, friends remember he was an excellent athlete, participating in high school sports and a host of other activities.

Among the things he excelled at was football and he was honored to be a member of the Holden High School Hall of Fame.

Wayne played on the first-ever undefeated football team in the history of  HHS when he was just a sophomore.

Wayne never knew a stranger and would visit with many who came into The Cowboy.

He had a few lifelong friends who remained close to him from childhood on.

Sam Raber met Wayne at the age of five or six and the two remained friends throughout their lives.

Worley Eagleson was also a lifelong friend, having met Wayne when he was nine years old.

Both Sam and Worley have fond memories of their years of friendship with Wayne.

Sam explains that after high school, Wayne went to work for local contractors where he learned the building trade that would later become his lifetime career path.

About two years after high school, during the Korean Conflict, Wayne joined the U.S. Army, as did Sam, and Worley enlisted in the Marine Corps. “Upon returning from the service, Wayne continued in the building trade, first in a partnership with Joe Huber and then on his own,” said Sam.

“In addition to the many challenges and decisions associated with operating a successful business, Wayne showed interest and dedication to the Holden community by serving on the Holden City Council and being involved in other civic activities,” added Sam.

Wayne was also a proud member of the Holden VFW Memorial Post #5844.

Worley remembers that although he and Wayne were in different branches of the military back in the ‘50s, they always kept in touch.

Worley, like many others who knew Wayne, speaks of his kindness and his willingness to always help out a friend or neighbor.

“When I had heart surgery in 1974, neighbors came over and plowed and prepared my farmland,” Worley recalls.

“Wayne didn’t have a tractor but he brought his tools and did some carpentry work that I needed done.

And I never even got a bill for the materials he used!” Worley continued, “I guttered lots of houses that Wayne built throughout the years.

They were always level and square and easy to gutter! “Wayne was an honest, hard-working man. If you shook hands with him, you had a deal!” Sam remembers, “Wayne was one who never expected or wanted any recognition for his many contributions to the Holden community.

“However, those contributions are evident throughout the community in places and activities that enhance the lives of the entire community.”

“Wayne and I never had a cross word in all those years,” Worley fondly remembers. “He was a fair, kind man. The whole community will miss Wayne.”

In addition to Wayne’s civic contributions, he coached Little League for many years, impacting the lives of countless young athletes and sharing his love for the game.

Wayne was a true, behind-the-scenes community servant and he had a profound positive effect on many over the years, both as a friend and a mentor.

Tony Lerda, longtime friend of Wayne’s, remembers his contributions to the Holden Water Dept., and says some of his work is still evident and functioning today.

“I first met Wayne in 1975, when I went to work for the water department,” Tony said.

“The department did not have a backhoe, and Wayne Carter and Jack Hall did all of the digging for us on the distribution system.”

For years Wayne was Ralph Stansberry’s “go to” guy, according to Tony. “Back then, we had a lot of water main breaks, three or four a week, at all hours of the day and night and always on holidays,” added Tony.

“Wayne was at every one of them, and never complained a bit. “In 1973, Wayne constructed the upflow flocculator/clarifier that was relocated out to the treatment plant at the City Lake and it is still in use today.”

Tony went on to say, “Wayne was a rich man – rich in heart. He chose to practice his trade and serve the people of his home in Holden, Missouri. “In doing so, he accumulated many good friends and was surrounded by a huge family that he loved, and who loved him back.”

It’s evident by talking to Wayne’s friends, that he had a huge impact on their lives and he leaves a big hole that will never be filled.

Wayne built their family home in the country many years ago. “He liked woodworking and also enjoyed gardening,” Sandy remembers.

And he never lost his love for football. “He was at most of the home football games; you could find him at the fence near the entrance,” she added.

Wayne’s garden was his passion, according to Sandy. He grew a lot of vegetables and enjoyed making juice, primarily tomato juice but he did dabble with the creation of V8-type of juice as well.

Wayne spent many years as a faithful gardener and enjoyed it immensely. Since carpentry was his chosen field of work, it was only natural that he was a master at woodworking as well.

Wayne built high quality items, such as tables, cabinets, and also Sandy’s China hutch, along with numerous other wooden creations.

He made a positive impact on the Holden community and everything else he got involved in with his selfless, behind-the-scenes civic actions.

Even now you can see some of the work of his hands, by driving around and admiring his handiwork of homes, some built back in the early ‘60s.

Wayne and Sandy spent the last 40-plus years together and they have a large extended family who will miss Wayne’s unique sense of humor, his wisdom, and most of all, his steadfast love for all of them.

Wayne Carter was a loving husband, a caring father and grandfather, and a loyal friend to all who had the privilege of knowing him.

He was laid to rest on February 2, 2021 at the Holden Cemetery with Full Military Honors provided by United States Army Honor Guard, Holden VFW Post #5844 and Munday-Hancock Post #90, American Legion.

Wayne lived his life simply, but he was passionate about his hometown and his family and friends.

He led by example and showed what true integrity and character look like.

He leaves behind a legacy of dedication to his community and hard work. Wayne will be forever missed and loved by so many.