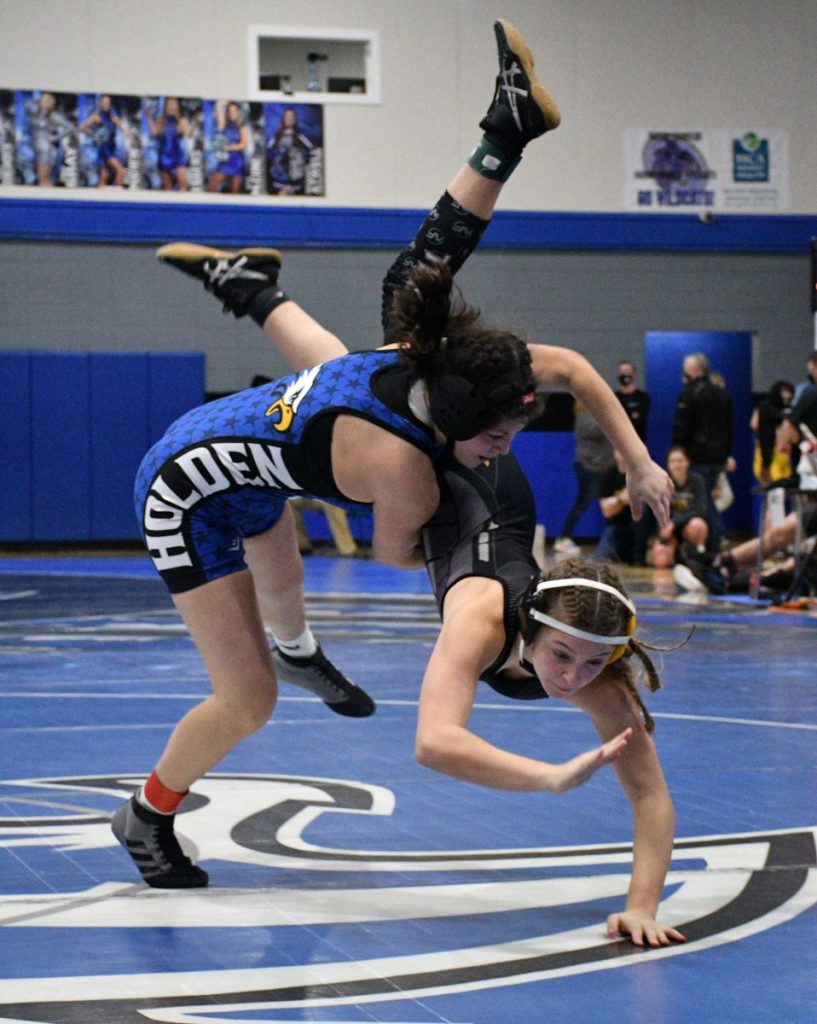 Textbook Takedown… Lady Eagle wrestler Tasia Lee (left) takes Cassville wrestler Faith James to the mat during the 137-pound first place match at the Class 1, Sectional 3 Tournament. Lee won by injury default over James to give the Holden sophomore Lee the sectional championship in her weight class. With the top-three sectional finish, Lee advances to the Class 1 Girls MSHSAA Wrestling Championships where she will compete as the first Lady Eagle state qualifier in Holden school history. Photo by Steve Edwards

“That makes her the first Holden girl wrestler to qualify for state,” added coach Jones.

Gudde guided the Eagles wrestling program in its first years during the time period when sectional tournaments were phased out, and MSHSAA transitioned to taking state qualifiers directly from the district tournaments.

This season, a sectional tournament round was added to take place after the district tournaments in order to reduce crowd sizes at the events.

“It was the perfect day for her,” noted Holden girls wrestling head coach Ron Franklin.

“Everything started out from the moment weigh-ins happened, and everything fell into place.”

Lady Eagle teammates Charlie Gregg and Aubree Castaneda joined Lee on the day to provide support to the sophomore.

Both Gregg and Castaneda, along with teammates Faith Brown and SamVanHooser were forced to sit out of district competition due to a Covid-19 quarantine experienced by members of the Holden high school wrestling teams late in Janurary into early February.

Lee would exit the quarantine a few days before her Lady Eagle teammates in time to compete at the district tournament where Lee placed third in her weight class two weeks prior to the sectional meet.

Gregg worked as a warm-up partner for Lee at the sectional meet in preparation for the day’s matches. “It helped a lot,” said Lee.

“Charlie coming since she couldn’t wrestle because she was quarantined for districts, that means a lot to me.

“She’s been practicing with me for the two weeks. Aubree is a big supporter. She’s my sister.”

Lee’s road to the 137-pound sectional title began to fall into place with a first-round bye when her first-round opponent from Branson scratched prior to the bout.

“They’re here, but I don’t know what happened to her,” said Lee. “I got a bye in the first round.” Marshfield wrestler Ariaha Mcillwain awaited Lee in the championship semifinal match.

Mcillwain recorded a takedown to put Lee down 2-0 early in the first period of the match.

Lee responded with a reversal, and a nearfall before pinning Mcillwain in the final seconds of the first period. “I was shooting in, and she had me pretty good,” described Lee. “Then she tried to pull me back. I just started rolling, and I just caught her. I got the pin. “I was nervous,” added Lee.

“I had Charlie and Aubree feeling my chest because I thought my heart was going to come out. “I was just so nervous. I won against the girl before, but that still doesn’t mean anything. She gave up a heck of a fight.”

Lee struck first in the title match with an early takedown of James.

A penalty point against Lee, combined with points from a reversal, and a nearfall for the Cassville wrestler gave James 6-4 advantage at the end of the first period.

Lee scored on a reversal late in the period for her fourth point. 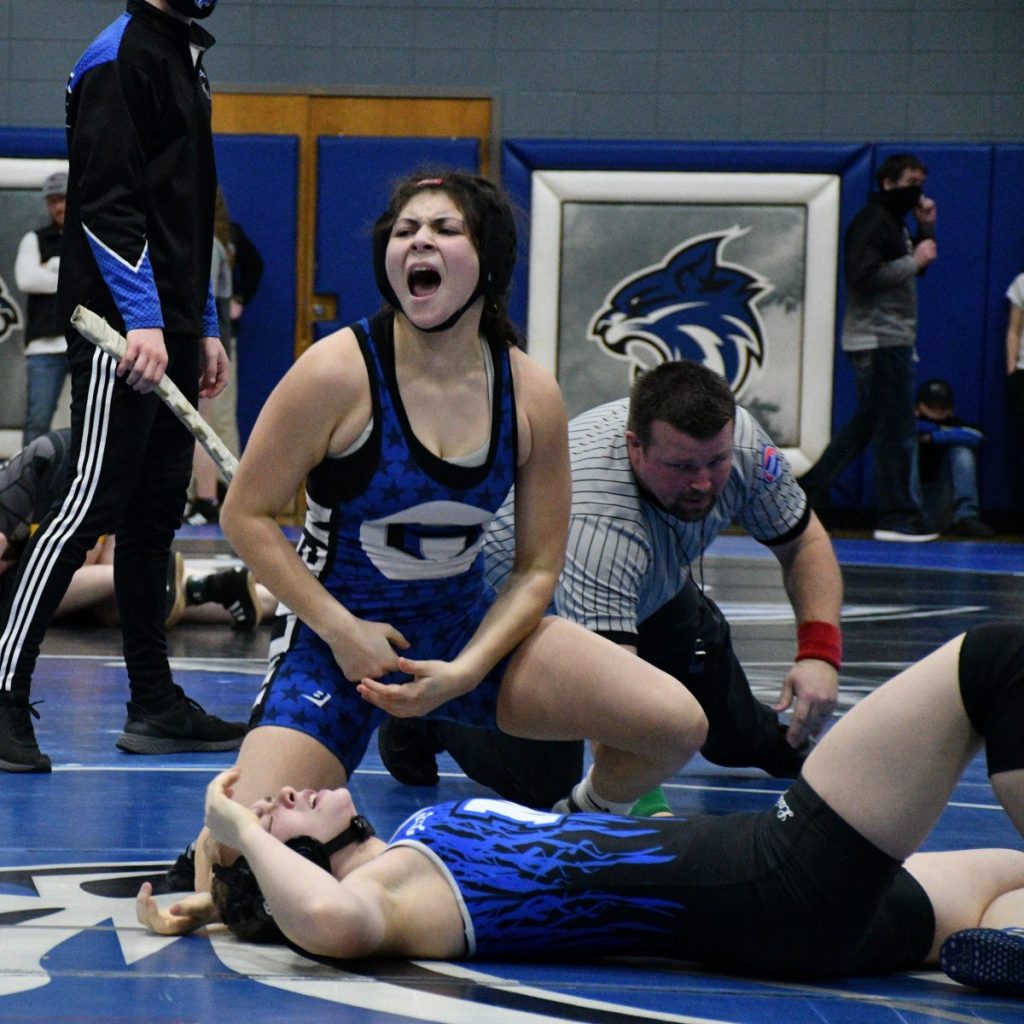 A point scored on an escape by James in the second period put Lee in a 7-4 hole.

On a takedown by Lee as she battled back, James suffered a leg injury which ultimately ended the match for James, giving Lee the win by injury default. “That’s a textbook double (takedown), that shot there in the finals,” complimented coach Franklin.

Last season as a freshman, Lee finished the district tournament one win away from a state-qualifying spot as she was guided by then-girls wrestling head coach Kyle Cahill.

“Last year, I lost in the bubble round,” said Lee. “It was really hard. I put my mindset to go to state this year.

My girls pushed me, and the guys, too. “My mom’s the best supporter that I have,” highlighted Lee.

She says stuff, and people do it.” The first-place finish at sectionals leaves Lee with a top seed entering the Girls Wrestling State Championships. “Tasia did everything possible to put herself in a good position,” said coach Franklin. “She had a great weekend.

She handled everyone that was brought to her. “She was third place in her district, and she ended up winning today. The whole bracket, it was like whoever had the best weekend…that’s what we had, we had the best day today. “I’m super proud of her. She works hard. She’s actually down a weight class from last year.

The impact of her accomplishments is not lost on Lee as she continues to raise the bar with her achievements as a member of the Lady Eagles wrestling team. “Placing at districts, then coming to sectionals, and winning sectionals is a lot to take in, but I worked so hard to get to where I want to be,” said Lee.

“Now I get to make a new goal. I’m making another name for girls wrestling, and encouraging girls to do the sport.”

The Holden Lady Eagles wrestling team posted a record of 20-1 during the regular season this year.

Lee’s historical season now continues with an appointment at the state championships as she comes off her sectional championship win carrying a 24-3 season record into the state tournament.