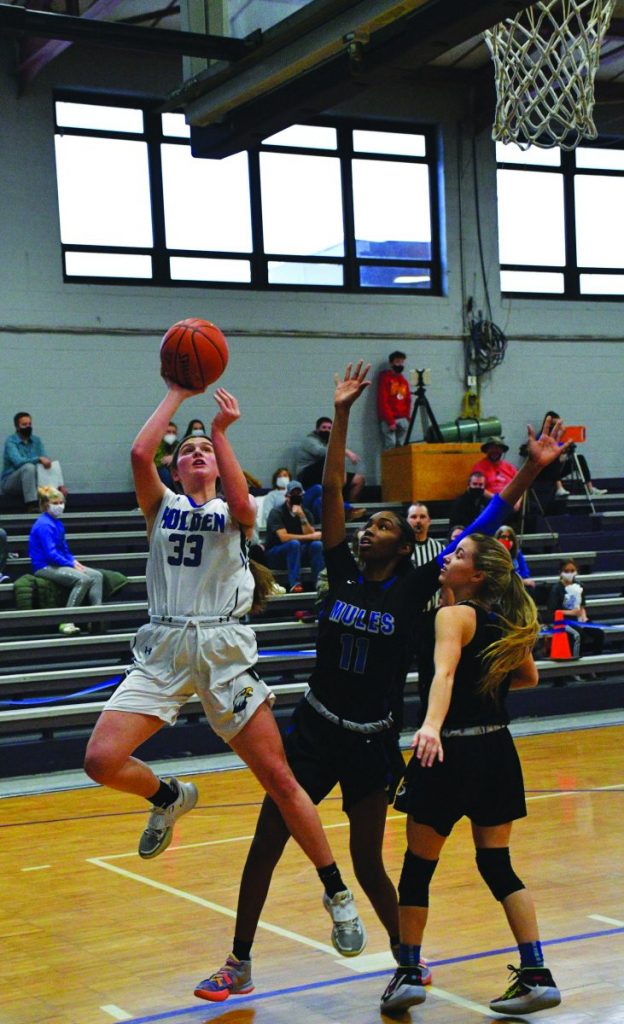 Drawing Attention… Lady Eagle guard Camille Davidson (33) draws defensive pressure from Lone Jack players Azailah Funches (11) and Melaina Heaton during Holden’s game against the Lady Mules in the first round of the Midway Tournament. Davidson made one of her two free attempts after drawing a foul on the play. The Holden girls basketball team held off a comeback attempt from the Lady Mules to take a 52-42 win in the game. Photo by Steve Edwards

The Holden girls basketball team fell to the host team Lady Vikings in the third place game of the Midway Basketball Tournament by the final score of 55-36 on Saturday, Feb. 13.

The opportunity to play in the third place game was set up by a first-round win over Lone Jack last Wednesday which was followed by a loss to first-seeded Archie on Thursday.

First Round Versus Lone Jack
The Holden girls basketball team held off an 18-point third quarter effort from Lone Jack by displaying steady point production throughout the game to take a 52-42 Lady Eagle win in the first round of the Midway Tournament.

“I thought we guarded about the best we have since being quarantined,” said Holden coach Ben Kiger as the Lady Eagles experienced a quarantine earlier in the season. “I also felt like we passed the ball really well. It was a very balanced game.”

After the Lady Mules opened with the first five points of the game that included a three-point basket from guard Melaina Heaton, Holden rattled off 12 straight points.

A three-pointer from Holden guard Leah Robinson followed by a basket from Brady Hinton tied the game at 5-5.

Camille Davidson put the Lady Eagles ahead with a basket. Abby Wamsley scored the final five points of the first period for a 12-5 lead.

Holden would score 12 points in each of the first, third, and fourth quarters, and posted 16 points in the second quarter with eight players putting digits in the final score column.

A shot from Holden sophomore guard Alli Iles doubled the Lady Eagles’ lead to 24-12 late in the second quarter as Holden worked to a 28-14 lead at halftime.

“In the third quarter, they hit four threes which brought the game a little closer,” noted coach Kiger.

Heaton led Lone Jack’s third quarter effort by knocking down a trio of three-pointers as the Lady Mules found a rhythm in the game which marked the team’s first competition after coming off a quarantine of their own.

Lone Jack forward Azailah Funches added a three-pointer, and five points for the Lady Mules in the third period.

Heaton scored another trey in the fourth quarter as part of Lone Jack’s 10 points in the final frame to give the junior guard 15 total points in the game on five made shots from beyond the arc.

“We had some big buckets from Marah and Leah in the fourth,” highlighted coach Kiger.

For Lone Jack, Heaton and Funches each scored 15 points. Kayda Kamolz and Kiara Carpenter each scored 3 points. Julia Stevens and Jillian Rogers each chipped in 2 points.

In the championship semifinal round of the Midway Tournament, the fourth-seeded Lady Eagles fell in a defensive battle to tournament top-seed Archie by the final score of 43-33.

The Lady Whirlwinds held a 17-12 halftime lead as neither team broke into double digit scoring in the first two periods.

“Our defense continued, and was even better than the night before,” said coach Kiger. “We struggled to score in the first three quarters. We did a better job of scoring in the fourth.”

Fifteen points from Holden, and 18 points from Archie in the fourth quarter marked a high-scoring close to the contest.

Third Place Game Versus Midway
The Lady Vikings steered themselves to a 55-36 win over the Lady Eagles in the third place game of the Midway Tournament.

“They had nine offensive rebounds in the first half, and really made us pay,” said coach Kiger. “This game really came down to rebounding.”

Davidson led Holden late in the game with 7 points in the fourth quarter on her way to a team-high 12 points.

“In the second half, we had Abby and Liz go down,” noted coach Kiger of Wamley and Stout each missing segments of the final two quarters with injuries. “We really struggled defensively when Liz went out. She does so many things that don’t show up on the stat sheet. Abby came back but was slowed down with an ankle.”

Stout put up 11 points before exiting the game with an injury shortly after the start of the fourth quarter.

Wamsley scored 4 fourth quarter points after aggravating a previous ankle injury on a pick and roll play in the third quarter. Wamsley finished with 6 total points.