Playing in the first round of the Stover Tournament, the Holden Lady Eagles basketball team (first seed) fell to the California girls junior varsity team (eighth seed) by the final score of 55-48 on Saturday, January 2.

Following a frenetic first quarter in which the two teams combined for 35 points, Holden held a 22-13 lead. 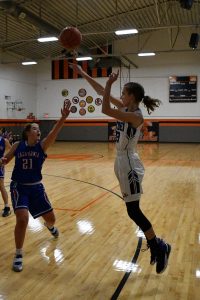 Pushing Ahead… Lady Eagle guard Leah Robinson (right) hits a three-point shot to give Holden a two-point lead late in the fourth quarter of Holden’s game against the California JV Lady Pintos in the first round of the Stover Tournament. The Lady Pintos used an advantage at the free throw line following Robinson’s basket to win the game by a final score of 55-48. Photo by Steve Edwards

The Lady Pintos chipped away at Holden’s lead in the second quarter to cut the Lady Eagles lead to four points for a 32-26 halftime score.

“I thought we came out in the third quarter, and didn’t look like an offensive team,” said Holden girls basketball coach Ben Kiger after the game which marked the Lady Eagles’ first contest after a two-week Covid-19 quarantine.

“We stood still…you could tell we’ve been off since the 11th (of December).”

At the third quarter buzzer, the Lady Eagles held a three-point lead with the score at 39-36 as California found a 10-7 scoring advantage in the period.

Successful trips to the free throw gave the Lady Pintos an advantage in the fourth quarter with California connecting on 10 of its 12 charity shots.

The Lady Eagles put three of their eight free throws through the net during the final period.

“Bottom line is they made their free throws down the stretch, and we didn’t,” said coach Kiger.

“I don’t know how many free throws we missed, but we sure didn’t make them.”

The Lady Eagles took a short-lived lead that was set up by back-to-back three-point baskets by guards Abby Wamsley and Leah Robinson.

Robinson’s shot from beyond the arc put Holden ahead 45-43 with just under two minutes to play in the game.

“Then we went down there, and we let somebody really split us and shoot a lay-up.”

That lay-up followed by a second basket made by California as the clock ticked closer to one minute to play in the game coaxed a timeout from the Lady Eagles bench with the Lady Pintos up 47-45.

Two missed free throws by Holden after the timeout were compounded by California with a basket for a four-point Lady Pinto lead.

As the Lady Eagles were forced to foul to put the Pintos on the line to extend the game, California connected on eight out of 10 charity shots in the final 30 seconds of the game.

During that same California spree, Liz Stout sank two late free throws for Holden’s final points of the game. “I really don’t think it was fatigue.

I think when you come across big moments, and sometimes you’re ready and sometimes you’re not,” noted coach Kiger as the Lady Eagles were hobbled not only from a two-week quarantine, but also had two practices cancelled due to bad weather in the week before the Stover Tournament.

“I don’t know that we were mentally prepared, and that’s on me.

That’s 100-percent on me.” The head coach added, “I didn’t think we moved particularly well on defense. We turned the ball over way too many times to give ourselves a chance. We can’t turn the ball over and miss free throws, and expect to win games. And you can’t stand around.”

For Holden, Stout and Camille Davidson led the team in scoring with 11 points.

Alli Iles connected on a free throw for 1 point. Coach’s Corner “I think this team is going to be in the championship,” said coach Kiger of the Lady Pintos team with the deceptive “JV” appendage.

“They’re a pretty salty team. I told anybody who would listen that I was more worried about this game than a four-five match-up.

“They shot the ball well and made shots, and we didn’t. It literally comes down to that. It’s definitely a disappointment.” Coach Kiger highlighted, “I told the girls in the locker room when you’ve got something like this you’ve got two choices in life, you can either put your head down, or you can hold your head high and come back out.

“Now we’ve got to come back and win two games, and stack wins.” The Lady Eagles basketball team was scheduled to play its consolation semifinal game on Tuesday this week versus the fourth-seeded Green Ridge Lady Tigers.

Game results were not available at press time. With a win on Tuesday, the Lady Eagles would play in the tournament consolation trophy game at 5 p.m. on Friday, January 8 in the dome at Stover High School.

With a loss on Tuesday, the Lady Eagles would play in the tournament seventh-place game at 5 p.m. in the high school gym at Stover High School.