The Jamestown Eagles boys basketball team (fourth seed) jumped out to a 16-11 lead after one quarter of play, and held on for a 52-46 win over the Holden Eagles (fifth seed) in the first round of the Stover Tournament on Saturday, January 2. 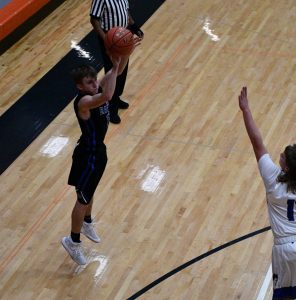 Spotting Up… Eagle guard Hunter Higgins drains a three-point shot during the second quarter of Holden’s game against Jamestown in the first round of the Stover Tournament. Holden fell to Jamestown by the final score of 52-46. Photo by Steve Edwards

A three-point basket by Holden guard Josh Taylor cut Jamestown’s lead to 39-36 at the end of the third quarter as Holden battled back in the second half of the game.

“It was a frustrating early-morning game,” said Holden boys basketball coach Nathan Martin in regard to the contest which tipped off at 9:30 a.m. to open the tournament.

“In morning games, one team always comes out flat, and it was us.

“It started off slow, really poor on the defensive side. “We gave up 16 in the first quarter, and I think eight of them were just lay-ups just from us being lazy.”

Jamestown’s scoring pace slowed in the second quarter, but three three-point baskets by Jamestown guard Mark Sorrels in the quarter for nine of the team’s 13 second period points put Jamestown ahead 29-21 at halftime.

Holden center Kole Shumate put in a basket off an assist by Daniel Taylor to open the fourth quarter.

Shumate’s bucket cut Jamestown’s lead to one point with the score at 39-38. Jamestown put together a 6-1 scoring run following Shumate’s basket to continue the trend of the contest that saw Jamestown distance itself as Holden would chip away at the lead, but not quite crack it.

Following a timeout late in the fourth quarter, Jamestown again put together a small four-point run to take a 49-41 lead.

Coming off a timeout called by Holden with just over a minute to play in the game, Jamestown displayed another three-point run before Holden guard Avery graves scored a late basket for the final points of the game.

“We made more shots than we normally have been, but it didn’t really matter when we played that poorly on the defensive side,” concluded coach Martin.

For Holden, Aiden Morarity led the team in scoring with 10 ponts.

Josh Taylor finished the game with 4 points, Hunter Higgins connected on a shot from beyond the arc to put 3 points in the scorebook.

Levi Rockhold chipped in a fourth quarter basket for 2 points.

Holden plays its second round game in the Stover Tournament on the consolation side of the bracket this week on Wednesday, January 6 at 5 p.m. Holden faces off against the eighth-seeded Calhoun Eagles in that contest.