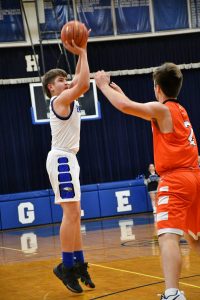 Selecting His Shot… Eagle guard Aiden Morarity puts up a shot from three-point range during the first half of Holden’s home game against Concorida on Tuesday, December 15. Though this shot missed for Morarity, the freshman guard connected on another attempt from beyond the arc, and a successive two-pointer to give the Eagles an 11-point lead early in the fourth quarter. Holden won the game by the final score of 60-52. Photo by Steve Edwards

In a come-from-behind performance, the Holden boys basketball team defeated the visiting Orioles of Concordia by a final score of 60-52 on Tuesday, December 15.

Momentum in the game shifted shortly before halftime when Eagle senior guard Daniel Taylor connected on two free throw shots after being fouled on a three-point basket with seconds remaining in the second quarter.

Taylor cut Concordia’s lead to 26-22 as the two teams headed into halftime with the tide turning toward the home team’s favor after Taylor’s charity shots.

“We needed that. It was a good thing that happened,” said Holden boys basketball coach Nathan Martin in regard to Taylor’s free throws before halftime.

“We came out lazy like we didn’t care, and it showed.

Just a little bit of energy in the third quarter helped.

“It’s good to finally get one,” added coach Martin after the win which marks the first win of the season for the Eagles.

The first quarter ended with Holden and Concordia knotted in a 12-12 tie.

Holden guard Avery Graves put the Eagles on the scoreboard with a two-point basket to answer Concordia’s 4-0 start to the game.

Taylor tied the game on a basket on an inbounds play for the first tie of the game at 6-6 before the teams exchanged the lead throughout the first period.

A three-point basket by Taylor put Holden ahead 9-6 late in the first quarter.

Holden center Levi Rockhold scored the final first quarter basket for Holden which Concordia answered with its own two points to set the score at 12-12 to start the second period.

The Orioles opened the second period with a basket to reclaim the lead in the back-and-forth contest. 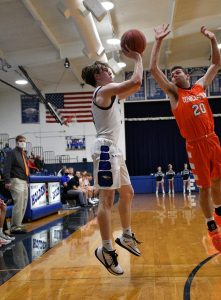 Turning Point… Eagle guard Daniel Taylor is fouled on this three-point shot in the final seconds of the second quarter of Holden’s home game against Concordia on Tuesday, December 15. Taylor would make two of his three free throw attempts for the final two points of the half. Taylor and teammate Avery Graves would combine to score the first eight points of the second half as the Eagles overcame a 26-22 halftime deficit to defeat the Orioles by a 60-52 final score. Photo by Steve Edwards

Taylor converted a free throw after being fouled on a made bucket for another lead change in the contest with the score at 15-14 in Holden’s favor early in the second period.

An eight-point run by the Orioles that put the visitors ahead 22-15 coaxed a timeout from coach Martin with under three minutes to play.

With the score at 24-17 in Concordia’s favor, Eagle guard Adam Comer sank a three-point basket to cut the Orioles’ lead to 24-20.

Following two made free throws by Jake Tagtmeyer for Concordia, Taylor streaked down the court in front of the team benches to the baseline of Holden’s basket where he set up for a three-point shot. On his release of the shot, Taylor was fouled by Austin Droege to give Taylor a trip to the charity stripe for three free throws.

Taylor connected on two of his free shots to set the halftime score at 26-22 with Concordia ahead, but the second half momentum in Holden’s favor.

“We let them get ahead at the beginning, so we were already coming back. We had momentum,” said Taylor in regard to the Eagles responding to Concordia’s early lead in the game.

“Making the free throws and getting the foul really helped us be positive in the locker room, and come out with a lot better game plan.

“It was just something we really needed to get that lead back,” added Taylor.

Coming out of halftime, Graves and Taylor combined for the first eight points of the third quarter with Graves scoring six of those.

That scoring spree put Holden ahead 30-26.

The Eagles would not relinquish the lead for the remainder of the game.

Concordia briefly tied the contest at 30-30 before Hunter Higgins answered the evened score with a three-point basket.

Eagle freshman Aiden Morarity would extended the Eagles’ lead to six points with the final basket for either team in the third quarter.

“Aiden is a freshman, but he’s one of our smartest guys,” noted coach Martin.

“He’s one of our best shooters, too. And he’ll get better as the season moves on. He does a lot of good things for us.”

Holden posted a 22-12 scoring advantage in the third quarter to put Concordia in the hot seat looking for their own comeback effort that was not meant to be.

In the fourth quarter Taylor stretched Holden’s lead to 11 points on a two-point bucket.

Higgins added a three-point basket, and Graves connected on two free throws to end scoring for the home team as Holden outscored the Orioles 16-14 in the final frame.

We have to play with effort and intensity, and do the things that we do right in practice right in this game.

We have to come out playing harder than them,” into the second half. “Credit to the players,” countered coach Martin.

“At halftime, we ripped them a little bit.

They came out with energy, and I don’t know what our second half turnovers were, but I am sure it was better than the first half.” Coach Martin credited Taylor’s and Graves’ noteworthy performances on the night.

“Daniel finally played a little aggressive. He dominates at practice.

“It finally showed a little bit what he does in practice every day.

Taylor finished the game with a season-high 16 points to lead the Eagles.

Graves finished with 12 points. Morarity totaled 8 points in the win.