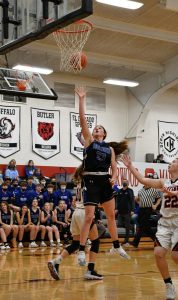 Soaring And Scoring… Lady Eagle point guard Camille Davidson drives to the basket for a lay-up in the fourth quarter of Holden’s road game at Sherwood on Tuesday, December 1. Davidson finished the game with 12 points as the Lady Eagles defeated the Lady Marksmen by a final score of 48-41. Photo by Steve Edwards

The Lady Eagles basketball team picked up its first win of the season with a 48-41 victory over the Sherwood Lady Marksmen last Tuesday, December 1.

Holden worked to a 25-16 advantage at halftime in the game, and held off Sherwood with key plays in the second half. “It was good to get a win,” said Holden girls basketball coach Ben Kiger.

“After getting a slow start, I thought we came out in the second quarter, and put some pressure on them.”

Lady Eagle leading scorer Abby Wamsley put Holden’s first point on the board with a free throw early in the first quarter, and added another free throw in the second quarter for a 15-10 lead.

Coach Kiger leaned on the depth of the Lady Eagle bench in the second quarter after guard Kayla Rokusek suffered an injury, and Wamsley picked up her second foul of the game.

“Kudos to Kalie Slack because she came in and played defense,” said coach Kiger.

“Kalie did what she does best, and played defense. “Another good performance was Hannah Bitzer.

She had six points. She was four-for-four on free throws,” noted coach Kiger of Bitzer’s performance off the bench.

Wamsley highlighted the response of the team after she picked up her second foul.

“I really had to just control myself help my teammates, but they kind of had to pick me up also,” said the junior guard.

“I kind of put them in that position after I got my fouls.”

Lady Eagle point guard Camille Davidson closed out scoring in the first half with a two-point bucket that came off an assist from sophomore guard Alli Iles.

“Even though she played a lot of games last year, she wasn’t our point guard,” said coach Kiger of Davidson.

Forward Liz Stout identified Holden’s key to taking the lead in the first half, and ultimately capturing the win.

“Going into the game, we all had a strong mentality,” said Stout.

“We knew this was a team that we could have won against, and obviously we did.”

Holden guard Leah Robinson connected on a three-point bucket shortly after Wamsley’s free throws for a seven-point lead at 30-23.

A three-point shot by Wamsley that spurred the Lady Eagles’ closed out the third quarter with Holden ahead 35-25.

“That three kind of turned the game, and it got our momentum up,” said Stout who added, “Alli had a few fast breaks.

Hannah had good free throws.” Wamsley would add another shot from beyond the arc in the fourth period, and end the game with a team-high 17 points.

“We had a comeback performance by Abby,” said coach Kiger. “Abby came down and she had two big threes.

She does what good players do. She finished the game with 17 points after being in foul trouble.

She picked up two early ones. I kind of thought that was why we were a little bit out of sync.” Coach Kiger continued, “I told them that we had to push the ball, and wear them out.

I thought we kind of did that in the second and third quarter.

“Even though we kind of started out slow in that third quarter, Leah had a really big shot in the third quarter, and Abby as the third quarter winds down had that three-point basket.” Wamsley noted, “I think in the first half we were playing to their speed, and I knew that we could have played better.

“We kind of came out in the second half, and we played together.

We got the ball moving, and we just hit some big shots which we really needed.

Davidson kept the momentum going in the fourth quarter with a two-point bucket on the offensive end that was followed by the junior point guard drawing a charge foul on the defensive end of the court.

Stout stifled a six-point Sherwood run by draining two free throws late in the fourth period to close out scoring for Holden on the night.

“We’re just trying to get through the first part of the year, and pick up some W’s,” summarized coach Kiger.

“I’m excited about this group. We have depth, and I think we have the chemistry.

“Alli Iles is going to be a really, really good player.

Wamsley scored 14 second half points to finish with her team-high 17 points.

Davidson hit double digits to finish with 12 points. Stout and Bitzer each scored 6 points in the game.

Robinson finished with 3 points. Hinton and Iles each scored 2 points.