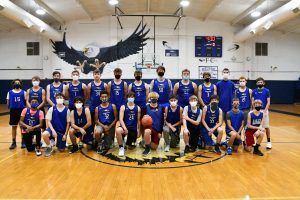 The Eagles boys basketball team tips off the 2020-21 season this coming week on Holden’s home court when Concordia comes to town Tuesday, November 24.

This year’s Eagles basketball squad will look to team depth as second-year head coach Nathan Martin and assistant coach Ryn Beenken incorporate some new systems on both offensive and defense.

“The guys have been working really hard in practice,” says coach Martin. “We are holding each other accountable, and pushing each other.

We are making some changes from last year. Coach Beenken and I are setting high standards for the guys.

“Each day we are adding a little bit of something new, either offensively or defensively. We still have a lot to put in, and work on before November 24.”

Taylor and Rockhold, and juniors Hunter Higgins, Jarrin Brown, and Kole Shumate return this season after playing varsity minutes last season as the team posted an overall record of 7-17.

This year’s Eagle offense will look to spread the points out as the team looks to replace the assets last season’s seniors brought to the team.

“We will have to replace a lot on the offensive side of the ball,” says coach Martin. “We have been working daily on putting in our new offense.

“The new offense creates movement off the ball, and involves all five guys which will hopefully create some open shots.”

Coach Martin reports Taylor has stepped into a team leader role this season.

“Daniel Taylor is our leader on both sides of the ball,” says coach Martin. “He communicates and rebounds well on defense, and we will need him to score if we are going to be successful.”

Rockhold has also been identified as a team leader by the head coach. Other players bring various skill sets to the squad.

“Kole Shumate is a big strong body that has good post moves on the block,” highlights coach Martin. “We will need him to stay out of foul trouble so he can help us rebound.

“Avery Graves did not get a lot of time last year, but has been motivated in the off season. He is an athletic lefty who will help both offensively and defensively.”

Higgins and Brown look to provide needed contributions as well.

“Hunter Higgins and Jarrin Brown both saw a decent amount of playing time last year as sophomores, and will be expected to carry more responsibility as juniors,” says coach Martin.

As noted, team depth will play a large role in the upcoming season.

“We will definitely be playing more players than we did last year,” confirms coach Martin. “We do not have roles completely figured out, but I do know that we are going to need our bench to contribute if we are going to be successful.

“Our team will be different this year. We don’t have a Jayden who averaged close to 24 ppg last year. Honestly, we could have a different guy lead us in scoring each night.”

The offensive system coach Martin and coach Beenken are developing in preseason practices should scatter sparks of opportunity for the team.

Several players are displaying the potential to contribute in the new system, according to coach Martin.

“Daniel Taylor, Hunter Higgins, Aiden Morarity, and Adam Comer have been shooting the ball well in practice,” he says. “Kole has looked really good around the rim so far.

“Avery Graves, Koty Pugh, and Jarrin Brown have been productive getting into the lane off the dribble as well as finding teammates for open shots.”

Morarity and Pugh are freshmen new to the team who will be looking for playing time.

Jacob Daniels joins Brown, Higgins, and Shumate to complete the list of juniors on the team.

Defensively, the Eagles will look to Taylor and Brown for guidance.

“Daniel and Jarrin really help us on the defensive side of the floor,” says coach Martin. “They are both great at communicating and have been consistently finishing the possession with a box-out.”

The conference basketball season for Holden kicks off on Monday, December 7 in a road game at Richmond.

The Eagles are coming off a 3-7 MRVC-East record from last year. Two of those victories came against Lexington. The other featured an overtime frame in a 77-76 win over Higginsville on Holden’s home court.

“Our conference will be pretty tough this year,” says coach Martin. “We are hoping to compete with each of the conference teams this year, and we want to build off some of the successes we had last year.”

With the first game of the 2020-21 season approaching, coach Martin framed the early-season portrait of this year’s team.

“We would like to match the seven wins from last year, and then improve on it,” he says. “We will be playing some guys who don’t have a ton of varsity experience. Hopefully, we can grow throughout the season.

“Coach Beenken and I have been asking a lot of them, and they have responded well. The guys are buying into the changes we are making, and really working to try and help make our team better.

The season opener for Holden on November 24 at home against Concordia begins with a JV game at 6:30 p.m. The varsity game follows with a scheduled start time of 8.