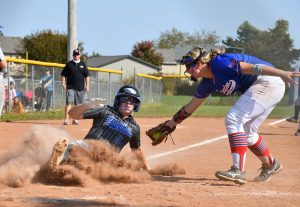 Dust Up… Lady Eagle Kayla Rokusek slides in under a tag during Holden’s second doubleheader game against Lexington last Saturday. The Lady Eagles claimed the MRVC-East Softball Season Title with a 26-3 win in the game as Holden moved to 9-0 in conference play at the end of the week. Photo by Steve Edwards

Holden defeated Leeton, Richmond, Higginsville, and Carrollton in succession early in the week.

The Lady Eagles closed out the week with a doubleheader sweep of Lexington to officially claim the MRVC-East championship sitting at 9-0.

On Monday, Holden completed the sweep of the MRVC-East season by knocking off Knob Noster.

Versus Leeton
Holden held off visiting Leeton by a final score of 6-5 in a non-conference game last Monday.

RBIs by Peyton Kilgore, Kayla Rokusek, Marah Klover, and Kimmie Spring in the second inning tied the game at 4-4.

Holden plated two runs in the fourth inning to take the lead.

Leeton put up a run in the top of the sixth inning. A strikeout by relief pitcher Maddie Sechrest with the bases loaded shut down the Leeton threat.

Neither team scored the remainder of the contest.

Kilgore got the start on the mound for Holden. In 3 2/3 innings, she struck out 2 batters, issued 2 walks, and allowed 4 runs.

At Richmond
Playing on the road last Tuesday, Holden took a 12-3 conference win over Richmond.
Eight runs posted by the Lady Eagles in the top of the first inning set the tone in the contest.

Marah Klover had a team-high 3 hits and drove in 1 run. With 2 RBIs apiece were Kimmie Spring, Camille Davidson, Liz Stout, and Peyton Kilgore. Stout and Faith Brown each had 2 hits. Spring, Davidson, and Kilgore each had 1 hit. Jocelyn McHenry had 1 hit and 1 RBI. Kierstin Redhair contributed 1 hit.

At Higginsville
For the second night in a row, the Lady Eagles posted a big first inning to take control in a road conference game on Wednesday.

Ten runs posted by Holden in the first inning boosted the Lady Eagles to a 18-8 win over Higginsville.

Camille Davidson had 3 hits, and 1 RBI. Kierstin Redhair had 1 hit, and 3 RBIs.

Liz Stout provided the only run of the game when she drove in Kimmie Spring on a single in the first inning.

“That was a game like we haven’t see before. The player of the game for sure was Maddie,” said coach Smith. “She pitched one heck of a game.

“It was a shutout with three hits allowed against probably the second best team in the conference, and they had been putting up 15, 18-runs a game prior to that.

“For her to step in, that was huge for her confidence and everything running into districts,” said coach Smith. “If she pitches like that, and we get the bats going in the district tournament, we’re going to be a tough team to contend with.”

Sechrest totaled 15 strikeouts in the game while allowing no walks in the shutout.

Stout had the 1 hit and the game-winning RBI. Sechrest and Faith Brown each had 2 hits in the game. Spring had 1 hit that set up Stout’s RBI.

Conference Clinch
Last Saturday, the Lady Eagles faced off at home against Lexington in a doubleheader.

In game one, Holden took a 16-0 win in a three-inning run rule shortened contest.

The Lady Eagles clinched the MRVC-East Softball Season Championship with a 26-3 win in a three-inning run rule shortened game.

“We got our nine wins, so that will put us at conference champs,” said coach Smith after the clinching victory. “We expected to come out and do that.

“Our goals at the beginning of the year were to win conference, to win districts, and also to improve and be playing our best softball at the end of the year.

“I think as of right now we are currently playing our best softball of the year which is good running into districts. As long as we keep that up, we definitely have an incredibly good shot, and we honestly expect to come out of districts on top.”

Kimmie Spring pitched for the first win against Lexington. Spring threw 2 strikeouts, and allowed just 1 hit in the shutout.

Kayla Rokusek racked up 4 RBIs on 3 hits. McHenry had 4 RBIs and 3 hits. Spring and Kameryn Rehfeldt each had 3 RBIs and 2 hits. Kilgore had 4 hits and 2 RBIs. Redhair totaled 3 hits and 2 RBIs. Brown had 2 hits and 1 RBI. Pearce and Stout each had 1 RBI on 1 hit. Klover and Tasia Lee each had 1 RBI. Klover was hit by a pitch once in both game one, and game two of the doubleheader.

Undefeated MRVC-East Championship Secured
On Monday, the Lady Eagles defeated Knob Noster by the final score of 18-8 to complete the MRVC-East season sweep in claiming the 2020-21 MRVC-East Softball Championship.

Look for the complete game article in next week’s edition of the Holden Image.

The Lady Eagles end the regular season with an overall record of 14-4, and an MRVC-East mark of 10-0.

On Tuesday, the Lady Eagles played Knob Noster in the first round of the Class 3, District 7 Softball Tournament. Results were not available at press time.

With a win on Tuesday, Holden would play Thursday, October 15 at 5 p.m. at Pleasant HS. The district championship game is scheduled for Saturday, October 17 at 1 p.m.