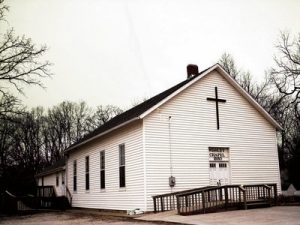 Standing as a beacon of light and hope for the community it has served for well over a century, Wesley Chapel United Methodist Church is still thriving and serving the Lord.

The old landmark, located on a quiet country lane north of Holden and Kingsville, has been standing sentry and spreading the Good News Gospel of Jesus Christ for 140 years!

Wesley Chapel was organized in the 1870s, with the first services being held in members’ homes. Later, camp meetings were held prior to the construction of a church building.

In 1880, Milas Russell donated the land for a church building and cemetery. Thus began Wesley Chapel’s legacy of serving the Lord and the community, a tradition church members proudly continue to this day.

Wesley Chapel’s name is credited to Daniel S. Jones, who died in 1875, and his was the first tombstone in the old cemetery.

John Long, a farmer and carpenter living in the community, contributed money and labor to build the Wesley Chapel church building.

Long was also the architect of the building and his memory is forever preserved at Wesley Chapel as he built the pulpit that is still in use today, 140 years later. The altar table was built by Bert Harber.

Local men helped construct the church, and those who lent a hand on raising the building were men from the Reese, McNeely, Dock, Ferguson, Wagoner, Jones and Welch families, along with many others.

Construction of the church cost $700, a lot of money back then! The original pews were used for many decades, and weren’t replaced until 1936.

Over the last 140 years, many changes and improvements have been made to the church building.

Wall-to-wall carpeting was added, as well as central heating and air conditioning. An addition was built on the west side of the building in 1978 by Truman Ford, with another addition in 1990, which was designed by the current pastor, David Mortenson.

In 2000, Tad Davis, Tim Hoover and Allen Davis poured a concrete pad at the front of the church to allow for handicap accessibility. 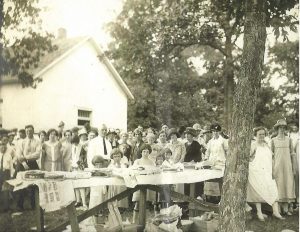 A church social at Wesley Chapel UMC in the 1920s , shows a gathering of the faithful.

A ramp was also built leading to the front and back doors. This was done using funds raised by C.J. Hoover for his Eagle Scout project. A brick sign frame was built by Marvin Craddock and Joe Walter, among other improvements the church has seen.

Although construction and additions continue to be added to the original church building, some things haven’t changed at Wesley Chapel.

The congregation continues to be passionate about loving and serving the Lord. Members still serve the community and missions projects in any way they can.

Over the years, many items have been donated to Wesley, some from church members, and some as memorials.
New screens for the classroom were given by Truman and Lillian Ford. The U.S. flag and Christian flag were bestowed in memory of Dallas Gard, by his parents, Mr. and Mrs. Russell Gard.

Altar cloths on the piano, pulpit and table, along with Bible markers, were given in memory of William Hughes by his daughters, Mrs. Lorene Nelson and Mrs. Ozell Barr. In 1971, an organ was donated by Rev. and Mrs. J. E. Simpson.

The church doors were given in memory of Chesley Wallace and Pauline Ludlam.

For many years Confirmation classes have been held at Wesley, and the lake across from the church was used for baptism by immersion. 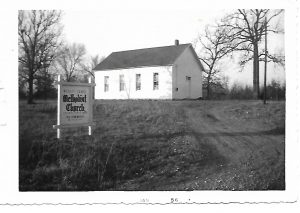 Over the church’s 140-year illustrious history, many revivals, church meetings, and fellowship gatherings have been held. These continue today as the congregation’s fervent wish is to spread the Good News of Jesus Christ and serve those in the community.

There are news stories of a prayer meeting that was held in 1881 that ran for several days, with Elder Stevens preaching.

In 1889, there was a woman preacher who led a protracted meeting.

In 1929, Carl Fortney held a church picnic at his home in the community.

The Wesley Chapel women were noted for their culinary abilities. They were often asked to serve dinners for auctions and farm sales in the area.

In 1947, Rev. Leon Chambers preached during a Ladies Aid meeting while the men were outside chopping wood.

Wesley Chapel has been led by a lot of Godly men and women throughout its rich history.

They have each brought their own unique personality and passion to the little country church. Arbra Williams played an electric guitar while he preached.

All have done their best to shepherd their flock and lead souls to the Lord.

In 1962, Wesley Chapel celebrated its 82nd anniversary with a homecoming event that was attended by more than 100 people.

In 1980, a 100th anniversary celebration was held with a meal, and morning and afternoon services. Dr. Charles Caldwell portrayed John Wesley, founder of the Methodist Church.

The little country church and cemetery have served the community well over its long, rich history, standing as a landmark and a beacon of hope in the neighborhood.

In 1998, a life-size wooden cross and a manger scene were made to display in the churchyard, just another way Wesley shares the story of the life of the Savior, Jesus Christ.

Since 1880, Wesley Chapel has been a lively and thriving small country church. Each year, Wesley has held many fundraisers, which include the annual ice cream social. 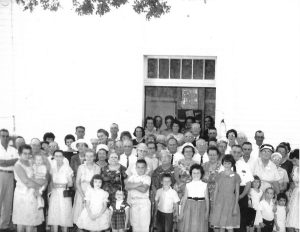 Wesley Chapel congregation – 1952 – Wesley was organized and construction completed in 1880.

The ice cream social, dating back to the 1920s, was just held this past Sunday at Wesley Chapel.

Although it looked a little different this year, due to the COVID pandemic, members made sure the iconic tradition continued, just as former church members have done throughout many decades.

Money raised at Wesley’s fundraisers has been used to send children to church camp, as well as being donated to the local food pantry and school districts.

Wesley Chapel continues to support community ministries and they work with the Holden Area Ministerial Association (HAMA), its food pantry, and other organizations.

Wesley Chapel’s current motto is, “A Micro Church with a Mega Heart.”

In a 2005 submission to the Holden History Book, then pastor, Laura Wilson, said this, “Wesley Chapel is alive and lively by the grace of God and Jesus Christ.

“We will survive even as we grow bigger and better. We praise God that we’ll always have the love, faith and teachings of a small, solid country church.”

The little country church still stands proudly in its lovely spot in the community, on a dirt road surrounded by majestic, age-old trees, continuing the mission that was started more than a century ago.

Church members continue the legacy begun by its founders, to preach the Gospel of Jesus and love and serve their neighbors.

Still going strong after more 140 years, the mission of the Wesley faithful is to continue the work started by their pioneer brothers and sisters in Christ in 1880.

The Wesley congregation is filled with the compassion, love and grace of the Holy Spirit and strive to share their passion and the love of God with everyone they meet.