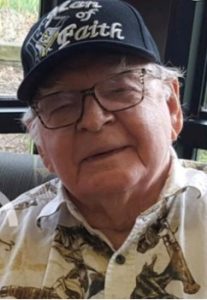 Bill enlisted in the Army and was stationed in Italy and received an honorable discharge in 1960.

Bill loved fishing on Truman Lake and visiting his Amish “family” to purchase vegetables and flowers.

Bill was preceded in death by his mother and father; seven brothers; and three sisters.

Family members will take Bill home and celebrate his life at a private ceremony in Brewton, Alabama at his plot he has waiting.