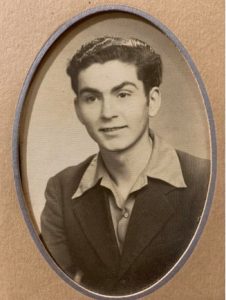 He was born on July 27, 1926 in Pittsville, MO, the son of Ivan Anderson and Ola Frances (Maloney) Martin.

On October 22, 1947, Ed was united in holy matrimony with Audria Katherine Daldrup at the old St. Patrick’s Church in Holden, MO.

Their marriage certificate was placed in a time capsule in the cornerstone of the new St. Patrick’s Church.

Ed was a member of the United States Army, serving his country during World War II.

He was an asbestos worker, installing piping and insulation.

Ed was of the Catholic faith. He was a member of the St. John LaLande Parish in Blue Springs, MO.

He was preceded in death by his parents, Ivan and Ola Martin; one brother, R.K. Martin; and one sister, Ola Marie (Martin) Rogers. A graveside service will be scheduled at a later date.