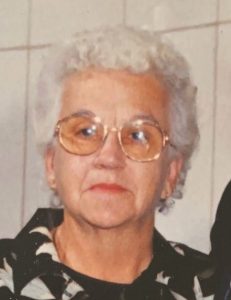 Helen Marie (Werner) Shore, 83, of Holden, MO, passed away Wednesday, April 15, 2020. She was born on September 29, 1936, in Bates City, MO, the daughter of Martin and Amanda Werner. On April 8, 1955 in Odessa, MO, Helen was united in marriage to the love of her life, Lewis Calvin Shore. Helen graduated from the Odessa High School in 1954. She moved from Lexington, MO to Holden where she lived for more than 60 years. Helen was a 4-H Leader in Round Grove. She owned and operated Harmony House in Holden, for 17 years, where she was known for making the most delicious homemade pies. Helen and her husband Calvin dearly enjoyed going on cruises and traveling together. Helen attended church at the First Presbyterian Church of Holden. She was a member of the Gamma Eta Masters Sorority for 39 years. Helen is survived by two daughters, Arline Aldrich and husband John, of Holden, MO, and Beverly Kephart and husband David, of Holden, MO; one sister, Ida Mae Penson of Holden, MO; two grandchildren, Tonya Simmons and husband John, of Holden, MO, and Michael Kephart and wife Liz, of Bates City, MO; and multiple very precious great-grandchildren. She was preceded in death by her parents, Martin and Amanda Werner; her husband, Calvin Shore, who passed away on March 22, 2006; one brother, Raymond Werner; three sisters, Vonita Eyestone, Marjorie Bruns and Georgia Werner; three brothers-in-law, Melvin Eyestone, Alan Penson and Ervin Bruns. A Memorial Service for family and friends will be held at a later date. Memorial Contributions may be made to the Holden Cemetery Association or the Holden Senior Citizen’s Center. Arrangements entrusted to Campbell-Cast Funeral Home, Holden, MO.